FMCSA regulations, for example, define how long a driver can legally drive as well as the driver’s rest obligations. Such regulations can be complex, and VTDRs help drivers track their hours accurately. They also safeguard transport companies by ensuring their drivers are following regulations and getting enough rest to reduce the risk of accidents.

In addition to monitoring vehicle operation, VTDRs can be used for crash forensics to help experts determine how an accident occurred and who might be at fault (Fig. 1). For example, Chinese regulatory commissions require that a VTDR keeps continuously recording and storing vehicle traveling speed and status signals for 20 seconds before the vehicle comes to a stop, at a time interval of 0.2 seconds.

1. Shown is a block diagram of a typical vehicle traveling data recorder (VTDR).

In both of those applications, it’s important for the device to preserve logged data during a failure event and be able to provide detailed information about why the system failed. While the requirements are clearly different for industrial and medical applications, many of the challenges of capturing device operational data with high reliability during a failure event are the same.

Storage of logged data must meet several stringent requirements. Foremost, the VTDR system must be able to (reasonably) survive a crash. This eliminates approaches with a physical element such as battery-backed SRAM, where a crash might disconnect the backup battery or capacitor from the memory. Thus, a native non-volatile memory that can hold data without a connection to power is needed.

For example, if the battery is disconnected from SRAM during a jarring crash, all data stored in the SRAM will be lost. Ideally, non-volatile storage is implemented using a single component, which minimizes its vulnerability to physical destruction. This approach also reduces overall component count, has a smaller PCB footprint, and doesn’t require periodic maintenance to replace batteries.

A native non-volatile memory must also have enough endurance to match the logging requirements of a vehicle over its lifetime. Consider an EEPROM with an endurance of 106 accesses before a cell typically degrades. At a record rate of 0.2 seconds, an EEPROM block would wear out in less than three days.

While non-volatile memory like NAND and NOR flash have a lower endurance than EEPROM, they’re more densely packed and less expensive (see table). Developers extend the effective endurance of flash through wear-leveling to avoid using blocks that have become unreliable over extended use. Wear-leveling involves tracking the reliability of each memory block and moving data to a new block when the current block begins to experience errors beyond a certain threshold.

Wear-leveling impacts reliability in several ways. When a block wears and must be moved takes time. If an event like a power failure or crash occurs during a block move, data may be lost. Even if data isn’t lost, wear-leveling adds complexity to the system, takes time to manage, and introduces latency. This potentially slows down the effective write performance of the memory at the critical failure moment the system is supposed to capture.

Non-volatile memory with a high endurance, such as ferroelectric random access memory (F-RAM), eliminates the need for wear-leveling. FRAM has an endurance of 1014 accesses—which is effectively unlimited in the context of the logging requirements of a VTDR—and can be controlled using any standard memory controller over a SPI interface.

Write performance is crucial for ensuring data is captured during a failure event. The faster data can be written to non-volatile memory, the shorter the window during which critical last-moment data may be lost. While the regulatory agencies are requiring updates only every 0.2 seconds, the industry is moving toward continuous real-time logging, and any latency that can be eliminated improves the reliability of the data log.

It’s important to note that write performance involves much more than just memory bus speed. Flash memories incur write delays because the correct page/block must be programmed in, and at minimum, a block must be erased before new data can be written.

The negative impact of working in blocks in an application such as data logging is reduced because the data log can be structured to buffer the data collected for a specific time interval and then written all together, a block at a time. However, there’s still a delay because the buffer is collected, and there’s additional “soak time” as the entire buffer is written at one time. When a failure event occurs, all of the data in the current buffer may be lost, potentially including crucial data about the cause of the failure.

Instead of block-based access, F-RAM supports random access. This allows data to be directly written into the F-RAM array rather than first being buffered. In addition, the next bus cycle can start immediately without have to check the readiness of the memory device. In effect, this enables F-RAM to perform write operations at the bus speed without incurring any of the write or internal page program delays associated with flash.

With random access and the elimination of write delays that other non-volatile memories incur, F-RAM is effectively able to “instantly” write data as it’s captured, thus preventing potential data loss when a failure event occurs. Thus, F-RAM can reliably store data up to the moment before impact. Again, the soak times of EEPROM and flash place this crucial data at risk (Fig. 2). 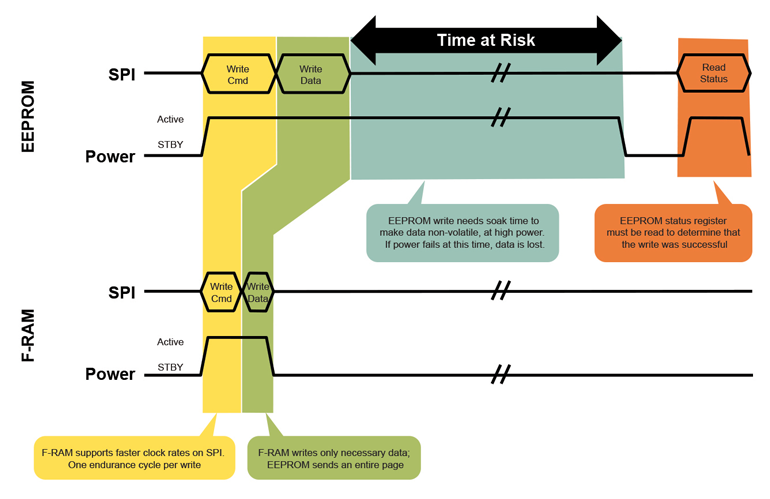 2. The soak times of EEPROM and flash place crucial data at risk. If a failure event occurs during this window of time, the data will be lost.

F-RAM further assures reliability with on-chip error code correction (ECC). Furthermore, F-RAM reads are destructive, meaning that any errors in the F-RAM array are detected and corrected data is written back into the array, ensuring greater reliability and increasing longevity of data.

As cars become more autonomous, data-logging devices such as VTDRs will likely play an increasingly important role. Technology is still some ways off from fully autonomous vehicles driving on highways. In the meantime, there are intermediate stages where the vehicle will assist the driver, i.e., advanced driver-assistance systems (ADAS). Data logging can help developers progress through these driver-assistance stages by providing critical data as to what a vehicle and its driver are doing when a crash occurs, both in terms of determining potential causes and failures as well as mitigating future accidents.

To achieve that, there’s an increasing need for greater memory densities in logging applications. For example, some vehicles may require recording of data from a tachograph—a device that automatically records vehicle speed, distance traveled, and driver activity. In Japan, regulations may require that tachographic data be stored and available for review for a full year. Tachographs typically utilize an 8-Mb non-volatile memory to retain this data.

Manufacturers may want to reliably store many other types of data as well. Long-term operational data logs can be analyzed to identify abnormalities and alert the driver to take care of potential maintenance issues to mitigate and prevent failures. Logs can be used to assess and improve overall vehicle efficiency, too.

For more fully autonomous vehicles, manufacturers may also want to maintain a log of critical code. Such a log would capture a mirror image of certain code sections to show what code a vehicle was using when it failed.

Given the harsh operating environment of a vehicle, it’s important to use memory that’s AEC-Q100-qualified and compliant with ISO 26262 functional safety guidelines. Excelon F-RAM developed by Infineon Technologies, for example, supports operation at up to 125°C and can store data up to 121 years at 85°C. High density F-RAM memories are also available on the market, with up to 16-Mb devices sampling early next year.

Data-logging devices like VTDRs are a standard system in many commercial vehicle applications. The data they capture is important to drivers, business owners, and automotive manufacturers. To assure the highest reliability, a single-component non-volatile memory is required that can provide physical robustness with low write latency and high densities. It’s shown that F-RAM memory provides the highest reliability among non-volatile technologies, giving manufacturers and drivers more confidence that critical operational data will be available when needed.