Dendrites are a problem in lithium-based rechargeable batteries. Over the many charge/discharge cycles, these tiny crystal growths form naturally on the lithium surface and create a kind of branching tree-like structure. Since these dendrites grow uncontrollably during charging of a lithium-metal cell—they’re like tiny wires that short-circuit and thus kill the battery—there’s been considerable effort to prevent or at least minimize this unwanted growth

One possible solution, in principle, is to physically press something against the lithium metal to suppress the dendrites. Although typical lithium-ion batteries have a liquid electrolyte that can’t press back, batteries using a solid electrolyte could apply enough mechanical pressure to hold back the dendrites, at least in theory. In practice, however, the dendrites still grow.

The reasons for this ability to grow despite restraining pressure aren’t well understood, but researchers at the California Institute of Technology (Caltech) are working to better understand the underlying materials science. A team led by Julia Greer (the Ruben F. and Donna Mettler Professor of Materials Science, Mechanics and Medical Engineering, and Fletcher Jones Foundation Director of the Kavli Nanoscience Institute) is investigating the mechanical properties of lithium at nanoscale dimensions. The objective is to analyze and characterize how these differ from the macroscale properties. Complicating the issue is that these dendrite growths can take on different sizes and shapes even in the same cell (Fig. 1).

1. Caltech’s research demonstrates the remarkable strength of lithium at nanoscale dimensions, where these growing “dendrites” can short-circuit or otherwise damage a battery cell. (Source: Julia Greer/Caltech)

Greer suspected that researchers had underestimated the strength of dendrites whereby the solid electrolytes weren’t strong enough to resist nanometer-scale dendrite growth. While macroscopic lithium is relatively soft (comparable to lead and tin), she says that many metals can be as much as two orders of magnitude stronger at microscale and nanoscale dimensions than they are at a larger scale—a truly significant difference.

Most experiments on mechanical properties have focused on thin films, Li foils, and focused-ion beam-carved Li. Here, the researchers developed an in situ experimental methodology that allows them to electrochemically charge small-scale battery cells and to observe, in real time, the formation of the dendrites as well as probe their mechanical response (Fig. 2). 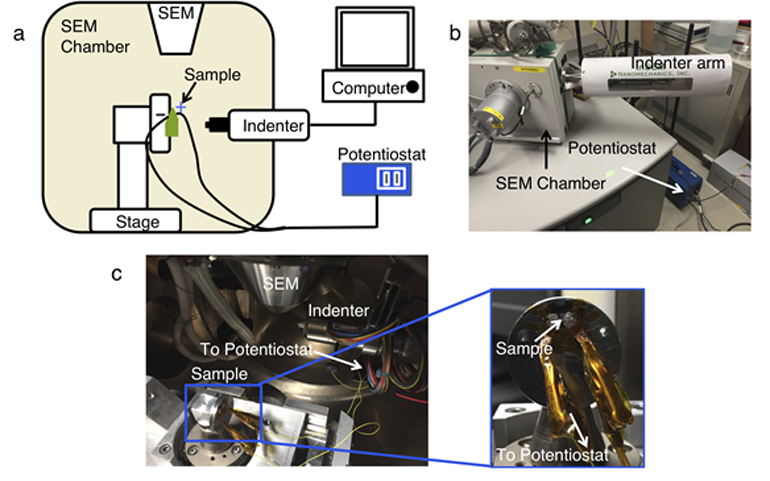 2. Shown is a schematic of the in situ electrochemical charging experiment (a). The photographs show the in situ instrument (b) and each component within the SEM chamber (c). The sample is mounted onto the SEM stub; clips that are connected to the potentiostat outside the chamber are attached to the Cu tape connected to the cell inside the chamber. (Source: Julia Greer/Caltech)

To test this hypothesis for lithium, and better duplicate the behavior of lithium dendrites in a real battery, they built a battery designed to grow pure lithium dendrites very similar to those that would form in batteries. They electrodeposited lithium in a commercial LiCoO₂/LiPON/Cu solid-state thin-film cell, grown in a scanning electron microscope (SEM) equipped with nanomechanical capabilities.

Their analysis of electrodeposited Li revealed a single-crystalline microstructure. Nanocompression experiments at carefully controlled strain rates (an important parameter) on nano-pillars with diameters of 360 to 759 nm revealed that their average Young’s modulus was 6.76 ± 2.88 gigapascals (GPa) with an average yield stress of 16.0 ± 6.82 megapascals (MPa)—24 times stronger than macroscale bulk lithium. The enhanced strength of lithium at the nanoscale level may explain why its dendrites can penetrate and fracture through solid ceramic electrolytes, which are much stiffer and harder.

The work is described in detail in their paper, “From Ion to Atom to Dendrite: Formation and Nanomechanical Behavior of Electrodeposited Lithium,” published in the journal MRS Bulletin. There’s also Supporting Information here and here, plus two videos here and here.