Getting the Best Servo Motor

This article originally appeared on Heidenhein.com and has been published here with permission.

Servo motors are electric motors that let engineers and designers precisely control position, velocity and acceleration. Like all motors, they are driven by magnets. The number of magnetic poles helps determine the motor’s characteristics: The fewer the poles, the faster the motor it can spin (rms), but the maximum torque will be lower. The converse is also true; the more poles, the lower the rpms but the higher the max torque.

Servo motors can use ac or dc current. With ac, the voltage’s frequency determines the speed; in dc motors, speed is directly proportional to the voltage. Brushed motors use conductive brushes (usually carbon) inside the cylinder that transfer current as they slide against the rotating commutator as it rotates. Brushless motors use electronics to distribute current. Servo motors can also be solid or hollow shaft.

There is a wide variety of servo motors, and they are critical for industrial and consumer machines and applications. This gives engineers and designer a lot of choices to pick from when selecting servomotors for their applications. To make the right choice, they should understand the factors that make servos suitable or not for their specific application.

Understanding the needs and selecting the best servo motor for an application is often called motor sizing. That’s because the relationships between speed and torque and the application’s needs determine the size of the motor and its relative force density. To calculate these, engineers must know the payload’s weight, the distance and time of the cycle’s movements, along with the rest/cooling in between; this is also known as the duty cycle. Rather than use distance with and time, distance with speed and acceleration can be used. The goal is to determine how long the payload is accelerating so that torque can be calculated.

Once the application is specified, identifying the peak torque, continuous torque and speed required narrows the search for the right motor. Torque and speed go hand-in-hand when selecting a servo motor.  To better understand the relationships between the two in a specific application, engineers rely on torque curves. They graphically show the relative torque and speed needed and whether they will be needed continuously or intermittently.

Continuous torque, also known as root mean square (RMS) torque, is a time-weighted average of torque during a complete cycle. It must fall within the torque curve’s continuous region to be able to maintain the required speed.

Peak torque is the maximum torque needed at any point during the cycle. Ideally, peak torque is in the torque curve’s intermittent region because it cannot be constantly maintained. If an application’s peak torque falls in the motor’s continuous region, then the motor is probably too big.

Speed, usually measured in rpm, is just as important as the payload’s weight when selecting a servo motor. Generally speaking, the higher the motor’s speed, the lower the possible torque. Low pole counts deliver higher speeds and lower torques because of several factors, including back EMF.

The closer the cycle runs to the motor’s limits, the hotter it will get. The motor used must be big enough remains at a manageable temperature so that it does overheat, but it should not be so big it ceases to be cost-effective. Once these relationships are determined, other important (but less-mission-critical) factors can be established. 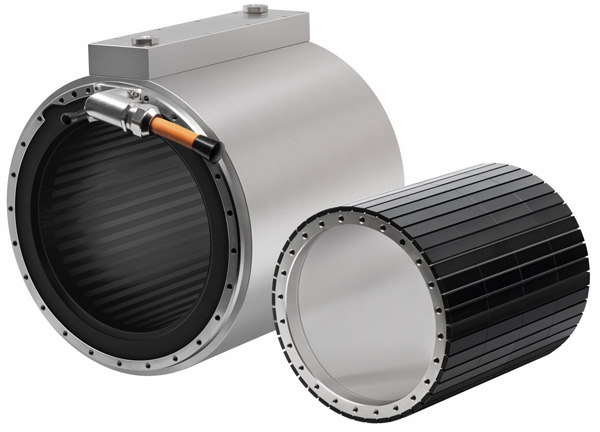 ETEL’s TMB+ synchronous torque motor consists of a rotor and stator and can also be equipped with an optional cooling jacket.

Identifying the speed and torque requirements will get engineers most of the way toward identifying the right servo motor. However, there are other factors and options regarding the environment and application that should be considered.

Gear ratio. Not all servo motors have gears, but many do. With the advent of direct-drive motors, geared motors are considered more primitive, but they can amplify the torque delivered by lower pole count motors. In a geared system, the servo motor turns a driver gear which turns another gear more closely connected to the payload. (There can be more than one gear pairing in a servo motor.) The ratios of the number of teeth between gear pairings determines the gear ratio. Once this is established, the standard torque equation calculates the motor’s real torque requirements.

Inertia. When dealing with rotation, the payload’s shape and mass create inertia when the motor and load accelerate or change direction. The motor has its inertia in the rotor, which is often negligible compared to the payload. The load also has inertia and any friction in the motion, such as pullies or tables, increases it. Inertia can be used when there is no known torque value; it is the mass in the F=ma equation when dealing with rotation.

Accuracy. A direct drive motor’s accuracy isn’t mechanically limited. The motor will be as accurate as the feedback given to the controller. That said, encoders are typically selected based more on what fits within the overall mechanical structure than the motor’s performance.

Environment factors. If the operating environment differs from standard room temperature, the motor’s performance changes. For example, the higher the ambient temperature, the lower the motor’s continuous torque capabilities. If the servo will be in a hot setting and/or it will be putting it out a lot of continuous torque, liquid cooling is a good option. The liquid should not come in contact with the motor’s mechanical components or electrical connections. Other environmental factors include contamination and vibrations, which can be common in places like paper mills, oil rigs or steel mills. Motors with specialized ratings, seals and housings are made specifically dirty, harsh settings.

Efficiency. The efficiency of a servo motor is simply how much current it takes to deliver its constant torque. This is referred to as torque constant (Kt) and can be found on a motor’s data sheets. Windings refer to how which the coils are wired relative to each other (in series or parallel). Windings with greater current efficiencies have lower speed capabilities, while windings with higher speed capabilities have lower current efficiencies. Once the required speed is known, the winding can be based on the more efficient option which still reaches the required speeds. 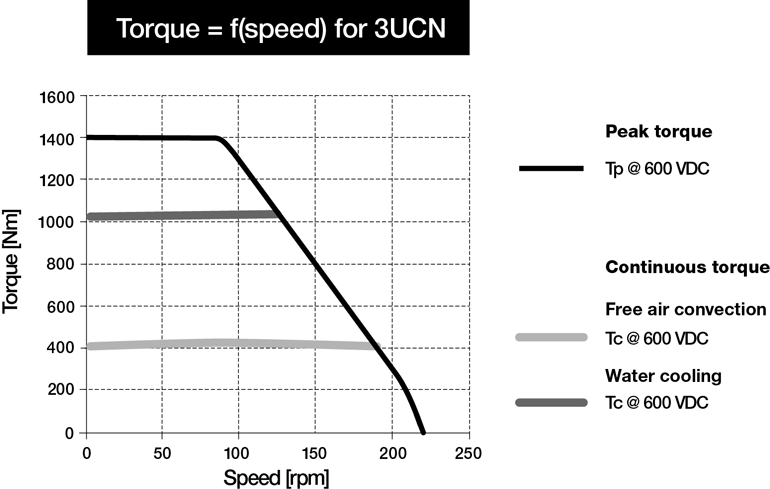 The relationship between torque and speed for a specific ETEL torque motor is shown in this graph from a datasheet.

Selecting the right servo motor starts with understanding the application, then establishing the characteristics of what’s moving and how it moves. From there, the key speed and torque requirements can be established which will significantly narrow down the motors to choose from. Other factors like environment, efficiency, accuracy and gearing should be considered. Of course, the order and priority of any of these can vary by application.

Experts at ETEL recommend dc, brushless, synchronous, high-pole-count servo motors with a dc power supply converting ac to dc. Brushless motors are more reliable, efficient and quieter than the brushed alternatives. And synchronous motors deliver more precise control, along with a high pole count. The company offers four winding options per size so that the motor can deliver the speed required in today’s automation and production environments.

For more information on servo motors, visit ETEL at www.etel.ch. You can also contact its U.S. representative, Heidenhain, at (847) 490-1191 or by visiting www.heidenhain.us.