We generally associate the term “semiconductor” with the phrase “solid state” as if they’re the same thing. That makes sense, given that our industry’s literal and figurative foundations are usually based on solid physical elements such as silicon, geranium, and gallium. Nonetheless, a whole world of “organic” transistors has attracted considerable attention and has little relation to those in the solid state.

Professor Dion Khodagholy, who directs the university’s Translational NeuroElectronics Lab, noted “Instead of having large implants encapsulated in thick metal boxes to protect the body and electronics from each other, such as those used in pacemakers, and cochlear and brain implants, we could do so much more if our devices were smaller, flexible and inherently compatible with our body environment.”

Silicon-based devices can’t function in the presence of ions and water; they need to be encapsulated in the body. Further, as electron-based devices, they don’t interact well with the ionic signals that the body’s cells use to communicate. Some organic materials have been developed to overcome these limits, but their electrical performance has been inadequate for the target applications.

In this project, the ionic conduction of organic materials is used to create ion-driven transistors from a composite of poly(2,3-dihydrothieno-1,4-dioxin)-poly(styrenesulfonate) (designated as PEDOT:PSS) and polyethylenimine (PEI). These enhancement-mode, internal ion-gated organic electrochemical transistors (e-IGTs) have embedded mobile ions inside their channels (Fig. 1).

Since the ions don’t need to travel long distances to be a part of in the channel switching process, they can be switched on and off quickly and efficiently. This results in devices with high transconductance and fast speed that can be independently gated to create scalable conformable integrated circuits.

They used these e-IGTs to acquire a wide range of electrophysiological signals, such as in-vivo recording of neural action impulses, and to create soft, biocompatible, long-term implantable neural processing units for the real-time detection of epileptic discharges (Fig. 2). 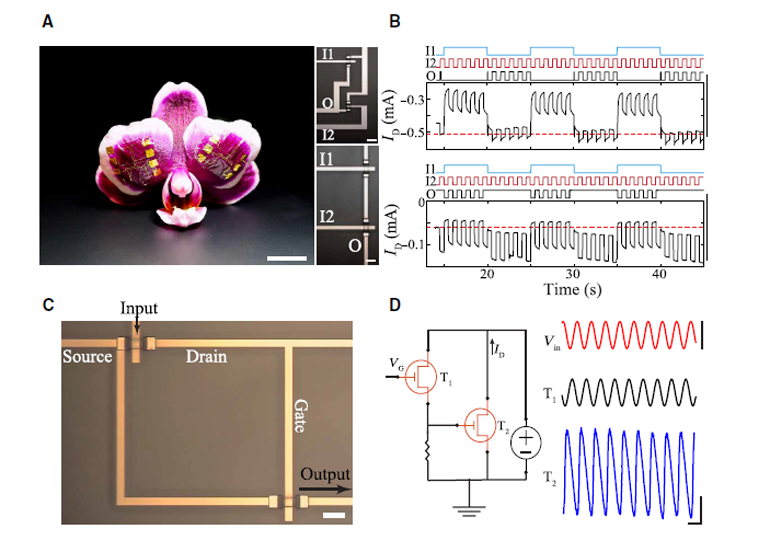 The material enables the creation of complex electronic components that traditionally require several layers and materials. It also enables easy and effective electronic bonding between soft materials, biological tissue, and rigid electronics. With its controllable electronic properties, MCP can non-invasively record muscle action potentials from the surface of an arm (Fig. 3) or monitor large-scale brain activity during neurosurgical procedures, such as implanting deep-brain stimulation electrodes. 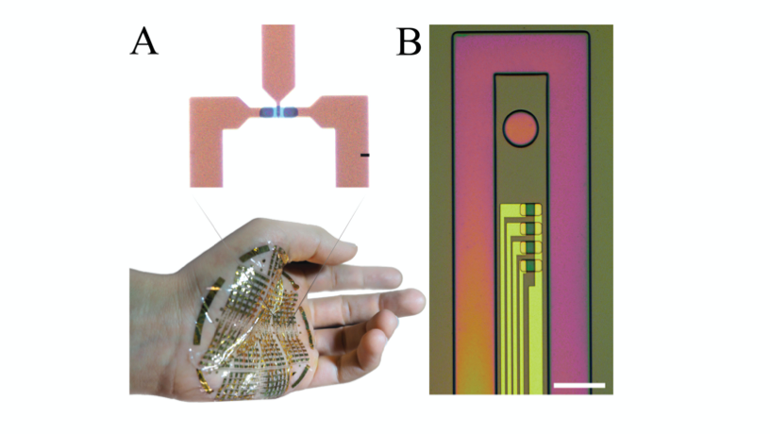 The researchers maintain that the base materials for these e-IGTs and MCPs are readily available and inexpensive. Prof. Khodagholy added that the next step is to transform these components into functional, long-term implantable devices that can record and modulate brain activity to help patients with neurological diseases such as epilepsy.

The work is detailed in two papers published almost simultaneously in different journals. Focused on the e-IGT, “Enhancement-mode ion-based transistor as a comprehensive interface and real-time processing unit for in vivo electrophysiology” is in Nature Materials (an unlocked version is here) and bolstered by Supplementary Information and this video:

“Mixed-conducting particulate composites for soft electronics” concentrates on the MCP and is published in AAAS Science Advances, along with Supplementary Materials and this video: