When the U.S. Department of Defense ordered the Air Force and Navy to improve mission- capable rates for key tactical aircraft, the challenge seemed daunting.

Systemic underperformance, low reliability rates and overcapitalization in fighter fleets were among critical issues at the time the memo was made public. The order, first issued by the former Secretary of Defense Jim Mattis in 2017, came at a time when readiness rates had fallen short of availability goals (hovering around 70% for the Air Force’s entire fleet) and when tactical aircraft were routinely operated beyond their designed service life. To date, readiness rates have remained largely static and options to improve them are limited. Retiring the oldest jets in the fleets has been proposed as part of a strategy that can both lower the overall number of planes and increase mission-ready percentages.

For Dr. Melinda Laubach-Hock, director of Sustainment at National Institute for Aviation Research (NIAR), Wichita, Kan., the challenge thrown down by the DoD was an opportunity to bring aging military equipment—airplanes built in the 1950s, ’60s, ’70s and ’80s—into the digital age. A program designed to keep the inventory of 62 B-1B Lancers operating in peak condition until retirement would not only be advantageous, but would also provide the DoD with the capability and autonomy to analyze its own aircraft.

The health of the B-1B Lancer has been hindered by mission-capable rates as low as 52%. And to keep the fleet going, the Air Force routinely pulls spare parts from the 309th Aerospace Maintenance and Regeneration Center (AMARG) located at the Davis-Monthan Air Force Base in Arizona. The site, known as the Boneyard, is a final destination and graveyard for old warplanes.

Dr. Melinda Laubach-Hock, director of Sustainment at National Institute for Aviation Research (NIAR), supervises all mechanics inspectors and is the program manager on the digital-twins program. Here she confers with Brian Ploutz, lead tear-down mechanic at NIAR.NIAR

Yet, as much as the idea of applying “cool, new technology” was an obvious answer, Laubach-Hock understood that any effort to digitalize systems would be futile without the engineering data or the deep-learning expertise required to support a “digital twin” program. She also knew the chances of getting OEMs to hand over data packages would be slim and that digital data did not exist for legacy aircraft anyway.

The B-1 bomber, first built in 1974 by Rockwell International, is now part of Boeing. “Going back and asking questions about how things were designed or why choices were made would be impossible,” said Laubach-Hock. “While Boeing had the airframe, they didn’t have the legacy that goes with it.”

Instead, building a highly detailed virtual B-1B aircraft model—the aforementioned digital twin—that could help the Air Force identify faults and predict the future of a supersonic bomber would have to be constructed from the ground up, said Laubach-Hock, who holds a PhD in aerospace engineering and has served NIAR for about 18 years. NIAR’s applied research, testing, certification and training for aviation and manufacturing technologies were ideally suited for the task.

The DoD has a history of being short-handed when it comes to engineers, said Laubach-Hock.  Even though NIAR’s engineers sit inside the program office to provide ongoing support, the goal is for the Air Force to own and maintain the data. “It is not our end goal to manage the airframe for them,” she explained.

What is a Digital Twin?

Digital twins go by many definitions. The ARC Advisory Group describes it as “a digital representation of an asset, product, or process that mirrors the behavior of its real-world counterpart.” According to ARC, true digital twins share three elements: context and characteristic data, real-time and operational data, and an information model used to integrate the two.

Viewed as an information sharing model, the digital twin provides a “chain of logic” that connects the tools, methods and decisions used to design, build, operate and validate an asset over its lifecycle, and may include design requirements, engineering drawings, 3D models, failure mode effects analyses, simulations, validation test data and pilot production data. Since the physical asset is connected to the virtual design model, a steady stream of performance information can be relayed about the asset in the field.

The multi-mission B-1B “Lancer” bomber can deliver an extraordinary quantity and diversity of weapons anywhere in the world within hours.Boeing

“When we talk about ‘digital twins,’ the first step is to create what we call the geometric twin, which means getting the geometry right,” said Laubach-Hock. “The first thing we’re doing is taking an airframe apart, piece by piece and cleaning it all up.” The process entails removing all of the dirt, dust, grime, sealant paint and primer down to the bare material. Then, high-fidelity scanners are used to trace a template of the parts. These templates are compared to the generic drawings from which the parts were originally manufactured and may expose all of the structural failure or damage. The parts are then modeled, compared to the template and any differences are notated. Finally, the parts are digitally reassembled into a digital airframe.

“There are many things you can do once you get the geometry right,” Laubach-Hock added. That includes creating a “global finite element model.” Once a load is applied to the high-fidelity engineering model, it predicts the reaction of the airframes through the entire life of the airframe, and it shows hotspots where engineers may need to inspect within a section. “For example, it allows the government to look at how long the aircraft can fly and provides engineering tools that most likely only the original equipment manufacturer had access to,” she explained.

Digital modeling solves other issues, too. In particular, Laubach-Hock points to parts obsolescence. “Even if the army wanted to get spare parts they couldn’t,” she said. “The main reason is machine shops in today’s digital age don’t want to start with a two-dimensional drawing. They want to start with a 3D drawing that they can put into a CNC, or whatever machines they have, and automatically process it.” 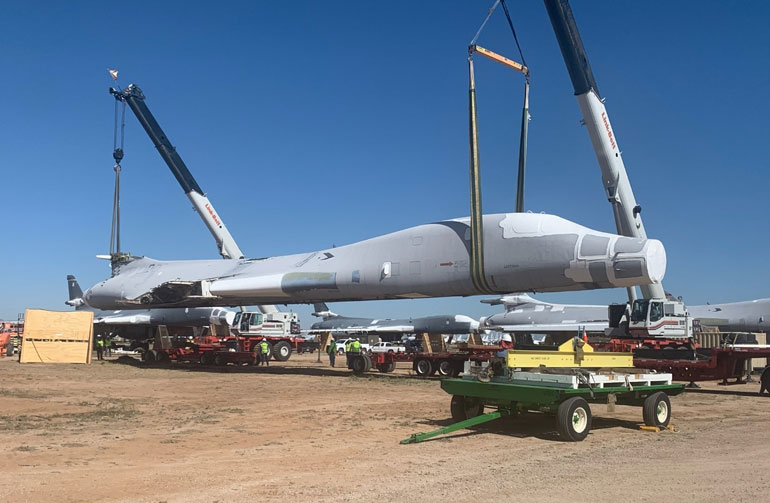 The B-1B tail is lifted and placed on flatbed trailers for the 1,000-mile journey to Wichita, Kan. The National Institute for Aviation Research at Wichita State University will create a digital twin that can be used for research.U.S. Air Force

Laubach-Hock noted that even when 2D drawings are converted to 3D parametric models, the original drawings tend to be in poor quality due to age. As a result, mistakes can be made when, for example, the number 3 looks like an 8. “If they don’t have the physical part to measure, that mistake can go all the way through production and you have a part that doesn’t fit,” she said, adding that NIAR now has the capability to provide a full 3D CAD model that can be sent to a CNC shop or somewhere else where a machine code translation process has to occur before machining parts. Developing 3D/additive manufacturing capability for printing parts that are neither critical nor affecting the safety of the airframe are crucial to the program, Laubach-Hock explained.

When NIAR’s digital twin work started in collaboration with the DoD in 2018, part of the plan was to add a layer of maintenance data, test and inspection results and analysis tools. To that end the program started on its next leg earlier this year when the aircraft’s 130-foot long fuselage was loaded onto a pair of trailers and hauled 1,000 miles from Arizona to Kansas.

“Transporting the B-1B was a monumental feat,” said Laubach-Hock. “The fuselage alone was half a football field long and three lanes of traffic wide. That was all done at our coordination, which was very scary and crazy all at the same time. I spent more time on the phone with the Department of Transportation and highway patrol…The Air Force talked about it in the press and said this program was the ‘tip of the spear’ for digital engineering. We’re also laying the foundational work for the digital twin to start as an airplane rolls off the manufacturing line.” 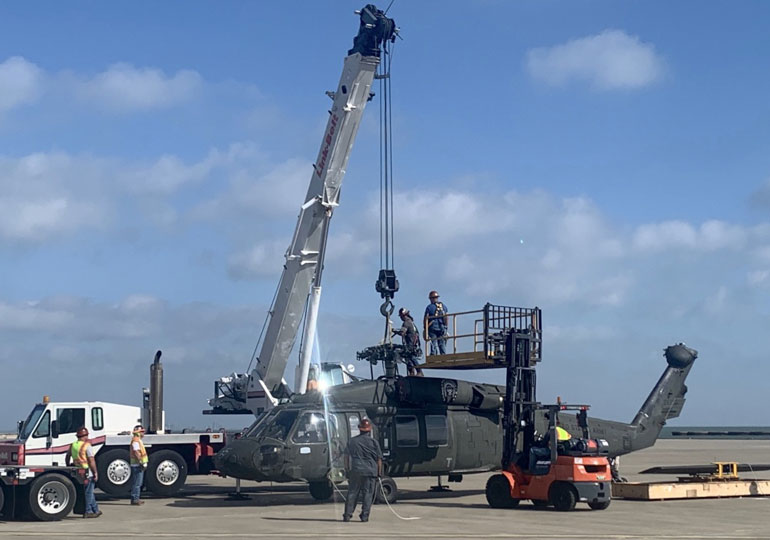 A UH-60L Black Hawk helicopter is loaded at Corpus Christi Army Depot in preparation for its trip to Wichita State University and the National Institute of Aviation Research (NIAR), where a virtual model of the workhorse will be created.Lisa Simunaci/U.S. Army Aviation and Missile Command

Extending the Life of the Black Hawk

NIAR’s B-1B digital twin is one of two such projects supporting airworthiness. The other is a virtual model of the Sikorsky UH-60L Black Hawk helicopter. The project is a partnership with the U.S. Army Aviation and Missile Command.

In line with the B-1B program, the aim is to leverage digital twin technology for the upkeep and sustainment of the Army’s aviation “workhorse.” Researchers are on course to disassemble one of the airframes and 3D scan each structural part in an effort to create a digital twin of the four-blade, twin-engine, medium-lift helicopter.

The UH-60L is powered by two General Electric T700 turboshaft engines and entered service in 1989. The model was an upgrade to the UH-60A aircraft’s airframe, which was introduced in 1978. The UH-60L is being replaced by the newer-build UH-60M aircraft.

According to Laubach-Hock, a virtual database of UH-60L parts will facilitate an on-demand process and source for replacement parts. In addition, the program will leverage robotics and machine learning to improve repair time of components that pose potential readiness risks to operations. 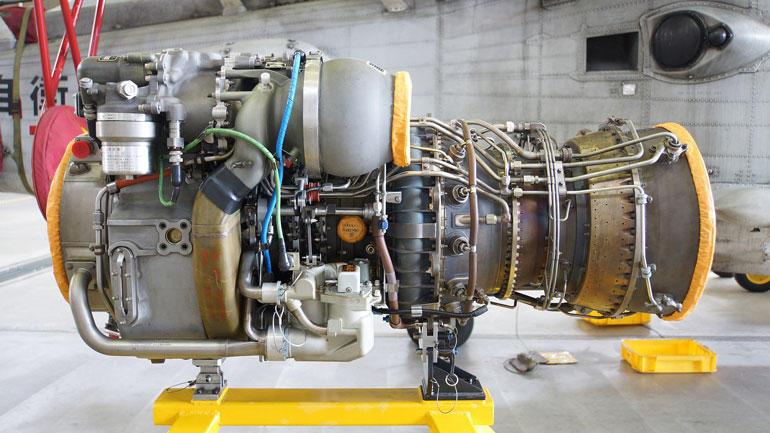 Across industries, a key driver for developing digital twins is that it serves different constituencies. According to a Gartner study of Internet of Things implementation across six countries—China, Germany, India, Japan, the U.S. and the U.K.—62% of respondents are either in the process of establishing the technology or plan to do so in the next year. The rapid growth in adoption is in part due to the notion that digital twins are delivering business value and have become part of enterprise IoT and digital strategies.

NIAR’s digital twin programs will offer the Air Force and Navy better control over the supply chain, including current knowledge of when parts are coming in and having control over engineering. “A lot of times we set very conservative inspection intervals that are based upon assumptions that the government may not understand,” explained Laubach-Hock. “And maybe they want to assume more risk and bring these aircraft down for maintenance less often…Right now, for the fleet of airplanes, we assume an average use. But what if you had one that was flown really hard? Maybe we need to bring that one in sooner, and delay maintenance on an aircraft that was flown for training.”

Condition-based maintenance is a catchword in the Air Force, contends Laubach-Hock. The approach assumes repairs should be based on the condition at the time, and it presumes the fleet is being managed in a very reactionary sense. Instead, Laubach-Hock noted that a predictive approach using digital twin technology will allow maintenance engineers to know in advance whether there’s a high likelihood that a part will need to be replaced and, in short order, ensure the supply chain has the part available to replace it.

“One of the biggest problems with depot maintenance is planes just waiting on parts to arrive,” said Laubach-Hock. “Where predictive maintenance comes into play is using the digital twin for tracking airplane parts, putting in inspection results and saying, ‘okay, this plane is still good to go for now and the next time it comes back in we’re going to need these five things.’ The engineering model that we’re developing will allow them to do engineering work that sees into the future…And now we can maintain the airplanes when it’s convenient to us, instead of the airplane telling us it’s done until it gets maintained.”