Researchers have developed a way to 3D print a full-size model of a patient’s heart.

Produced at Carnegie Mellon University by Professor Adam Feinberg and his team in the Departments of Biomedical Engineering and Materials Science and Engineering, the full-size 3D bioprinted human heart model uses a novel method, known as the Freeform Reversible Embedding of Suspended Hydrogels (FRESH) technique.

The 3D bioprinting technique was invented in Feinberg’s lab to fill an unfilled demand for 3D printed soft polymers, which lack the rigidity to stand unsupported as in a normal print. The realistic model mimics the elasticity of cardiac tissue and sutures.

A 3D printer was custom-made for the FRESH application to accommodate printing a human heart at full scale. The unique feature of the printer is that it included a gel support bath which encapsulates the heart. In addition, software changes were needed to maintain the speed and fidelity of the print.

In this application of 3D printing, a needle is used to inject bioink into a bath of soft hydrogel, which supports the object as it prints, noted the researchers. Once the model has been fully constructed, a simple application of heat causes the hydrogel to melt away, leaving only the 3D bioprinted object, reported the authors in ACS Biomaterials Science and Engineering.

The video below from the American Chemical Society demonstrates how the organ is produced.

Although full-size organ models have been replicated using 3D printing techniques, the materials tend to fall short in replicating the feel relative to the mechanical properties of natural tissue. The authors noted that soft, tissue-like materials, such as silicone rubbers, often collapse when 3D printed in air, making it difficult to reproduce large, complex structures.

The researchers used alginate, an inexpensive material made from seaweed that has material and mechanical properties similar to cardiac tissue. They also placed sutures in a piece of alginate to held even when stretched. The researchers said these properties suggest that surgeons could practice stitching up a heart model made from the alginate material. 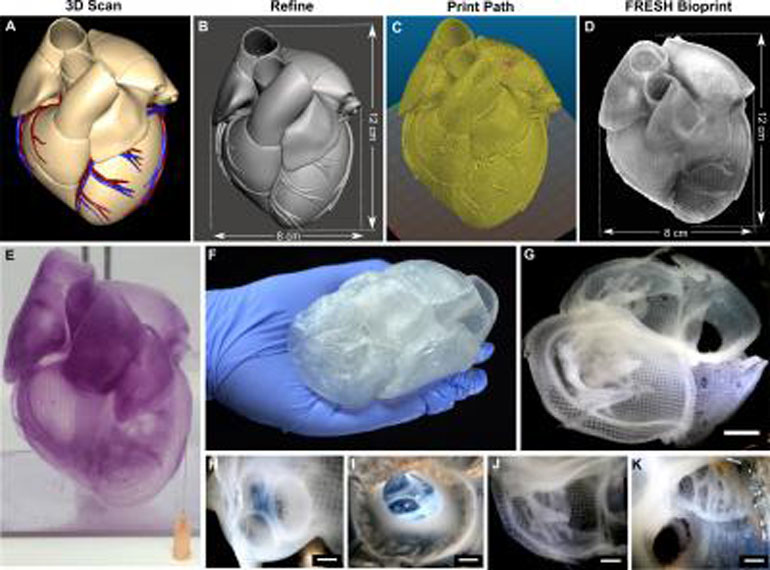 The research team used the medical device and magnetic resonance imaging (MRI) scans from a patient to model and print a full-size adult human heart, as well as a section of coronary artery that they could fill with simulated blood.

The heart model was structurally accurate, reproducible and could be handled outside of the gelatin bath. The method could also be applied to printing other realistic organ models, such as kidneys or liver, the researchers said.

The work holds immediate promise for surgeons and clinicians, as well as long-term implications for the future of bioengineered organ research. 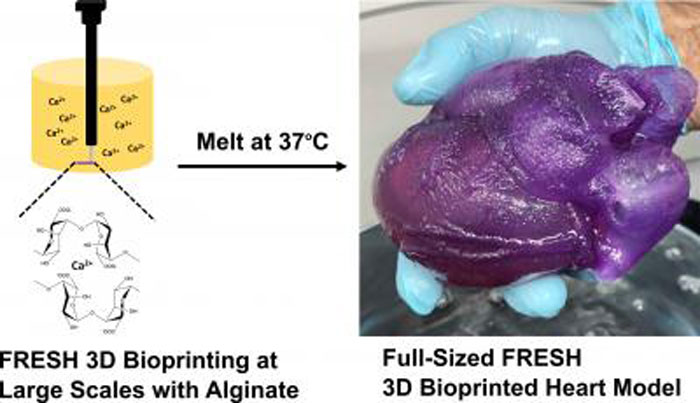 A needle prints the alginate into a hydrogel bath, which is later melted away to leave the finished model.Carnegie Mellon University College of Engineering

“We can now build a model that not only allows for visual planning, but allows for physical practice,”said Feinberg. “The surgeon can manipulate it and have it actually respond like real tissue, so that when they get into the operating site they’ve got an additional layer of realistic practice in that setting.”

As noted above, the paper was published in ACS Biomaterials Science and Engineering, and was co-authored by Feinberg’s students Joshua W. Tashman, Daniel J. Shiwarski, and Rachelle N. Palchesko, along with former student Eman Mirdamadi.