Marvell Technology is pushing ahead with plans to become one of the global leaders in chips for data centers and other infrastructure in the wake of its combination with an emerging rival.

Marvell has agreed to purchase Inphi for $10 billion in a cash-and-stock deal, adding another asset to its arsenal of networking products and deepening its relationships with customers in the cloud and telecom markets. Inphi is a major player in data movement interconnects that are used by companies to connect data centers—the vast warehouses of servers and other components that run cloud computing services—and 5G networks via optical cables.

Marvell, which has its global headquarters in Santa Clara, California, said the deal would create a combined company valued at $40 billion as consolidation grips the US semiconductor space. Marvell said the Inphi’s interconnect products, combined with its storage, networking, compute, and security lineup, positions it for “end-to-end technology leadership in data infrastructure.”

The proposed deal is the latest in a series of combinations in the US semiconductor industry. Advanced Micro Devices agreed to buy Xilinx for around $35 billion last month in an effort to diversify its product portfolio and expand its customer base in data centers. Analog Devices has also proposed to buy rival Maxim Integrated for over $20 billion to expand its scope in power management and analog chips crammed in cars, on factory floors, and other areas.

The combination would help it compete with larger rivals, including Broadcom and Intel, giving it the scale and influence to meet changing customer needs in a rapidly consolidating industry.

The deal would also open the door for the Silicon Valley company to expand its footprint in the networking industry, where it is already one of the largest players. “The importance of optical interconnects in terms of the value to customers will continue to grow,” said Raghib Hussain, who leads the networking and processors business unit at Marvell, where he plots out the company’s technology strategy. “The value is in the bandwidth,” he told Electronic Design.

Marvell has been looking to transform itself into one of the more formidable forces in chips used in data centers and 5G networks. Marvell says that it has assembled one of the most complete product lineups in the data infrastructure market, encompassing chips used for networking, storage, and security chores in servers. It is also selling what it calls the most popular data processing unit (DPU) on the market, which has emerged as a battleground.

It also competes with Broadcom, Intel and others in the market for Ethernet networking-switch chips used in corporate servers and cloud data centers for shooting out data on copper cables.

Inphi sells interconnects, digital signal processors (DSPs), and other chips that are rolled out in networking systems to connect vast shelves of servers in cloud data centers. The Santa Clara, California-based company is also used for ferrying information between data centers over long distances with optical cables. The same chips are also used to lash together the radio frequency, baseband, and other components of base stations and the rest of the 5G network. 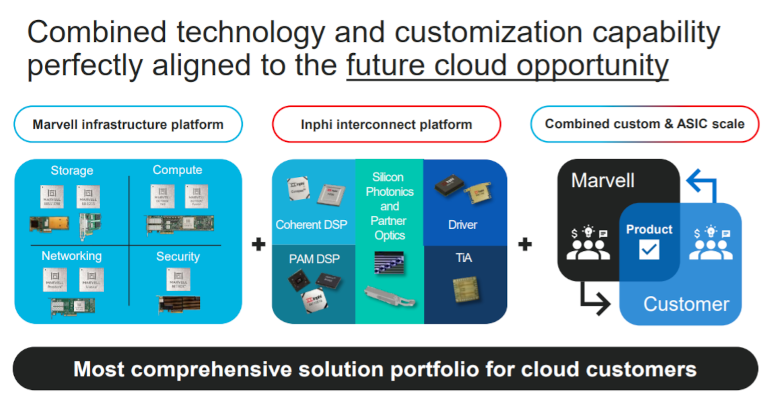 “Inphi’s technologies are at the heart of cloud data center networks and they continue to extend their leadership with innovative new products,” said Matt Murphy, president and chief executive officer at Marvell, in a recent statement. “We believe that Inphi’s growing presence with cloud customers will also lead to additional opportunities for Marvell’s DPU and ASIC products.”

Marvell said the deal would be very complementary, giving it more products to sell to attract customers and deepening its ties with many of the largest players in the technology industry. “We now not only have all the major building blocks—the storage, networking, computing, and security—we also have both short- and long-distance optical interconnects,” Hussain said. “The value of optical interconnects in data centers will increase by more than 10 times what it is.”

As technology giants grapple with the deluge of data, they are trying to move it all faster. They are supplementing these huge networks with optical interconnects that have higher bandwidth than the copper wires widely used in data centers, while consuming less power. That results in major improvements in speed and energy efficiency for the whole system, Marvell said. “In the future, more and more of the connections in a data center will become optical,” Hussain said.

Inphi’s customers include cloud giants Amazon, Google and Microsoft, and other technology titans such as Facebook, which use its chips for the optical connections in their data centers.

In the future, silicon photonics could also be used to coordinate the computer processors, accelerators, memory, and other parts within the same server, which are currently linked with copper wires. Marvell could also roll out products that add Inphi’s optical technology to the same package as its networking-switch chips or on server cards with DPUs and CPUs.

The networking chips it currently sells can support bandwidth of up to 100 Gbps on copper cables, while the optical interconnects from Inphi can support data rates of up to 800 Gbps.

Marvell has high hopes for the combination, which it expects to expand its total addressable market to around $24 billion. Marvell said that the deal could assist it in increasing its annual sales growth to more than 10% within a couple of years. The deal would also double the total number of $100-million cloud and networking customers it serves to eight, the company said.

The deal could also win it more market share in base station components. Marvell executives said that it could leverage its relationships with several of the largest manufacturers of cellular networking gear giants, including Nokia and Samsung Electronics, to open more opportunities for Inphi technology. “We will be able to provide them with a more complete platform,” he said.

The deal would give the new company a larger checkbook to invest in product development. Marvell’s scale would also help it handle the soaring cost of designing advanced server chips on state-of-the-art production processes. The heft has other advantages: Marvell said that it would wring out around $125 million in costs annually within 18 months of the deal closing.

Marvell said the deal would add to its adjusted earnings per share by the end of the year after the deal is closed out. The deal would not result in any changes to the company’s leadership, Marvell said.

“The two companies also share many cloud, carrier, OEMs, and module customers, so you can imagine a scenario where customers look at Marvell as a one-stop-shop for networking,” said Patrick Moorhead, technology analyst at Moor Insights and Strategy. He said that Inphi chips are “where networking is going, and I believe Marvell will be a much stronger company for it.”

The deal would also give it more intellectual property to use in the custom processors it builds for the upper crust of its customer base in the cloud and telco markets. Marvell has started to custom-design chips as a service for its largest customers, which are looking to replace more of the general-purpose chips in their data centers and networking gear with components built in-house. Marvell wants these customers to partner with it instead of working independently. 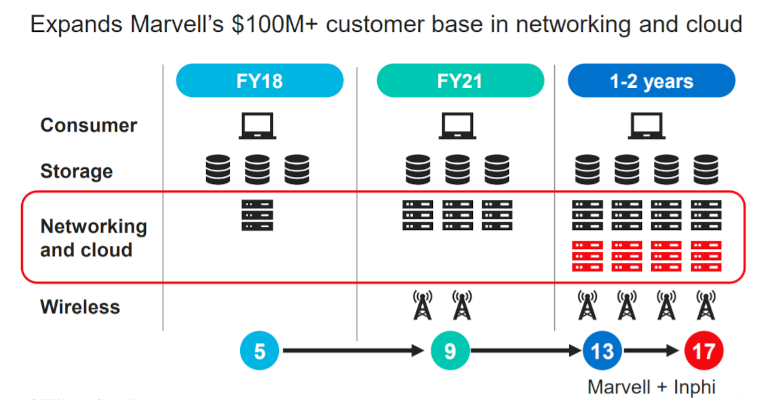 The deal would add to Marvell’s product development division with more than 900 engineers, and expand its vast portfolio of intellectual property with Inphi’s PHYs, DSPs, and other chips.

Marvell said that the companies could do more together than they could separately. Earlier this year, Marvell said that it partnered with TSMC, the leading contract chip manufacturer, to create advanced chips based on its 5-nanometer process. That has promoted it to the upper echelons of TSMC customers. Marvell could take advantage of its relationship with TSMC to roll out Inphi’s optical interconnects and other chips to a more state-of-the-art production process.

Under the terms of the deal, Marvell said that it would pay $66 in cash and 2.32 shares for every outstanding share of Inphi. That would represent a premium of more than 40% to the company’s market value prior to the deal, giving Marvell shareholders control of 83% of the combined company. The agreement was approved by the boards of both firms, and Marvell said it would pay for it with a combination of cash on hand and financing in the form of debt.

The deal is set to close by the second half of 2021, pending the approvals of shareholders of both companies. It is subject to customary closing conditions, including regulatory approvals.