When an airliner full of passengers at the gate experiences a failed component, often a valve or switch, the ground crew getting the plane ready to take off or the flight crew often manually overrides the failure. This lets the plane take off on time and meet its schedule. It also gives time for the airline to contact personnel at the destination to prepare for swapping out or repairing the failed part and look for a replacement aircraft if necessary.

This helps reduce downtime. It also avoids delays, including off-loading passengers and baggage while finding another aircraft. It should be noted resorting to the manual back-up is a one-time fix. The faulty part is fixed or replaced before taking off again.

One unsung player in this process is the flexible shaft used to transmit mechanical rotary motion, which actuates a valve or other component. The shaft must be flexible so it can be routed over, under and around obstacles to reach a valve that could located deep within an engine. The flexible shaft also lets the override control be mounted in a convenient position where the pilot or mechanic can remotely operate the components. The override controls are often located inside an accessible latched compartment.

Flexible shafts must be protected against heat, cold and vibrations.

Two components on airliners that often have this type of manual override are air-turbine-starter (ATS) valves and the anti-icing valves. The ATS valve controls compressed air as it goes from the ground or auxiliary power unit (APU) to the starter. The starter spins the engines to get them started on the ground, which then provide electrical power for instruments and cabin air. At this point the APU can be turned off. The anti-icing valves route hot air from the engines to the engine intakes and leading edges of the wings to prevent ice from forming.

A flexible shaft is a precisely defined and configured nested group of springs, tightly wound to give it torsional or rotational strength; this lets the springs bend, but also still rotate. They transmit rotary motion much like a solid shaft but can be routed around obstacles, such as the innards of an engine.

Almost all of commercial and military aircraft platforms in the air today (except Russian) rely on flexible shafts from S.S. White Technologies. More than one-half of U.S.-manufactured cars and second-tier global automotive suppliers also uses shafts from the company. 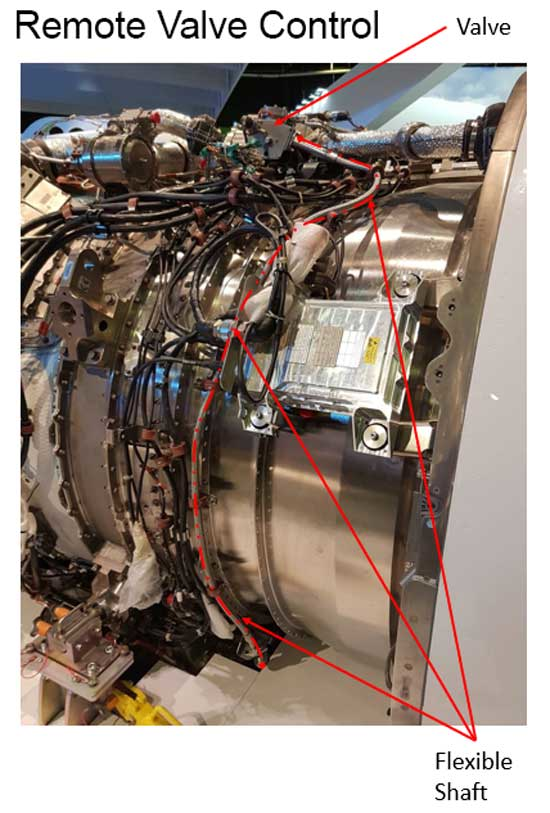 Here’s a flexible shaft running around a jet engine as part of a manual override system.

S.S. White engineers are experienced in dealing with the factors that go into designing and building flexible shafts for aircraft, such as torsional deflection, breakout torque, routing to minimize bends, vibrations and ergonomic/user interface issues, as well as temperature and altitude factors.

Breakout torque. This is the additional torque (rotational force) needed to overcome any initial stiction (the static friction that must be overcome to enable relative motion of stationary objects in contact). If a valve has failed to operate automatically, there may be an obstruction holding it in position. If that is the case, the initial torque applied to via the shaft might be higher to initiate movement than once movement has started.

Routing. The flexible shaft should not take too many turns and should avoid tight ones. This lowers stress and extends the life of the shaft. In addition, bends create internal friction and adds torsional deflection, which can lead to a loss of “feel” for the user. Each bend adds resistance, so they should be minimized. Reducing the twist angle reduces the lost motion, and so improves the user’s  feel.

Vibrations. A flexible shaft is subject to vibrations when stationary in an aircraft for long periods in the same location and orientation. It does not move unless there is a (rare) failure, so it sits in one position, vulnerable to failure from vibration. Also, if it is not used, maintenance staff have no way to determine if is operational. Therefore, engineers reduce the shaft’s exposure to extreme vibrations and do more analysis to determine the risk of such a failure. They may also support or restrain the shaft to minimize vibration’s effect.

User interface and ergonomics. Humans must use the controls so ergonomic factors include override controls’ location, the force needed to operate it, temperature of surrounding surfaces, and the need for gloves.

The interface that users places their hand or tool on to operate the shaft can take a variety of forms.

For example, there can be a male or female receiver for a standard wrench, or a crank handle that is part of the shaft assembly. In cold climates, maintenance crews might be wearing bulky gloves, so there should be enough space around the controls to accommodate the gloves, especially if crews must disengage a lock before turning the flex shaft. Similarly, if there are hot surfaces near the device, the shaft would have to be far enough from the operator to avoid burning them.

Temperature and altitude.  If an aircraft will be sitting on the ground in the dessert but then flies to somewhere cooler, the cold and moisture in the air surrounding the flexible shaft assembly will generate condensation—and can form water in the assembly. The design of the flexible must take the possibility into account.

There are two competing points of view on how to do this. One is to lubricate the shaft , which implies the override controls must be sealed to retain the lubricant. If it must be lubricated because of temperature or altitude, the seal must prevent air from cycling in and out,  which could let condensate build up and freeze.

The other method tries to keep the shaft dry. This is feasible due to the low number of operating cycles associated with an override. A non-lubricated flex shaft eliminates the need for seals but lets the changing external environment in . Water may enter and condense, so a drain hole would be needed at the low point.

In an aircraft, the electrical system operates automatically, but when there is a failure, flexible shafts can play an important part in manual override systems that can keep planes flying. Using flexible shafts in an aircraft improves serviceability ratings.

Steve Grimes is director of sales and marketing at S.S. White Technologies Inc.