When it comes to warding off COVID-19, suppression and mitigation are the two key health measures based on epidemiological modelling.

These two strategic non-pharmaceutical interventions—championed by policymakers and health authorities to reduce contact rates in the population, and thereby reduce transmission of the virus—distinctly include a recommendation to avoid discretionary travel to protect against the spread of airborne pathogens.

According to Qingyan Chen, a Purdue University air quality expert, air conditioning systems in small spaces are not designed to filter out particles as small as the coronavirus. The way air moves through the air conditioning system in airplane cabins could transfer to other passengers sitting in the same row as an infected passenger, or even those sitting in a neighboring row. “The further away you’re sitting from a person who is infected, the better,” said Chen.

The same holds true for cruise ships. Chen, who is Purdue’s James G. Dwyer Professor of Mechanical Engineering, said it remains standard practice for the air conditioning systems of cruise ships to mix outside air with inside air to save energy. “The problem is that these systems can’t filter out particles smaller than 5,000 nanometers,” he explained. “If the coronavirus is about the same size as SARS, which is 120 nanometers in diameter, then the air conditioning system would be carrying the virus to every cabin. Cruise ships could minimize this problem by just using outside air and not recirculating it.”

Qingyan Chen recreates the passenger compartment of a commercial airliner. His research aims to develop a system that uses mathematical models and sensors to locate passengers releasing hazardous materials or pathogens inside airline cabins.

The underlying problem with current transit ventilation systems is that we don’t know who is infected and where the individual may be located on the mode of transport. That is why it would be advantageous to change the design of ventilation systems in buses, trains, airplanes and cruise ships over the long haul, said Chen, whose lab is currently developing a ventilation system that would prevent the spread of pathogens by allowing passengers to breathe in only their own air.

Chen’s research encompasses the spread of air particles in passenger vehicles and how to track it. His work includes using mathematical models and sensors to locate passengers releasing hazardous materials or pathogens inside airline cabins.

In a recent model, Chen proposed a ventilation system that would maintain thermal comfort and reduce airborne contaminant transport in airliner cabins by having individual diffusers installed on the floor under the seats. The design would present minimal obstruction to passenger legroom, and the units would supply clean air directly to passengers in the row behind. Air would be extracted at the ceiling level.

As passengers generate heat, Chen explained, the air around them produce thermal plumes, which then travel upward and carry exhaled contaminants from the passengers to the exhausts. The system combines the advantages of under-floor air distribution and displacement ventilation, directing the older air away without mixing with the supply of fresh air.

Chen has investigated the impact of gaspers on cabin air quality in a seven-row section of the fully-occupied, economy-class cabin of Boeing 767 and 737 airplanes. He found that in current ventilation models, it is not clear whether gaspers in the cabins actually improve the air quality. According to the research, the distribution of opened gaspers can influence the infection risk for passengers. The study also reported that even though the gasper supplies clean air, it is possible for it to have a negative impact on the passengers’ health. “Statistically speaking, the overall effect of turning on the gaspers meant infection risk for the general population was neutral.”

Chen also flagged research at the National Institutes of Health, Centers for Disease Control and Prevention, UCLA and Princeton University, which found that COVID-19 was detectable in aerosols for up to three hours. “Through typical ventilation systems the air is replaced every 10 to 12 minutes,” he said. “In the airplane, the air will be replaced every two or three minutes. So, if the virus could stay airborne for three hours, it means that it could come into a room 15 times before it dies. And that’s very dangerous. One thing we could do is change the filter to a HEPA filter. 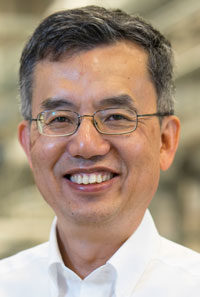 Qingyan Chen, Purdue University’s James G. Dwyer Professor of Mechanical Engineering.“A high-efficiency particulate air filter will filter out the particles 0.3 microns in diameter, are larger, and [have] an efficiency of 99% or higher,” Chen continued. He further advocated for having a HEPA filter incorporated into the design of a personal HEPA filter at every airline seat.

Chen cautioned that his new model is not impenetrable: “Viruses are not like solids. It is fluid and you still have some mixing of air with your neighbor. But we try to minimize the mixing. So it’s much better, but not bulletproof.”

He said his lab’s research is supported by Boeing and is under consideration for design. “However, change is slow because you must make sure you don’t bring any negative impact to other components of the plane,” he noted. “It will take a couple of years to implement it.”

Chen’s past research includes models for showing how the H1N1-A flu and other pathogens travel through aircraft cabins.