EV-lutionary Catalysts: Electronics Accelerates the EV’s Journey to the Mainstream

In the world of automotive events, the 2020 Philadelphia Auto Show is a well-respected, but second-tier affair. With the exception of SSC unveiling its Tuatara, a 1750-hp, 250+ mph hypercar, there was a distinct lack of major product introductions, flashy concept cars, and other market-defining announcements normally found at top-tier events held in the likes of Detroit, Geneva, or Milan. Yet the very ordinariness of the Philly show made it a great place to get a sense of how far along electric vehicles are along the adoption curve, and what, if any, plans manufacturers have to accelerate their entry into the mainstream market.

These questions are important to Electronic Design’s readers because, if EVs succeed, their extensive use of advanced power systems and other electronic technologies will make them a major source of innovation and opportunities for semiconductor makers, EEs, and many other players in the tech sector. Many semiconductor makers and component makers are already betting heavily on an electric future.

Although EV sales haven’t met expectations so far, there’s a growing consensus that the question is not “if,” but “when” they will begin to occupy a significant fraction of the market. That answer may be found in Electric Vehicle Outlook 2019, Bloomberg’s annual long-term forecast on electric transportation. It predicts that EVs will reach cost parity with conventional combustion-engine vehicles before the end of this decade and overtake them in sales volume by 2038 (Fig. 1). It predicts similar trends for light- and medium-duty commercial vehicles, and much faster adoption for buses. 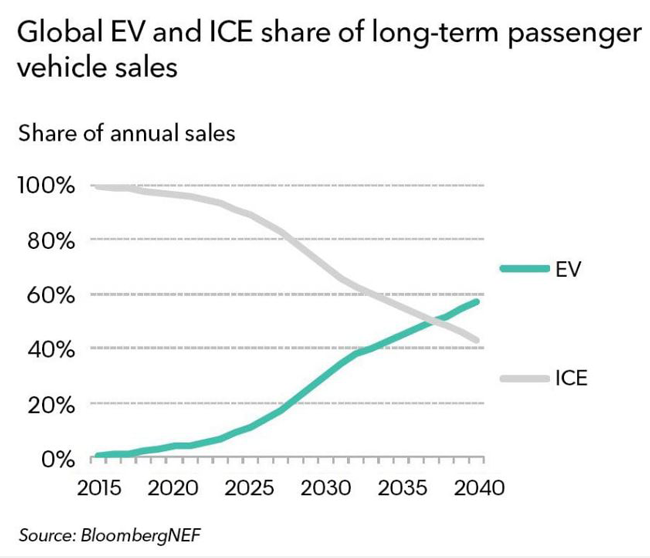 1. Wall Street is betting that electric vehicles will begin to displace fossil-fueled vehicles in the next five years. (Courtesy of BloombergNEF)

Clues from the Show Floor

At first glance, the Philadelphia Auto Show’s exhibits would lead one to believe that EVs are doomed to continue serving a relatively small niche market. There were only a few more electric models on display than last year, reflecting their modest 2% share of U.S. auto sales and 2.5% of global sales in 2019. But looks can be deceiving. A day’s hike around the show floor revealed several subtle, but important, indicators that EVs and plug-in hybrids may be at an inflection point. I’ll explain why after a quick recap of what we saw there.

My photographer and I began our trek with visits to several luxury vehicle makers. Although high-end cars constitute a small fraction of the market, Tesla effectively used that segment to create awareness and demand for EVs. Since then, many auto makers have followed suit.

No tour of the show’s EVs would be complete without checking out the Porsche Taycan Turbo, designed specifically to compete with Tesla for the title of the world’s fastest production EV (Fig. 2). Its 482-hp motor is fed by 93-kWh 800-V(!) battery. The higher voltage was chosen to reduce the size (and weight) of the wiring required to deliver up to 750 hp worth of juice when the Taycan’s “overboost” mode is engaged. The beast can hurtle from 0 to 60 in 2.6 seconds, and has a top speed of 160+ mph, but only gets around 200 miles out of its supersized battery—a shortcoming that has caused a bit of controversy in the auto community. This appears to be the only electric on Porsche’s horizon, although they will continue to offer plug-in versions of its Panamera and Cayenne models. 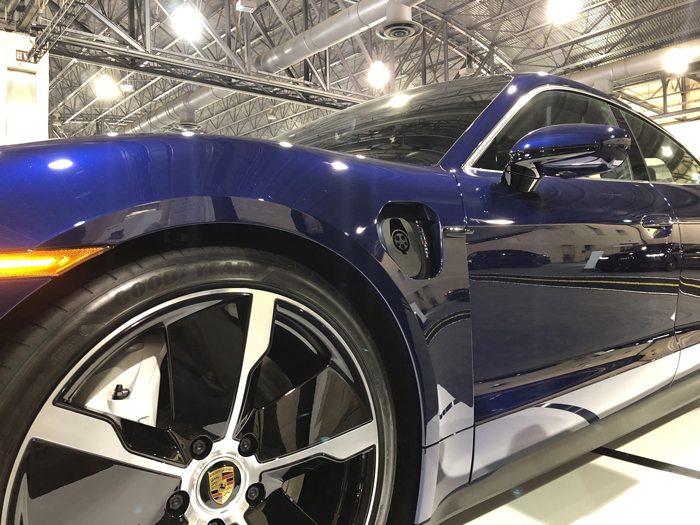 2. While Porsche’s $185K+ Taycan Turbo slugs it out with Tesla for the title of the world’s fastest production EV, the real action in the EV world is happening at the other end of the market. Thanks to maturing technologies and growing sales, automakers have begun to roll out increasingly attractive, capable, and affordable electrics for the rest of us. (Credit: Anwyn Goldberg—yes, she’s my daughter!)

Next, we took a look at Audi’s new e-tron, which replaces its earlier plug-in hybrid offering that went by the same name (Fig. 3). The luxury crossover vehicle sports a 95.3-kWh battery and a 355-hp motor that can exceed 400 hp in boost mode. Coupled through its all-wheel drivetrain, the e-tron can run a bit more than 200 miles between charges. But you won’t have to spend $75,000-$85,000 for an electric Audi much longer. The spokesperson at the booth said that the company is investing heavily in electric technologies and intends to offer an electrified version of every model it offers by 2025. 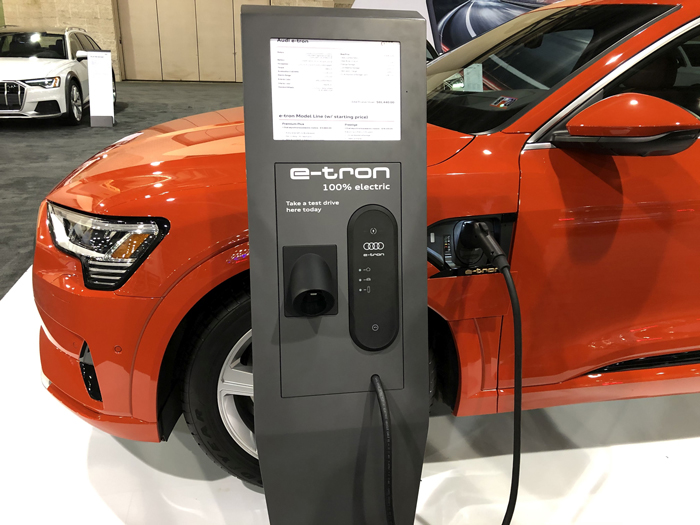 As we continued our tour, it became apparent that that many other manufacturers have similar strategies.

Electrics for the Rest of Us

While the Porsche, Audi, and other pricey electric asphalt-burners were fun to look at, the important developments were to be found at the less-glamorous exhibits, where the more practical, affordable cars that most of us drive were on display. Chevy, Ford, Nissan, and most of the other majors we visited offered a purpose-built EV or an EV/PHEV option for one or two of its existing models. However, it was clear that they will remain a distinct minority in the herd for 2020.

But appearances can be deceiving…

A closer look at the exhibits revealed several important signs that EVs may be approaching an inflection point, similar to the one solar industry reached in 2008. Back then, the slowly declining price of solar panels got low enough to trigger a demand/price cycle that quickly drove their cost to below $1/W. Steep drops in panel prices also drove down the cost of inverters, racking, and other PV system components, further accelerating their widespread adoption.

While it’s tough to say exactly when EVs will hit a similar point on the hockey-stick curve, a few trends and patterns we saw indicate it will happen relatively soon: 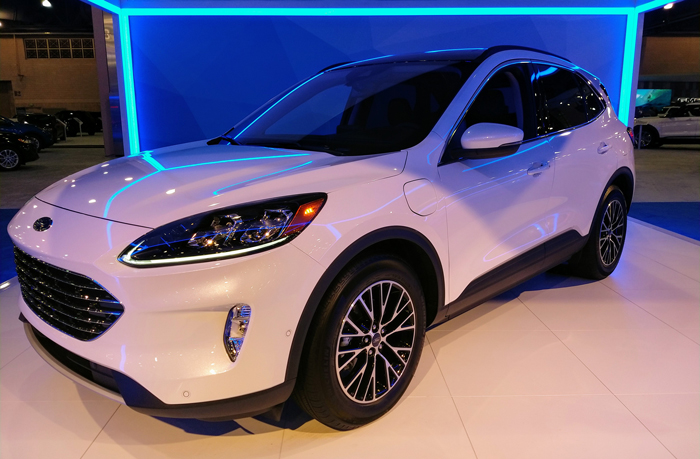 What we found on the show floor and in the Bloomberg report indicates that, for the short term, the cost of batteries will be the dominant factor in bringing EV prices into line with ICE vehicles, and in turn, how quickly they gain market share. That said, advances in materials, motor technologies, electronics, and manufacturing are also driving EV evolution and will exert a growing influence over the next few years.

During this time, semiconductor manufacturers, and the EEs who use their products, will earn their pay addressing new technical challenges. Discussions with electronics manufacturers, including with STMicroelectronics, Texas Instruments, TE, Pre-Switch, and MagnaChip, provided a sampling of the issues they expect to be dealing with over the next decade:

Comments? Questions? Suggestions for topics you’d like to know about? Write me at lgoldberg@green-electronics.com