Eliminating Porosity in Die-Cast Parts Could Cut Weight in EVs

According to Automotive News and a study by Boston Consulting Group, electrified vehicle sales (mild hybrid, full hybrid, plug-in hybrid and full battery-electric vehicles) are expected to surpass internal-combustion-engine (ICE) vehicle sales by 2030, taking 51% of the market, with battery-electric vehicle (BEV) and plug-in hybrid electric vehicle (PHEV) categories accounting for 25% of total vehicle sales. However, 82% of cars will still contain an ICE powertrain, with PHEVs, HEVs and mild hybrids all using internal combustion engines alongside their electric powertrain.

Automotive manufacturers are under pressure from many sides. On the consumer side, there is a sharp drop in confidence in diesel due to the introduction of clean air zones, some of which are already in force, and a ban on ICE vehicles in the UK by 2035. Meanwhile, governments around the world are tightening up on automotive emission legislation. In Europe, there are increasingly stringent CO2 emission regulations. In China, efficiency is paramount, and the country’s ever-stricter Corporate Average Fuel Consumption (CAFC) and New-Energy Vehicle (NEV) regulations are demanding it.

There’s no doubt that significant advances have already been made in hybrid and BEV manufacturing. However, although these vehicles present a greener alternative when they’re being driven, it’s increasingly important that the engineering and manufacturing processes behind them are also environmentally sustainable.

Vacuum impregnation seals leak paths and porosity in metal castings, sintered metal parts, and electrical components—crucial for complex cooling systems that need to be pressure and fluid tight in hybrid and BEV vehicles.Ultraseal

Vacuum Impregnation in the Auto Industry

Vehicle weight affects battery use, and the lighter the better. So companies building hybrids and BEVs are exploring ways to reduce overall vehicle weight. Using structural die-cast components can help, especially if manufacturers substitute heavier materials, such as steel, with lighter ones like aluminum. By manufacturing drive and powertrain components, such as electric motors, from die cast aluminum, car makers can further reduce vehicle weight. In turn, battery range can be extended for BEVs and HEVs while reducing vehicle emissions for the latter as well.

However, porosity has long been an issue with die-cast components. Microscopic holes form within a part’s body during the casting process, meaning the part may not be functionally sound and have leak paths.

In applications with requirements to be pressure- or fluid-tight—for example, in the complex cooling systems within hybrid and BEV drive system castings—this can be an especially critical issue. The move toward using increasingly thinner-walled castings for powertrain components to reduce component weight also brings with it an increased risk of porosity. This makes the role of vacuum impregnation even more vital to avoid scrapping complex and high value components, whether for hybrid, ICE, or BEV powertrains.

Vacuum impregnation gives an OEM-approved method for sealing leak paths and porosity in metal castings, sintered metal parts and electrical components. Using specialist impregnation equipment, voids are filled with a liquid sealant under vacuum, which is then turned into a chemically and thermally resistant polymer by heating in a hot cure process. When it comes to hybrid and BEV manufacturing, vacuum impregnation can be used to effectively seal die cast and electronic parts against leakage or fluid ingress.

As well as improving the reliability of components, the process reduces scrappage and lowers defect rates, in turn reducing waste and costs from the manufacturing process. 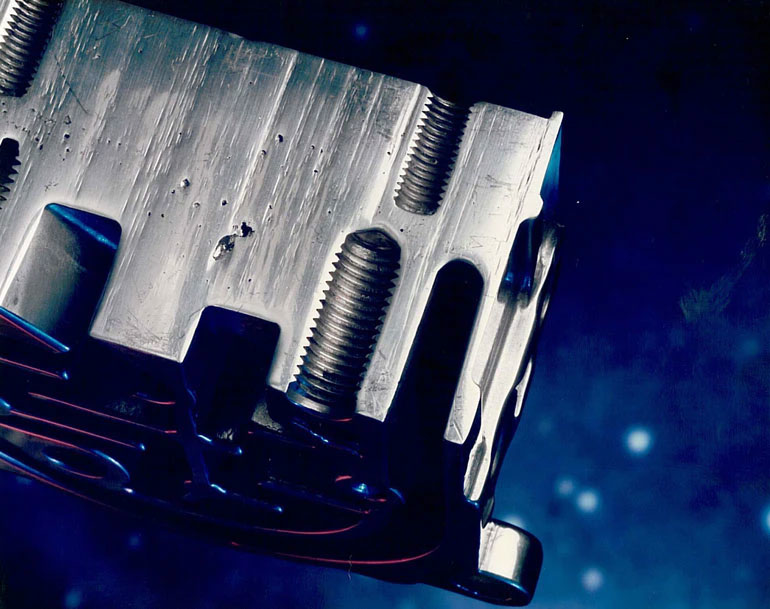 Porosity is a recognized issue with die cast components. Microscopic holes created within a part during casting may leave the part nonfunctional due to leaks.Ultraseal

With modern supply chains under increased economic pressure, treating porosity has become even more important. Scrapping fully machined parts is expensive, especially given the work invested in them. However, if a machined part fails after it has been incorporated into a component such as an automotive compressor, the costs associated with scrapping it at that stage are significantly higher.

To meet this need, Ultraseal offers a range of equipment that can be incorporated into any production line, as well as both managed in-house and off-site impregnation services. Modern front-loading impregnation systems give speed, control and significant health and safety advantages to users, as well as a smaller footprint and the lowest cost of ownership.

To help maximize uptime and reduce the overall cost of ownership, Ultraseal’s team can remotely monitor the performance and operating history of the equipment, helping to optimize processes and minimize unplanned downtime. Finally, those who don’t have the need or space for a dedicated impregnation process in-house can tap into the company’s global network of sites, which can manage the process from start to finish. Alternately, they can opt for a fully managed on-site service which provides a cost-effective, end-to-end, impregnation process management solution without investment in capital equipment or personnel. 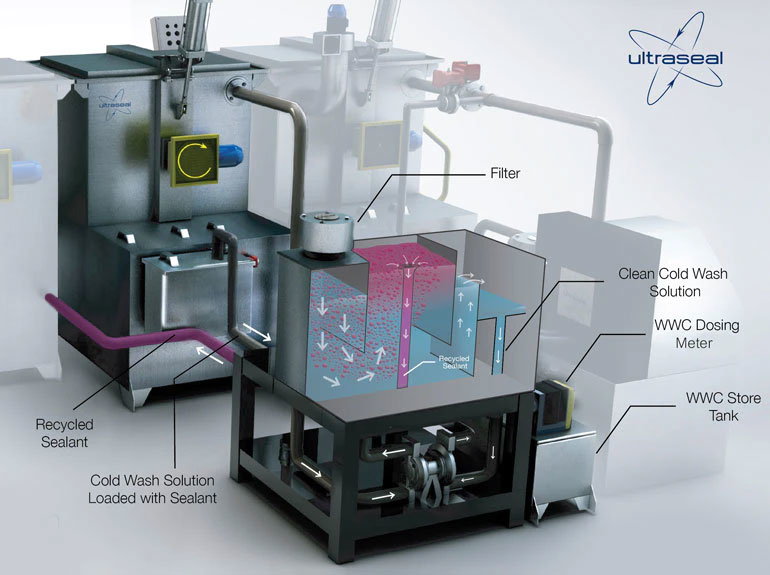 Impregnation sealants can be sent through a sealant recovery system, such as this one from Ultraseal, to retrieve and reuse them.Ultraseal

In a traditional impregnation process, components are placed into an autoclave, where the component is immersed in sealant and a vacuum is used to draw the sealant into micro-porosities and leak paths. A cold wash module then removes excess sealant and a hot cure cycle exposes components to heat which polymerizes the sealant, changing it from a liquid state to solid polymer.

During the cold wash part of this process, up to 98% of the sealant used goes down the drain as waste. To overcome this wastage and meet increasingly stringent environmental guidelines, Ultraseal offers a range of recyclable sealants. Instead of being washed down the drain, the sealant is collected from the wash tank and passed through a sealant recovery system for retrieval and reuse. In addition to significantly reducing sealant consumption, the process uses substantially less water and removes the need to change wash-water tanks, leading to a marked reduction in downtime while improving process efficiency.

Where customers have an incumbent supplier or have already invested in an impregnation solution, Ultraseal can convert existing systems to use Ultraseal’s recycling sealants. This helps to meet environmental regulations and reduce wastage without the need for capital expenditure on completely new systems.

As the automotive manufacturing market evolves, established vehicle manufacturers are investing significantly in the electrification of their product ranges to future-proof their business and stay relevant in the marketplace. Incorporating vacuum impregnation into manufacturing processes can help the automotive industry to reduce scrap and material wastage, improve component life cycles and improve environmental performance.