Eco-preneurs Use Renewable Energy to Rebuild Our Planet’s Reefs

Can technology help reverse the loss of coral reefs occurring across the planet? Initial trials of a system for restoring coral reefs show that it’s possible and practical to use renewable energy to draw minerals from the ocean itself to create structures that become homes for reef-building organisms. The accelerated process, developed by CCell Renewables, a marine engineering company, has demonstrated the ability to create healthy, living reefs at an accelerated rate in 500 small-scale trials conducted throughout the world.

CCell is taking major step toward the company’s goal to apply its process on a global scale with an upcoming project in Mexico. Rather than simply restore parts of a damaged reef, the project, slated to begin this year, will use locally generated renewable energy to create an entirely new 200-meter-long reef. To meet the project’s unique power requirements, CCell has teamed with Vicor, a company that produces high-performance power modules, to provide the power-conversion elements that will drive the reef-building process.

To Build a Reef

CCell’s reef-building system (originally developed by BioRock Technology) uses the electrolysis of seawater to extract calcium carbonate (limestone) and deposit it on large steel frames that function as anodes and cathodes (electrodes), and serve as forms that give the new reef its early structure. Thanks to careful control of the power being applied, the process grows rock at approximately 2.5 cm (1 in.) per year.

At that pace, it takes only five years to build the substrate, rather than the hundreds of years it would take to form naturally. Once the substrate is formed, divers attach broken or farmed corals to the structure, where they can grow 2X to 3X faster than they would on natural reefs. This method of reef creation has already been applied to solving a wide variety of marine and coastal problems, including coral reef and fishery habitat restoration, shoreline protection, and erosion control measures.

A reef-building project consists of a steel structure that provided the backbone for the limestone reef substrate, a power source (typically wave generators or solar panels), and a power-management system.

As researchers refined the system, they learned that in order to optimize the formation of a solid limestone substrate, it must be grown at a specific rate, without impurities and with a strong molecular structure. It’s a process that requires driving the electrolysis process with a precisely regulated current. This posed a significant challenge to CCell, since it had committed to use carbon-free, renewable energy sources whenever possible.

Those sources, such as solar, wind, and wave power generation, tend to have highly variable outputs that if unmanaged, would impact the efficiency of their electrolysis process. To solve this, CCell teamed with Vicor to create a power-distribution network that could use the widely varying outputs to produce the highly regulated power needed to achieve optimal limestone growth.

Faced with requirement to control the voltage potential between the electrodes within a narrow “goldilocks zone” of 1.2 to 4 V to drive a precisely calculated current through seawater, Vicor recommended its Factorized Power Architecture (FPA). FPA breaks up, or “factorizes,” the dc-dc function into two modules—a separate pre-regulator module (PRM) buck-boost regulator that feeds a well-controlled intermediate bus voltage to one or more point-of-load conversion devices.

In this case, the network feeds a voltage-transformation module (VTM) current multiplier, a fixed-ratio (non-regulating) resonant converter with high current density. Working in a tightly integrated manner, the PRM tightly regulates the voltage required for the reef and the VTM handles the downconversion and current delivery to the electrodes. 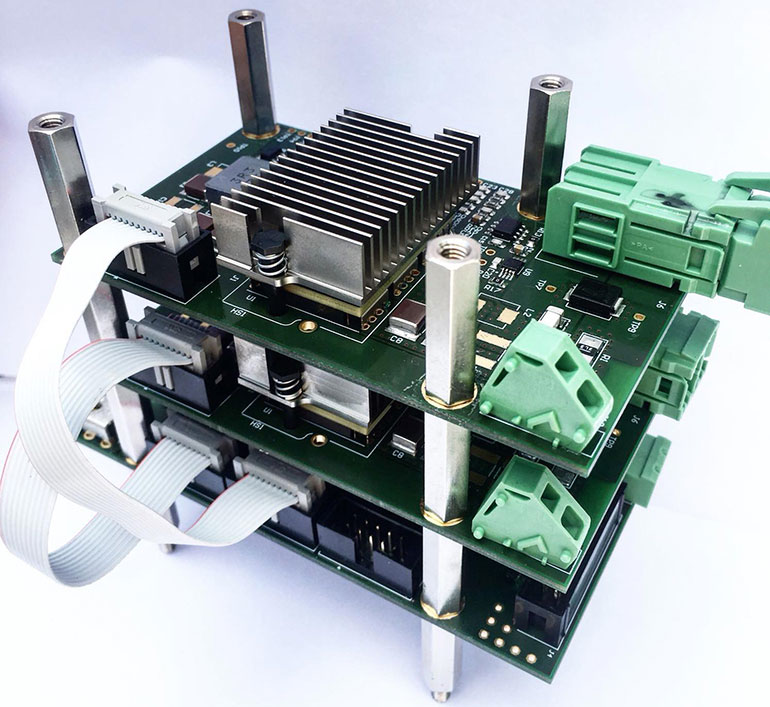 The Smart Power Management (SPM) module developed by Vicor continually optimizes its power output, controlling the distribution of power across the reef and matching supply with demand to grow strong limestone rock at maximum rates at all times.

Now that its technology has been proven, CCell plans to use it to provide economical, sustainable coastline protection and restoration services for areas suffering from the effects of storm damage, as well as longer-term problems such as increased erosion due to sea-level rise and other climate-change-related effects. Building/rebuilding reefs is more cost-effective than conventional methods for protecting coastlines (i.e., seawalls, revetments, and dykes), which are expensive, have a limited lifespan, use lots of concrete, and rarely look good. In contrast, coral reefs are a natural and sustainable solution, which are known to reduce wave heights by 84% on average.