Start-stop functionality is expected to be featured in more and more new car models from most manufacturers. However, this presents a challenge in automotive electronics design because starting the motor in cold weather can make the battery’s voltage drop as low as 3 V. This is called a “cold crank.”

The power stage for most 12 V automotive systems consists of a single buck converter that typically regulates the output voltage to 5 V or 3.3 V. Even if the regulator starts working in low-dropout mode, most circuits can be affected by a dip in the input voltage and may stop functioning.

This article discusses why a pre-boost can be the best solution to such a problem, using a typical 5-V, 5- to 15-W power supply as an example.

In this scenario, the goal is to keep the output voltage of the power stage at a constant level regardless of the input voltage, while keeping in mind that cold crank only affects the system for a very small proportion of the total working time. This means that a good solution must have minimal impact on cost, efficiency, and electromagnetic interference (EMI).

The beauty of this design is that it takes the input filter inductor and the polarity protection diode, which are typically already used in an automotive application, and utilizes them for the boost converter. This helps save cost in terms of extra components and board space, while keeping the same efficiency and EMI performance as if the pre-booster weren’t used.

Figure 2 shows a typical buck-converter circuit. In this circuit, the D1 diode protects the system from a reverse-polarity battery connection. C1, C2, and L1 form a π (pi) filter for conducted EMI. C3 is the damping capacitor between the filter and the converter. C4, C5, L2, and the buck IC form the buck converter itself.

2. This is a simplified automotive buck converter.

The pre-boost can be implemented easily by rearranging some components,and adding an asynchronous boost converter and a protection diode (Fig. 3).

3. Shown is a simplified automotive buck converter with a pre-boost.

In this configuration, D1 serves as the asynchronous rectifier in the boost converter, and L1 is the boost inductor. C1 and C2 are its input and output capacitors, respectively, while C3 acts as a buffer to hold the voltage for a brief time while the boost starts working in the event of a cold crank. D2 is added to protect the boost IC from a reverse-polarity battery connection—it doesn’t affect efficiency as it only conducts during cold crank. Polarity protection and filtering capability are also maintained.

The MPQ3426 developed by MPS is a 45-V, 6-A, AEC-Q100-qualified asynchronous boost converter that can operate from an input voltage as low as 3.2 V. Its 3- × 4-mm QFN package and minimal external component requirements help ease pre-boost implementation while minimizing the impact on cost and performance.

The MPQ3426’s VIN pin is the bias supply for the internal circuitry and should be connected to the buck converter’s output rail. This reduces the losses in the internal LDO, makes the boost IC’s bias supply independent of the system input voltage, and extends the pre-boost operating voltage range to 45 V.

On the other hand, since the system always starts with a battery voltage of about 12 V, the buck converter turns on and powers the pre-boost, ensuring the input voltage is always higher than 3.2 V and increasing its output-power capability during cold crank. The lowest transient voltage that the pre-boost can regulate is only limited by the boost IC’s switch current. 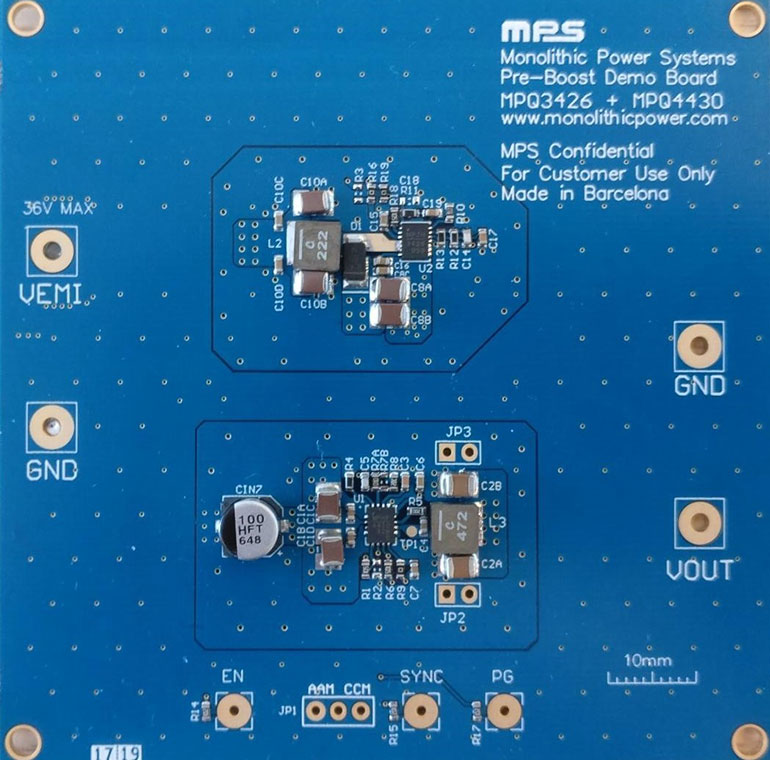 4. This a Monolithic Power Systems pre-boost demo board.

When designing a pre-boost, special attention must be paid to selecting the inductor and diode. During a cold-crank transient, the input voltage is very low, but the output power remains the same. Therefore, the inductor needs a saturation current high enough whereby the pre-boost can have good performance during the transient. This saturation current should be greater than the peak inductor current (IPEAK) during cold crank. IPEAK is determined by the maximum input current during cold crank (ILDC) and by the inductor ripple current (ΔIL), calculated using equations 1-3, respectively:

For this application, a 2.2-µH inductor with a saturation current of 9.2 A has been selected.

5. Here’s a typical voltage profile for the cold crank test showing a normal and a severe cold-crank profile.

Automotive applications can have different requirements about the cold-crank voltage profile (Fig. 5). The output-power capability of the pre-boost will depend greatly on the minimum voltage level achieved during cold crank as, with lower input voltages, the peak inductor current can be high. The table compares the maximum output current that the system can supply, versus the lowest voltage during cold crank.

To test the board’s response to a cold-crank event, there are homologated automotive voltage-transient generators that come with the voltage profile already programmed. It can also easily be tested with a programmable power supply, which are common in most electronics laboratories. Figure 6 shows a waveform that details the beginning of a cold-crank voltage transient in Channel 1, the output voltage of the pre-boost in Channel 2, and the output voltage of the system in Channel 3. 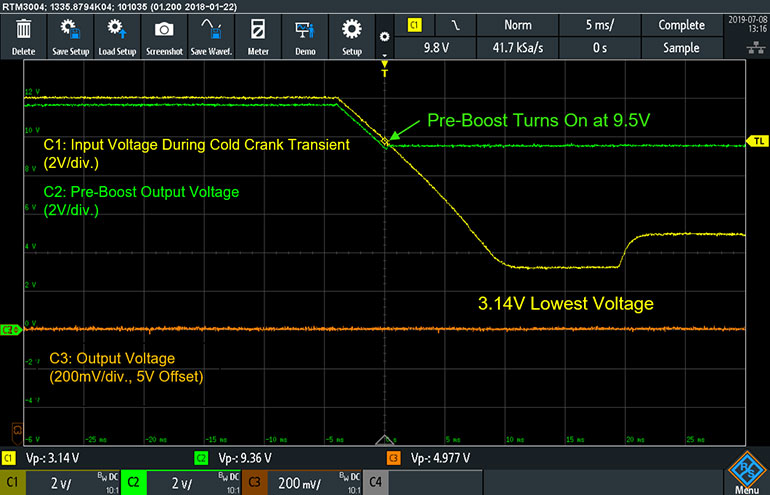 The waveform in Channel 3 shows that the output voltage remains constant at 5 V without any impact from the cold crank, which takes the input voltage to about 3.2 V. Channel 2 shows how the pre-boost quickly reacts to the voltage transient, and regulates the output voltage to 9.5 V. This demonstrates that a pre-boost is an excellent solution for automotive systems that require continuous operation during transient voltages.

In higher-power applications, the pre-boost can be implemented using a boost controller such as the MPQ3910A, which drives an external transistor and maintains a higher current capability. Implementing a pre-boost solves cold-crank design challenges, saving more cost and space than the few alternatives that exist. This allows for a seamlessly smooth start-stop feature, enhancing the end users’ experience.

Figure 5: “LV 124 & LV 148 Electrical normative basics and practical challenges for vehicle components and systems,” Markus Fuhrer, 05/04/2016. Note that some elements have been changed from the original source.

Francesc Estragués is an Applications Engineer at Monolithic Power Systems.