One challenge in all of these systems is creating the very high current and short-term (microseconds) LED camera flash waveforms, which can be spread out over long periods of time, such as 100 ms to over 1 second. Creating short, square LED flash waveforms separated by long periods of time is nontrivial. Drive currents for the LEDs (or strings of LEDs) rising above 1 A and LED on-times shrinking to microseconds increases the challenge. Many LED drivers with high-speed pulse-width-modulation (PWM) capabilities may not efficiently handle long off-times and high currents for short amounts of time without degradation of the square-type waveform needed for proper high-speed image processing.

To be able to provide machine-vision camera flash for up to 2-A LED strings, even with long off-times measured in days, requires special handling. Specifically, after sampling the state of the output and control-loop capacitors, the LED driver needs to continue to trickle-charge these components during long off-times to compensate for typical leakage currents. This allows the system to maintain the desired flash shape and integrity. Such an approach also scales up within drivers that are used in parallel for increased LED flash current.

Figure 1 shows how easy it is to parallel two drivers for a 3-A camera flash—designs up to 4 A are possible. This example employs the LT3932 high-speed LED driver from Analog Devices, which maintains the output capacitor and control-loop charge state, even during long off-times.

LED flash requirements for machine-vision systems are far more demanding than what a standard PWM dimming driver can meet. That is, most high-end LED drivers are designed to produce PWM dimming brightness control at a PWM frequency of at least 100 Hz. This is because lower frequencies can be perceived by the human eye as an annoying flicker or strobing, even if the LED waveforms are square and repeatable.

At 100 Hz, the theoretical maximum off-time is about 10 ms. During the 10-ms off-time, if designed correctly, an LED driver loses minimal output capacitor charge, allowing it to start its control loop in approximately the same state in which it ended the last PWM ON pulse. A quick response and ramp-up of the inductor current and the next LED PWM ON pulse can be quick and repeatable, with minimized startup time. Longer off-times (for frequencies below 100 Hz) risk output capacitor charge loss due to leakage, preventing a quick response when the LED is turned back on.

LED drivers act as current sources, regulating the current sent out through the light-emitting diodes. Since current only flows in a single direction to the output, multiple LED drivers can be placed in parallel and their currents sum through the load. Current sources don’t need to be protected against current running backward through one converter or having mismatched outputs. Voltage regulators, on the other hand, aren’t inherently good at current sharing. If they’re all trying to regulate the output voltage to a single point, and slight differences exist in their feedback networks, a regulator may draw reverse current.

An LED driver maintains its output current, regardless of other drivers that may supply additional current summed at the output load. This makes paralleling LED drivers quite simple. For example, the LED flash system of two parallel LED drivers shown in Figure 1 efficiently drives four LEDs at 3 A with short 10-µs pulses spread out by long periods of time—defined by the machine-vision system. Each converter sources half of the total string current during PWM on-time and turns off and saves its output state during PWM off-times. The off-time can be short or long, with no effect on the flash waveform repeatability.

Each converter disconnects its PWM MOSFET from the shared load and keeps its output capacitor charged to approximately the last voltage state by sourcing current to that capacitor as it leaks energy. Any leakage experienced by these capacitors over long off-times is overcome by the small amount of maintenance current. When the next PWM ON pulse starts, the PWM MOSFETs of each converter are turned on and the output capacitors start up in approximately the same state as the last pulse, regardless of whether 10 ms or a full day has passed. 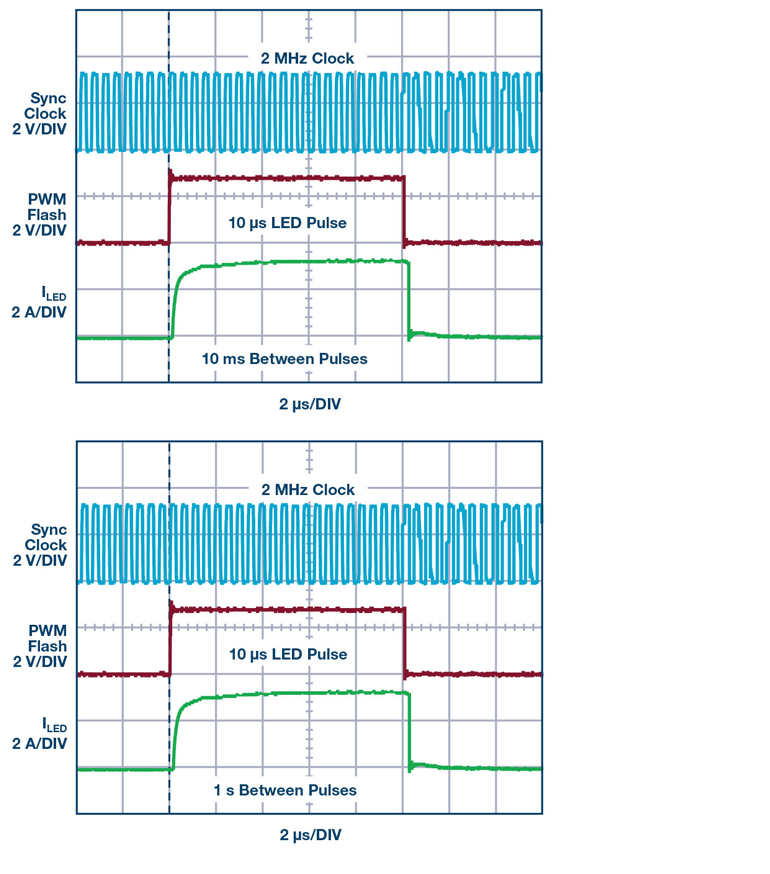 Even Higher Current Is Possible

Parallel LED drivers aren’t limited to two converters. Three or more converters can be paralleled to create even higher current waveforms with sharp edges. Since this system doesn’t have a master or slave device, all of the converters source the same amount of current and share the load equally.

It’s recommended that all of the parallel LED driver converters share the same synchronized clock and remain in-phase. This ensures that all converters have approximately the same phasing on the ripple of their output capacitors so that ripple currents don’t flow backward or between the different converters.

It’s important for the PWM pulse waveform to remain in-phase with the 2-MHz synchronization clock. This will ensure that the LED flash waveform remains square and without jitter, producing the best image-processing results (Fig. 3).

3. An example of machine vision on an industrial conveyor belt. Inspection systems move at many different speeds, yet the flash technology must be fast and crisp.

The LT3932 demonstration circuit (DC2286A) is designed to drive 1 A of LED current through one or two LEDs as a step-down LED driver. It can easily be altered and paralleled, as shown in Figure 1, for higher current, higher voltage, or parallel operation.

Figure 4 demonstrates how two of these circuits are easily connected together to drive 10-µs, 3-A pulses through four LEDs from a 24–V input. For testing purposes, a pulse generator can be used for the synchronized clock signal (Fig. 4, again). In a production machine-vision system, a clock chip can be used to generate the synchronized sync and PWM pulses. For higher–current pulses, add more demonstration circuit DC2286A converters using the same parallel scheme. 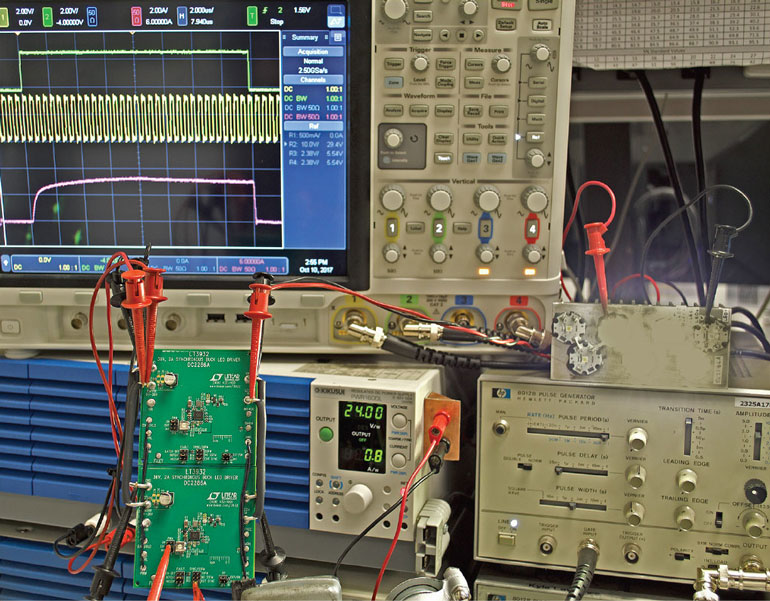 4. Two DC2286A LT3932 demo circuits are easily connected in parallel to create the 3- to 4-A machine-vision LED flash application shown in Figure 1.

Machine-vision systems can use parallel LED drivers to create the fast, square, high-current waveforms required for automated image processing. They can also be extended to higher currents by connecting parallel converters—3-A and higher pulses on the order of microseconds are possible with these converters, even with long off-times. LED camera flash waveforms remain square and without jitter, no matter how long the off-time between LED flashes.

Keith Szolusha is an LED Driver Applications Manager and Kyle Lawrence is an Associate Applications Engineer at Analog Devices.