It only takes a short stroll through any modern manufacturing facility to see the incredible level of technology that surrounds us. The use of robots to manufacture, process and package goods is just one example that shows the boundaries of machine design are still a long way off.

And then there are conveyors.

These sometimes-overlooked, occasionally forgotten pieces of equipment are often added in the final stages of projects—that’s the fate of conveyors. Moving product in…and taking product out. A simple role for an unpretentious cog, forever cast in a supporting role.

If you take a second stroll through those state-of-the-art facilities, take a closer look at the conveyors; you might just be surprised at exactly what they’re doing. They’re taking parts and finished products from one place and performing highly detailed operations before delivering it to another. Conveyors have evolved to become critical “intelligent” players in packaging, assembly and automation systems both large and small.

A side-by-side comparison shows how far conveyors have advanced going from the 1970s-style conveyor (left) to a modern-day platform (right).

How exactly did conveyors get relegated to afterthought status? The answer is rooted in its decades-old designs for merely moving products from one point to another.

“Too many people think they’re just dumb conveyors; no need to pay attention to them,” says John R. Henry, of Changeover.com and author of The Packaging Machinery Handbook. “And honestly, some conveyors are just pieces of machinery put together with aluminum angles, just dreadful homemade-looking stuff.”

He says many people just see conveyors as simple machines consisting only of a frame, belt, and motor. Conveyors historically have performed well for the tasks asked of them, and because of that, their designs haven’t changed much through the years.

“But the reality is conveyors really need to be thought of as critical pieces of equipment,” Henry says. “They can do so much more than they’re given credit for.” 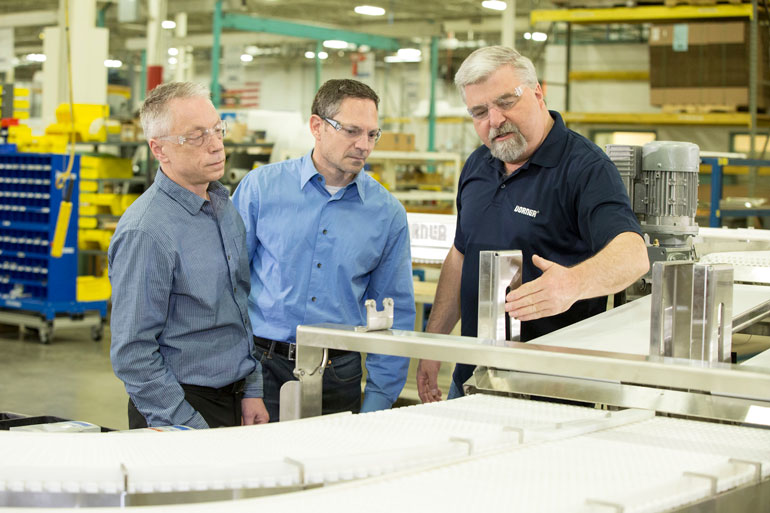 To understand all the capabilities of modern conveyors is an ongoing educational process.

Several years ago, Henry participated in a roundtable discussion about conveyors in which one panelist commented, “Conveyors have become intelligent bridges between islands of automation.” That observation struck a chord with him.

“Conveyors are the bridge between a filler and a capper, or a capper and a labeler, or a labeler and a cartoner,” Henry notes. “And, if you don’t have a good bridge and movement over that bridge isn’t smooth and properly controlled, it interrupts the flow.”

“Just as machinery and equipment is becoming more advanced, so too must conveyors, otherwise they’ll be left behind,” says John Kuhnz, vice president of engineered solutions at Dorner. “Modern manufacturing and packaging subsystems today are extremely complex, and the supporting conveyors are being asked to do so much more than their predecessors. With sleek, low profile designs; faster, accurate performance; and small footprints to fit into tight spaces, today’s conveyors contribute greatly to improving the performance and efficiency of the entire system.” 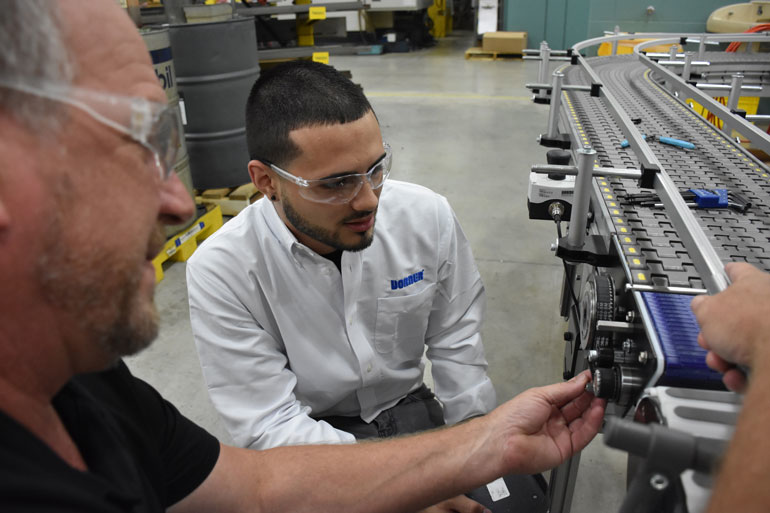 A key component in many conveyors is the drive belt.

The Power of Conveying

Although some of the dominant global conveyor manufacturers have been early adopters in embracing the full potential of conveyors, companies of all sizes are now taking a closer look at how they, too, can better design conveyors to improve assembly and processing entire lines.

The manufacturing environment inside plants is much different than what it was just a generation ago. Automation is now a prime driver in how the way products are made. Many applications include manual and robotic tasks, and conveyors need to be engineered to meet these challenges. That’s why there are so many different types of conveyors:

Pallet conveyors are ideal for many automation-focused applications that require exact positioning of parts, as they can be set up or programmed to start and stop at specific locations to sync up with robots working at other processes. These conveyors dominate in automotive component manufacturing, as well as medical devices, electrical and electronics, and product testing/inspection that need automated and manual assembly or handling of products.

Pallet conveyors typically come on three different platforms to move pallets: dual belts powered by a common drive, flexible plastic chain belts, or a linear motor. Pallets can be stopped, raised off the belts and rotated 90 or 180 deg. to reposition items as necessary. Companies using pallet conveyors also do so for the accuracy. They need items at exact locations, and these conveyor’s deliver repeatability of 0.0020 in. and strong holding forces for manual and automated assembly. Pallets can be square, rectangular or octagonal, making tight turns and traveling in elevators save floor space. 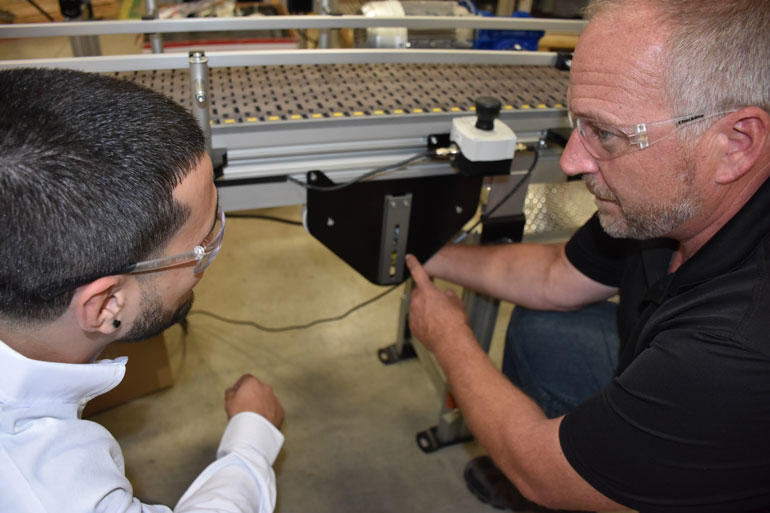 A seasoned engineer points out the accessories that were added to this Pointing out accessories on a plastic chain conveyor.

Flexible chain conveyors can move items in and around equipment and machinery through tight turns in tight spaces, as well as on long runs. They can also lift or lower items to accommodate elevation changes. This makes it easy to reroute items and send them to new or legacy machinery—and manufacturing demands change.

Z-frame conveyors take items up and over, or down and under, obstacles on the factory floor. They have one or two pivot points that let them be adjusted to have different slopes. These conveyors are commonly used in food manufacturing (sanitary environments) industries and positioned under a hopper to receive product, which then gets moved to a higher elevation for further processing.

Roller ball conveyors have belts that can merge, divert and align packages as they move. They use low- and high-friction angled rollers within the belt to smoothly guide and align items of all sizes. This conveyor adds flexibility by handling several product sizes on a single belt. Additionally, the conveyor minimizes floor space, increases reliability, eliminates costly controls and makes the work environment safer.

Precision timing belt conveyors ensure items are at the right place at the right time, a common requirement for automated plants. To synchronize location and time, these conveyors use servo motors that provide indexing repeatability of ± .040 in., all at a rate of 100 indexes per minute. This level of precision is critical, especially for robotic applications.

“Robots are becoming smaller and faster, which make them easier to use with conveyors in automation, food handling and processing, medical, pharmaceutical, life sciences and other industries,” Kuhnz says. “Robots are widely accepted by these industries because of their clean room processing capabilities. New advancements in robots let them operate cleaner and more efficiently, which complements clean room standards.”

He described a recent application in which 22 conveyors were teamed with 13 vision-guided robots to pick and place coins for packaging. The conveyors were a mix of servo-driven timing belt models, which indexed respective coins to their proper downstream locations. The robots and conveyors helped identify, orient and package coins using cameras and other inspection devices before the finished package was transferred downstream.

Accessories are efficient and cost-effective ways to add capabilities to conveyors. For example, shaft encoders mounted to the conveyor’s drive shaft can monitor and count pulley revolutions and control the belt’s speed for feeding or indexing applications. Diverters and gates manage the product’s continuous flow on and across the conveyor. Controlled by proximity switches, photo eyes or counters, they guide and change product direction to one or more locations. In addition, diverters and gates can meter flow to specific areas or separate products based on attributes.

Depending on the product and required stroke length, overhead pushers on the conveyor’s side remove items flowing perpendicularly from the conveyor. Servo drives accurately stop the conveyor to provide precise part location. They also help control acceleration and deceleration and assist in assembly.

Conveyors have certainly grown up and evolved from their early predecessors. Conveyors today are dynamic and greatly contribute to the efficiency of packaging and assembly lines. But to do that, you need a good understanding of exactly what conveyors bring to the equation. In many cases, future designers get that understanding in college. 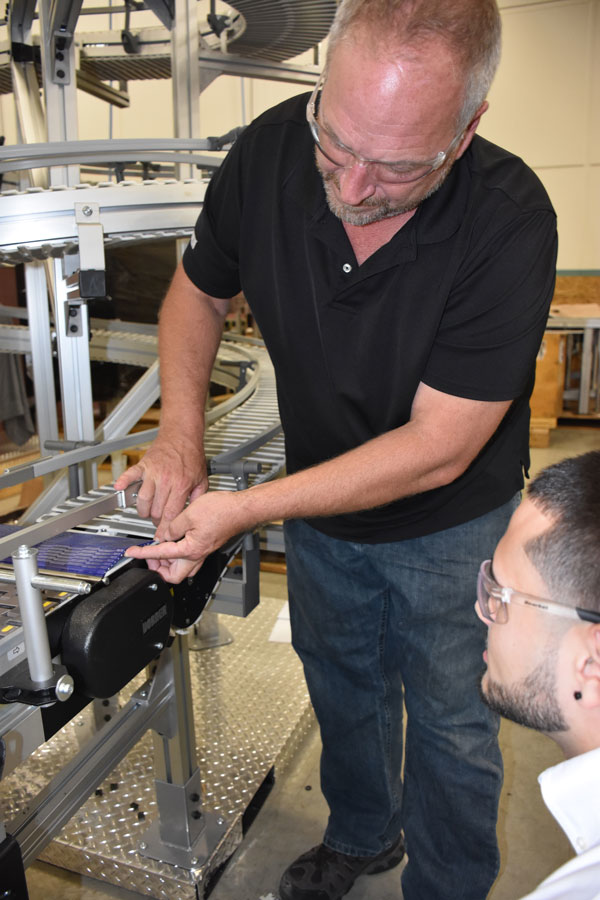 An engineer shows a trainee how the transfer point on a plastic chain conveyor works.

A Re-education in Conveyors

The push to have conveyors seen in a different light is taking shape in colleges and universities, where students are getting new exposure to them in their packaging studies.

Kevin Lipsky, a packaging machinery lecturer at the University of Wisconsin-Stout, echoes Henry’s comments that his incoming students don’t realize the role conveyors play because they’re not on their radar.

“In general, most students don’t realize or forget about conveying and moving package materials from one process to another,” Lipsky says. “I think it’s because they lack production experience. If they saw and heard more about the intricacies tied to moving things from one process to another, they would have a better appreciation and feel for them.”

UW-Stout’s Bachelor of Science degree in packaging aims to prepare students for technical or management responsibilities in the packaging industry. The degree program emphasizes the application of theory to strengthen problem-solving abilities. Lipsky says the program also focuses on hands-on engineering skills for improving processes and developing packaging materials.

Lipsky has some smaller conveyors in his classroom for students to work on and gain an understanding of their role in manufacturing.

“It’s vital for students to handle conveyors and see what capabilities they bring in moving product and syncing up with various inspection equipment,” Lipsky explains. “Support from the industry is important; donations of well-designed conveyors are always welcomed as a way to invest in the future workforce. If you can put a tool in the students’ hands, they have fun with it and come up with creative idea and innovations.”

UW-Stout is just one of a growing number of higher-education institutions offering packaging-related degree programs. According to the Association of Packaging and Processing Technologies (PMMI), a trade organization for the packaging and processing industry, 63 colleges and universities offer packaging degree programs.

Lipsky says the job outlook for his students is promising, as many graduate with job offers in hand.

“There are a lot of career growth opportunities in packaging,” Lipsky points out. “We have to convince young people, as well as their parents, that factories aren’t just dark places with lousy jobs; they are places to make good livings with opportunities to advance.”

“Some people insist technical degrees are somehow beneath typical liberal arts degrees that don’t really teach anything specific,” Henry adds. “But here are many students coming out of two-year programs with job offers that make my jaw drop.”

Matt Jones is the vice president of sales & aftermarket at Dorner. He can be reached at Matt.Jones@dorner.com.