The phrase “digital twins” has been around for some time, but its definition and iterations of its execution tend to shift in lockstep with technological innovation. That’s certainly the case in the context of Bentley System’s focus on infrastructure and its solutions for the digital representation of physical assets.

According to Anne-Marie Walters, industry marketing director, Oil and Gas and Manufacturing, Bentley Systems, a digital twin brings the physical and virtual worlds together not only by including the data, but also through all of the process capabilities as changes in operations, workflows and engineering are updated in real-time.

Walters provided an industry update on digitalization in the oil, gas, process manufacturing and mining sectors during Bentley’s Year in Infrastructure 2020 virtual conference (Oct. 19-21). She noted that PlantSight, a cloud-based solution can be a key factor in bringing digital twins to fruition, as it visualizes assets, performs analysis, generates insights, and predicts and optimizes performance of the asset or plant.

Bentley Systems, whose initial public offering was listed on NASDAQ under the ticker symbol BSY on September 23 and is renowned for its lifecycle software solutions for industrial assets, touts a digital twin approach that ensures data remains evergreen in support multi-disciplinary users across the lifecycle.

PlantSight, for example, synchronizes siloed data using international standards and open source architecture, Walters explained. The software is characterized as a federated data solution and is a collaboration between Bentley (providing engineering-design-construction knowledge) and Siemens (providing operations and maintenance expertise).

In making the transition to a digitalized plant and constructing digital twins of physical assets, an understanding of the underlying foundation of the engineering information is fundamental, asserted Sandra DiMatteo, director, Solution Marketing, Asset and Network Performance, Bentley Systems. “The need to keep that [information] evergreen is really coming to light,” said DiMatteo. “You can’t make accurate decisions or have confidence in your workforce and their abilities if you don’t have trusted information.”

In tandem with the development of digital twins, DiMatteo pointed out that using artificial intelligence and machine learning has over the past five years been “put in its proper place in solving specific business problems,” and will continue to be a significant trend in the coming years. 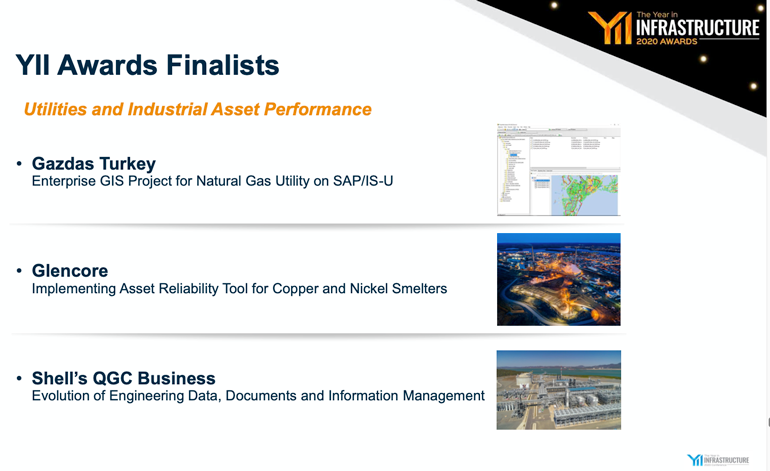 Walters noted that “highly volatile prices and pressure on available capital in the oil gas, power and mining and process industries” have come are under pressure to cut capital costs and deliver a quicker return to investors. The impact has been the demand for quicker projects.

This scenario, she noted, was already materializing before COVID-19 hit this year, and was exacerbated by the impact of the pandemic. “Digitalization was already at the top of everyone’s agenda,” said Walters. “With the pandemic we have seen this trend accelerating with everyone, not just large companies.”

Walters also stated that both large and small companies are turning to digitalization to transform their businesses. The drive towards reducing carbon footprints started the move towards more remote working, and Walters observed that companies that were well set up to work digitally have found they’ve “hardly missed a beat when everyone was sent home to work from their home offices.”

Technologies that enable personnel to work collaboratively with each other and their supply chain have enabled them to make decisions faster and continue to operate, noted Walters. Despite the significant drop in oil price, Bentley Systems has not seen a drop in the usage of automatic information management solutions, or project collaboration tools across industries.

“We’ve seen an acceleration in the move to the cloud with new deployments in China, Canada, Australia and South Africa, West Coast USA, Malaysia, Singapore, India and the UK,” she explained. “And we’ve seen a greater adoption of our visualization solutions with asset owners in the North Sea and Gulf of Mexico, Brisbane and Perth, Singapore, Japan, Jakarta and South Korea.”

The company has seen greater engagement in establishing standards and methods for working across the entire lifecycle. “Open standards initiatives in the industry is booming at the moment,” Walters said. “So, now, more than ever, owners are adopting the approach of thinking big, proving small and scaling quickly.” 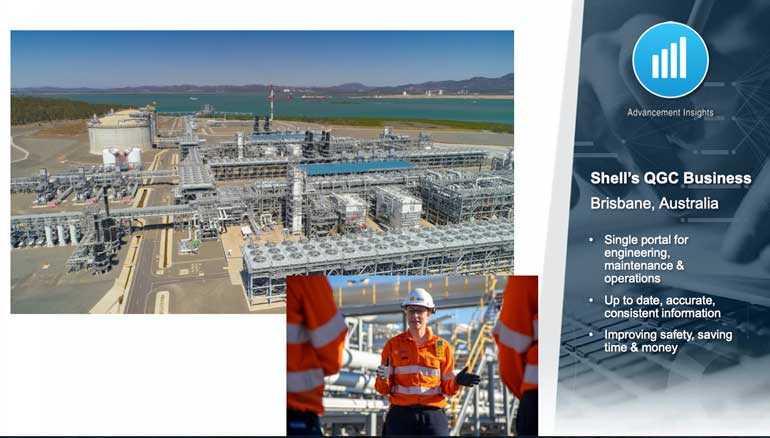 Shell’s QGC Business was named the winner in the Utilities and Industrial Asset Performance category at the YII20 Awards ceremony.

The Year in Infrastructure Awards honors extraordinary infrastructure projects that have leveraged digital advancement and achieved exceptional results. To this end, Walters referenced two use cases that were advanced to this year’s finalists in the Utilities and Industrial Asset Performance category.

The second use case involved Glencore, which implemented an asset reliability tool for copper and nickel smelters in the Canadian cities of Rouyn-Noranda, Quebec and Sudbury, Ontario. Looking for ways to improve asset reliability at its metal production facilities, Glencore turned to applications from Bentley System’s playbook (AssetWise Asset Reliability).

The natural resources company previously implemented a risk-based maintenance approach using Bentley AssetWise APM at their copper-producing Horne smelter and wanted to extend the solution to their nickel smelter in Sudbury. Bentley System’s cloud solution was used to bring IT maintenance online. Glencore reported the implementation resulted in increased copper production by 35,000 tons per year, and that they saved CAD$ 180,000 annually with automated work orders that require four times less rework and planning.