On Sept. 30, the Toyota Research Institute (TRI) gave media professionals a look into its labs in Los Altos, Calif. and Cambridge, Mass. Shelter-in-place orders caused TRI to think outside the box for the open house, resulting in the shipment of virtual reality (VR) headsets to attendees.

TRI’s focus is on home-based robots—robots that can assist when needed, but not interfere with crucial human fulfillment and interaction—mainly for elderly individuals, for whom maintaining independence is a major concern. TRI approached this task with a Japanese concept in mind. Studies of Ikigai, which translates to “reason for being,” teaches us that people feel most fulfilled when they do work they love and that helps society.

Gill Pratt, CEO of TRI and chief scientist for Toyota Motor Corporation, explained that Toyota is working on a type of robot automation that amplifies human ability, not replace it.

“This is Toyota’s historical philosophy of Jidoka, an idea that takes the concept of artificial intelligence (or AI) and turns it around to become what is known as intelligence amplification (or IA),” said Pratt.

Steffi Paepcke, a TRI user experience team lead, explained how they studied the human in-home experience (also known as the “genchi genbutsu” [go see for yourself] method) to determine the parameters within which in-home robots should operate. Her team did not simply ask what people wanted, but sought a deeper understanding of the challenges faced by older adults to better formulate the solution.

“If the inventors of the automobile had asked people riding horses what they wanted, they would have answered that they just wanted a faster horse,” said Paepcke. “It can be difficult to imagine a future that’s vastly different from the status quo.”

“Sharing meals and feeding loved ones can serve as a focal point for social connection,” she said. “As cooking gets more difficult, not only do some people lose a beloved hobby, but their social contact might decrease as well.”

Finding a balance between automation and sensible helpfulness can make a world of difference, though no one solution can guarantee that balance is achieved in every household.

TRI is also investigating how machine learning can be used for environment manipulation, something that is very difficult for robots to do in an unstructured and complex environment such as a home. Robots could even learn from each other, as well as from a human using virtual reality.

“That brings us to the next stage of machine learning, which we think of as fleet learning,” said Max Bajracharya, VP of robotics at TRI. “When one machine learns something, they all learn something. If we design things in the right way, this can create explosive growth of capability as the number of machines gets larger.”

Bajracharya said there are two key challenges for fleet learning: teaching robots from human behavior and using simulation to both train and validate robot behaviors.

In its Los Altos headquarters, a TRI research team led by Jeremy Ma and Dan Helmick work in a mock home for robotics testing. The team can rearrange floor layouts and move objects to develop robot capabilities before testing them in a real home. The mock home features a kitchen, dining area, bathroom and living space similar to those found in an actual home. 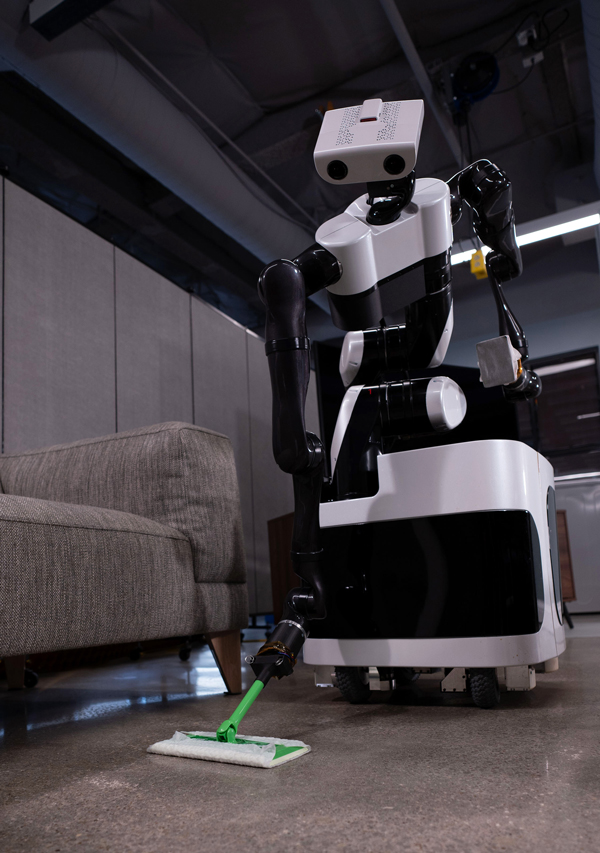 Currently, the robots’ tasks are centered around cleaning, one of the main tasks these robots would probably perform in the home.

While homes obviously aren’t built for robots now, it puts more of a burden on thoughtful robot design. For homes of the future, however, the design could literally be flipped on its head. In Japan, the team observed that homes are smaller, which could present a challenge for robots traveling across the floor. The team is experimenting with a robot with the ability to traverse a home from the ceiling.

Like the floor-based robot, these are also taught to perform tasks by a person in virtual reality, Both robots also moved slower to accommodate safe operation around humans and pets. 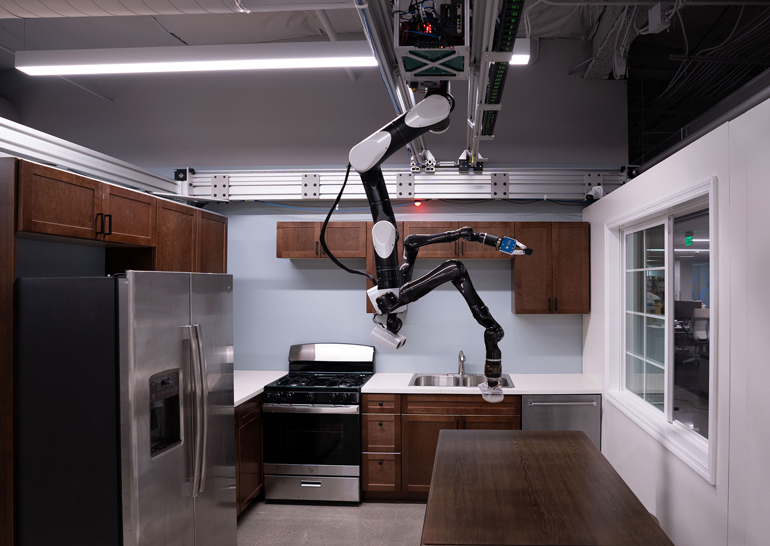 An innovation TRI is testing at the Cambridge facility is TRI’s new bubble soft gripper. To address the need for soft contact as robots interact with indoor environments, TRI researchers developed these grippers to have high-density tactile sensing capability.

“The soft grippers are made of a soft bubble that complies when it is in contact with objects or tools, and we can control that compliance by changing the pressure in the bubble,” said Russ Tedrake, vice president of Robotics Research at TRI. A camera inside the bubble senses the depth and tracks motion to estimate the shear forces on the surface. 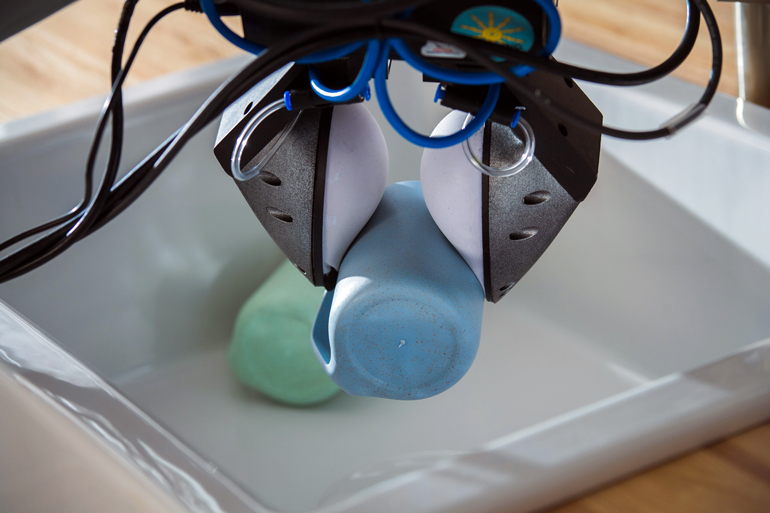 “We work closely with our partner organizations at Toyota and the Woven Group to take the capabilities we develop and turn them into product concepts that can be deployed and evaluated to assist aging populations around the world,” Bajracharya noted.