For almost a half-century, the development of Ethernet has moved inexorably in one direction—faster. When Robert Metcalfe co-invented it with his team at Xerox Palo Alto in the 1970s, Ethernet had an initial speed of 2.94 megabits/second over coaxial cable. In 1980, the original 10 Mbit/s standard was published with an additional option: twisted pair copper cables. Fast Ethernet (100Mbit/s) debuted in 1995, followed by Gigabit Ethernet in 1998.

Today Industrial Ethernet has reached 400 Gbit/s, and true terabit speeds—exceeding 1000Gbit/s­—are pending. So, it might seem counterintuitive that the next big thing, Single Pair Ethernet (SPE), is notable not for being faster still, but for being fast enough. SPE profiles as a game-changer: a well-worn cliché that actually might be apropos in this case. Creating a full-fledged Industrial Internet of Things (IIoT) manufacturing environment requires installing hundreds (if not thousands) of small sensors, actuators, vision systems, switches and controls at field level—the industrial edge.

Single Pair Ethernet connectors for industry have a standardized (IEC63171-6) two-pole mating face design based on the Harting T1 Industrial. The socket has a three-dimensional profile on a PCB less than half that of an RJ45.Harting Technology Group

These smart devices, most of which have low power and bandwidth requirements, are essential for generating the constant stream of operational data needed to realize the enormous potential of Industry 4.0/IIoT, like flexible manufacturing, process optimization, further automation, better quality products made with less energy, predictive maintenance and enhanced safety.

SPE will offer the fastest, simplest and most cost-effective solution to bring these smart devices online and establish real-time Ethernet communications from the sensor all the way to the cloud under one unified SPE protocol.

So, what exactly is Single Pair Ethernet? It’s readily scalable, physical layer networking technology that uses a single pair of twisted copper wire—rather than two or four pairs of conventional Ethernet—to deliver speeds fast enough to bring IIoT to the edge: 10Mbit/s (10BASE-T1) up to 1,000 meters. 100Mbit/s (100BASE-T1) and 1Gbit/s (1000BASE-T1) up to 40 meters with shielded cable or 15 meters with unshielded cable. That single pair can also deliver DC power simultaneously with data using the Power over Data Lines (PoDL) standard IEEE 802.3bu-2016, which defines 10 power classes from 0.5W to 50W. 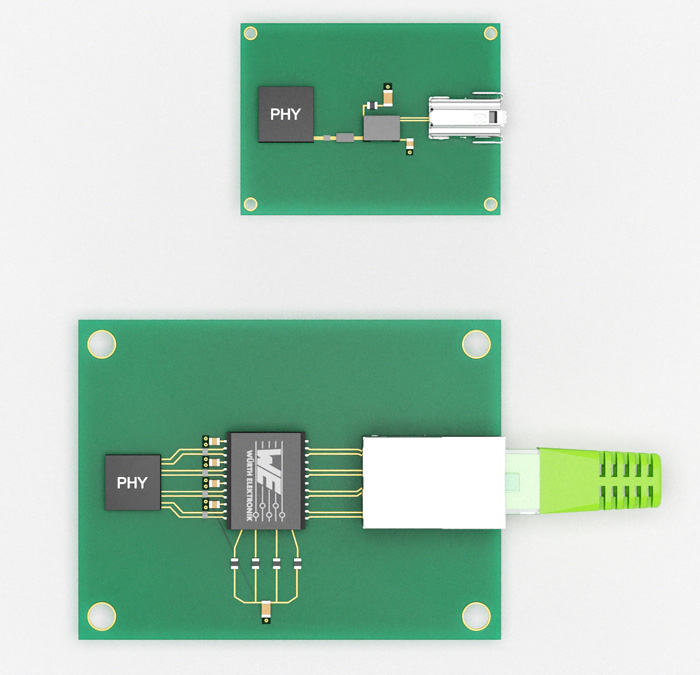 With SPE, the number of passive components on a PCB is considerably reduced. Together with the compact connector, the SPE layout (top) can save up to 75% PCB space, compared to current Ethernet over RJ45, allowing for miniaturization of the supported device.Wurth Elektronic Group

With two wires, SPE cabling is lighter and thinner—up to 75% smaller and less than half the weight of comparable four-pair Ethernet cabling. It’s also cheaper. The first IP20 connector on the market—Harting’s T1 Industrial—has a two-pole mating face measuring just 3.1 mm × 6.1 mm and a three-dimensional socket profile on a printed circuit board that’s less than half that of an RJ45. So, PCBs can be significantly smaller. That, in turn, will keep devices as small as possible, as will PoDL, which eliminates the need for a battery on board or separate power source.

Traditional fieldbus protocols for field-level communications present a potential chokepoint in digitalizing the industrial edge. They are hard-pressed to accommodate so many new nodes and lack SPE’s speed and bandwidth (up to 600 MHz). Moreover, they can’t exchange data with Ethernet protocols—and thus with management, enterprise and other higher-level systems—without gateways or protocol translators, which add complexity and cost. (Conventional Ethernet is too bulky and expensive for connecting most IIoT edge devices, save for those with high power and bandwidth requirements that only four-pair cabling can provide.) 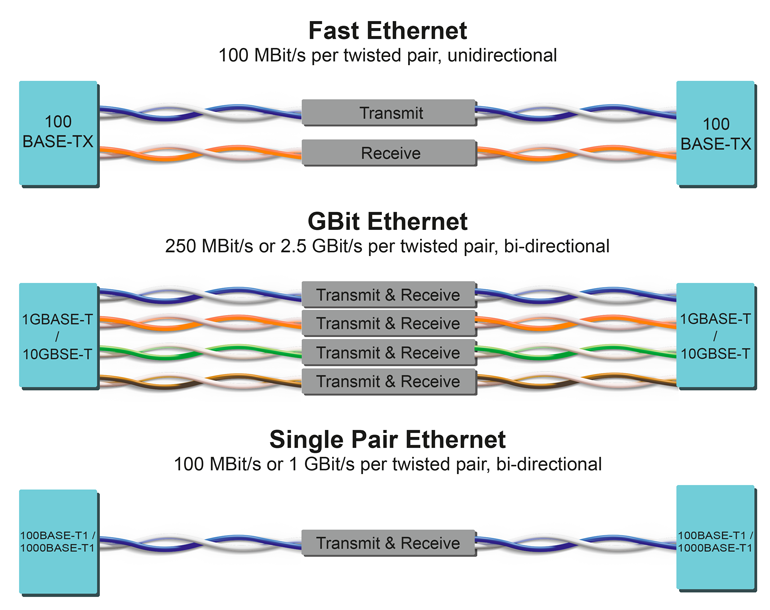 Single Pair Ethernet provides comparable transmission speeds to current Fast and Gbit Ethernet up to 40 metres and current standards. For 10 Mbit/s, SPE is certified up to 1,000 meters.Harting Technology Group

Makes Maximum Use of Available Space

Think of how much cabling is required in a new plant or major rebuild to network those many IIoT devices. SPE’s thin cabling will take up the least space in walls, floors or conduits, making for the simplest installation process at the lowest installed cost. SPE connectors can also be terminated onto already deployed two-wire fieldbus cabling for easy, affordable transitioning where complete makeovers aren’t possible.

And with the advent of Time Sensitive Networking Technology, Industrial Ethernet now provides very reliable and deterministic communication. SPE is based on standard TCP/IP protocols, so users can employ network diagnostic and monitoring profiles such as HTTP (hypertext transfer protocol), SNMP (simple network management protocol) or LLDP (link layer discovery protocol) to diagnose or troubleshoot devices and components anywhere on the network.

That said, SPE is definitely not a substitute for conventional Ethernet, but complementary to it. Each will have its own role in IIoT and industry in general. The development of SPE began almost a decade ago with the automotive industry’s desire to reduce the cable weight of new vehicles. Unshielded SPE cabling can generate a 30% reduction in vehicle cable weight from CAN bus harnesses. In robotics, SPE cabling can withstand more bending and torsion cycles than thicker cabling for a longer service life.

Single Pair Ethernet’s tremendous potential has galvanized both the factory and process automation worlds into action. In process applications, protocols like Foundation Fieldbus H1 are relatively slow—notable for complex commissioning and maintenance issues, special hardware and knowledge requirements, and compatibility concerns. Ethernet is well-understood. The skills and expertise to manage it are readily available, as is standard hardware, and Ethernet devices are far easier to commission. 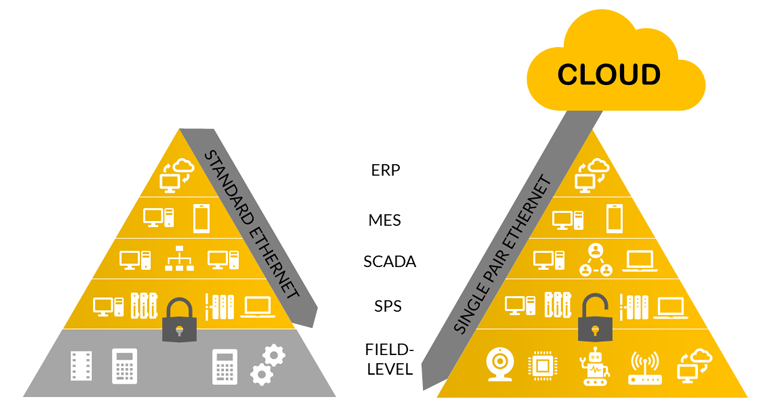 The process sector is pushing to finalize Ethernet-APL by the fourth quarter of this year. APL stands for Advanced Physical Layer. It standardizes SPE for deployment on devices in intrinsically safe and hazardous environments at 10 Mbit/s out to 1,000 meters (10BASE-T1L), or 300 times faster than Foundation Fieldbus H1. Several leading process instruments manufacturers are aiming to unveil their first Ethernet-APL products at ACHEMA 2021 next June in Frankfurt.

SPE devices for factory automation and those process applications not requiring Ethernet-APL hardening are also coming. Prototype chipsets have been available for some time, and the expected availability of production chipsets later this year will see many first-generation, SPE-enabled products reach market in the next couple of years.

Early adopters are likely to appreciate SPE’s strong investment security. SPE is generic, non-proprietary technology. Years of effort went into creating SPE standards within IEEE 802.3 and for standardizing key components such as cables and connectors. That promises to create a robust, competitive marketplace for a complete ecosystem of components and SPE-enabled devices.

The International Electrotechnical Commission has published IEC 63171-6 establishing Harting’s T1 Industrial interface as the connector standard for industrial environments (MICE2 and MICE3). This IEC 63171-6 standard, along with a connector interface for building environments (MICE1) from CommScope, have global recognition from ISO/IEC and TIA TR-42. Customers can expect connectors in familiar styles, such as M12, M8, push-pull and snap-in, and with IP20 and IP65/67 protection ratings. Customers have even inquired about the possibility of IP69K connectors.

Single Pair Ethernet is a full-fledged ecosystem of standardized transmission protocols and components, as well as the devices that will use them in a wide range of industries.Harting Technology Group

Working Together to Promote SPE

Many component manufacturers have joined groups promoting SPE, like the SPE Industrial Partner Network, which began with seven member companies in late 2019 and now has 30. Others are taking different approaches, but whatever the path, the influence of standards is helping shape SPE’s rapid acceptance.

Is there a plausible alternative to SPE in industry? Proponents of wireless communications like 5G certainly believe so. They view it as competing with or co-existing alongside wired networks. At this juncture, 5G private networking for industry isn’t as far advanced as SPE in proof of concept and winning general stakeholder acceptance. There are public concerns about 5G’s reliability, security and safety. Several industry groups—and even the U.S. Departments of Defense, Transportation and Homeland Security—have expressed opposition to using L-band spectrum in terrestrial 5G networks for industry, concerned it may interfere with critical GPS signals.

In the meantime, Single Pair Ethernet will continue to evolve. Faster data speeds are coming. Also, the range of 100mbit/s and 1000 mbit/s SPE for industrial applications can be extended well beyond current range limits; the viability of doing so has been proven in industry testing, and that should lead to formal consideration by standards bodies before long.

Jon DeSouza is president and CEO of Harting Americas.