With each new model year, automobiles seem to incorporate more electronic equipment to make them safer, more convenient, and entertaining. Many of those electronic additions are audio-related. These days, a good automotive sound system is generally expected and even taken for granted.

Audio systems have steadily improved over the years, and continue to be integrated into more critical applications. This article looks at the current state of auto audio systems, some ways that they’re expanding and improving, and how to design them.

The simplest and minimal auto audio system available in most new cars, including even the low-end models, is the four-speaker arrangement. It consists of two speakers in front and two in the rear. They serve the AM and FM radios and any music playback options like USB streaming from a smartphone, along with the disappearing CD player, in the infotainment system. New vehicles usually include many more accessories requiring audio, such as:

With so much audio capability, automobile sound systems have turned into a major design challenge.

Two major design objectives are to minimize amplifier size and reduce the thermal load. Space behind the dashboard where the infotainment audio system resides is very limited. Therefore, new designs must be smaller despite the need to support additional speakers and other accessories.

One sure way to achieve space and thermal reduction is to exclusively use Class-D audio amplifiers. Some automobiles still use the traditional class AB linear power amplifiers that do indeed deliver excellent sound. However, their efficiency is very low. Efficiency peaks at 50% with full power. And they generate considerable heat, requiring more space for heat dissipation and large heat sinks in some cases. Class-D switching amplifiers can have efficiencies up to 90% thereby greatly reducing the thermal load.

Some engineers worry about the transition from Class-AB to Class-D audio amplifiers. Will the PCB footprint really be smaller and what EMC/EMI issues will emerge?

The solution lies in class D amplifiers that switch at much higher frequencies. A typical Class-D amplifier switching frequency is 400 kHz. At that frequency, it takes relatively large low-pass filters on the speaker outputs to smooth the pulse-width-modulated (PWM) signals into quality audio. This usually means inductors and capacitors.

Suitable inductors for audio filtering tend to be large, usually much larger than any other parts including ICs and capacitors. For 400-kHz operation, inductor values are typically 8.2 or 10 µH. Despite the use of fine wire and advanced metal-alloy cores, these inductors are large and generally dominate any PCB assembly of audio amplifiers.

By using a Class-D amplifier that switches at a higher frequency, speaker output filters can be much smaller. One type of Class-D audio amp switches at 2.1 MHz. Typical output filters are significantly reduced in size as common inductor values are 3.3 µH.

This is a big issue because even the minimal auto audio system with four speakers requires eight inductors. The amplifier outputs are in a bridge-tied load configuration that requires one inductor per output (Fig. 1).

As for the electromagnetic-interference (EMI) problem, the higher switching frequency fixes one of the most vexing problems encountered when using 400-kHz switchers. The first several harmonics of the 400-kHz signal are 800 kHz, 1200 kHz, and 1600 kHz, which fall right into the AM radio band (535 to 1710 kHz). The interference and receiver desensitization are unacceptable. Yes, many people still do listen to AM radio, mostly in their cars. The news, traffic, sports, and talk/commentary shows remain popular. The problem is solved by using 2.1-MHz Class-D amps.

Typical of the Class-D amplifiers that can fulfill the performance and features described above is Texas Instruments’ TPA6304-Q1. This four-channel 45-W device with 2.1-MHz switching capability has an efficiency of greater than 80%. THD+N is less than 0.1%. The four inputs have selectable gain, and output impedance is 4 Ω. The device meets the CISPR25-L5 EMC specification. Also, an evaluation module is available to expedite design.

Most of us don’t think of microphones as part of an automotive sound system. However, there’s usually at least one and sometimes two microphones to handle the voice-response system and the hands-free cell-phone capability. Another may be associated with the eCall system. If the vehicle uses any noise cancellation, several other microphones are involved. Multiple microphones just add extra cost to the infotainment system. 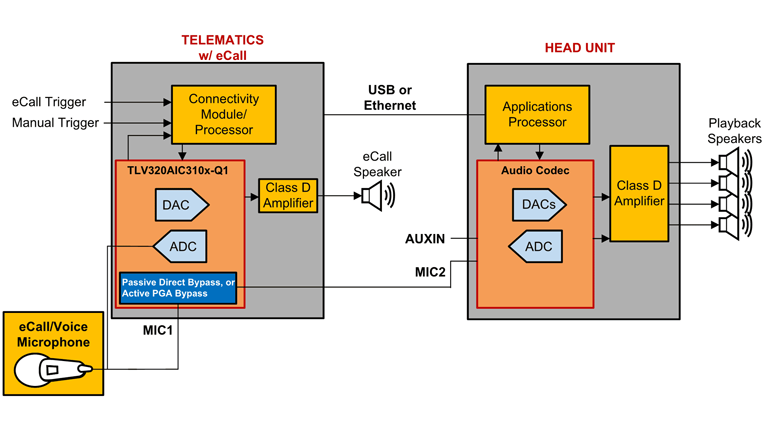 2. One microphone is shared between two different audio modules via a bypass path in the eCall module.

Figure 2 shows how one microphone can be shared between an eCall telematics module and the audio head unit of an automobile audio system. Sharing microphones between different automotive audio subsystems not only saves automakers the cost of a microphone, it eliminates the cost associated with microphone plastic enclosures, wiring, and installation.