Cryptography: Why Do We Need It?

In our day-to-day lives, the use of cryptography is everywhere. For example, we use it to securely send passwords over vast networks for online purchases. Bank servers and e-mail clients save your passwords using cryptography as well. Cryptography is used to secure all transmitted information in our IoT-connected world, to authenticate people and devices, and devices to other devices.

If all of the cryptographic engines/functions stopped working for a day, modern life as we know it would stop. Bank transactions wouldn’t go through, internet traffic would come to a halt, and cell phones would no longer function. At this point, all of our important information would be exposed, and it then could be exploited to do unimaginable harm to us all.

Cryptography is an essential way of preventing that from happening. It secures information and communications using a set of rules that allows only those intended—and no one else—to receive the information to access and process it.

In the Old Days

Classically, cryptography used ”security by obscurity” as way to keep the transmitted information secure. In those cases, the technique used was kept secret from all but a few, hence the term “obscurity.” This made the communication secure, but it was not very easy to implement on a wide scale. Classical cryptographic methods are only secure when two parties can communicate in a secure ecosystem.

In Figure 1, we show a classical cryptographic system. The sender and the receiver first agree upon a set of pre-shared encryption/decryption keys. These keys are then used sequentially to encrypt and then de-crypt each subsequent message.

One-time pad is an encryption technique that requires the use of a pre-shared key that can be used only once. The same key must be used for encryption and decryption. The term “One-Time Pad” is an artifact from having each key on a page of a pad that was used and then destroyed. Once the pre-shared keys are exhausted, the sender and the receiver need to meet in a secure location to securely exchange a new set of keys and then store them in a secure location for the duration of the next set of message exchanges.

Clearly, obsolete classical techniques are no longer viable. A vast system of electronic communication, commerce, and intellectual properties need to be secured across oceans and continents that would otherwise be intercepted by people with hostile intentions.

Next Phase of Cryptography

So, how do you implement an excellent level of security in such a massive system that can carry out billions of transactions in a short period? That’s where modern cryptography comes in. It’s an essential part of secure but accessible communication that’s critical for our everyday life.

Next, we will learn how this is achieved on a day-to-day basis all around us. We rely on publicly known algorithms for securing the massive amount of information that’s exchanged around the clock. These algorithms are standards-based and vetted in an open environment so that any vulnerabilities can be quickly found and addressed. 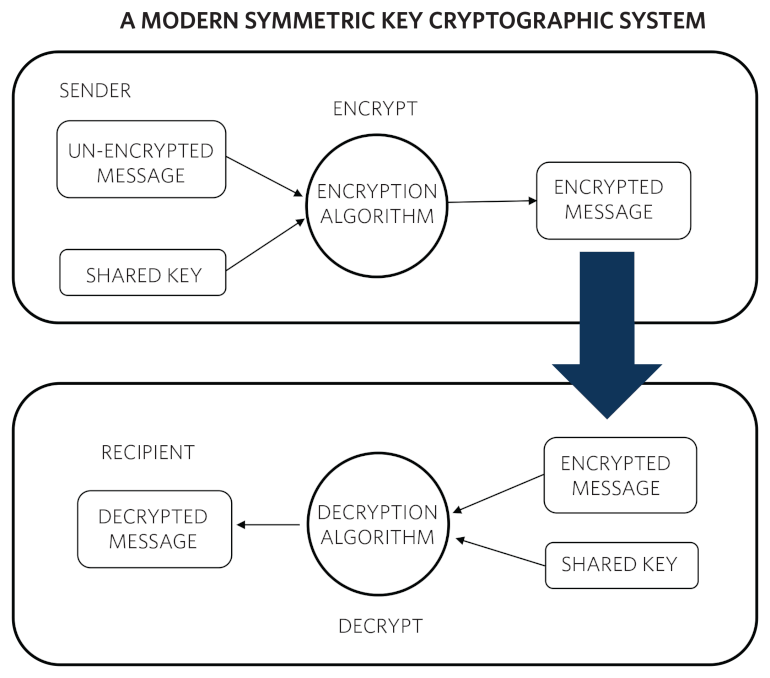 Current cryptographic systems provide all of the above or a combination of the above in various forms for an intended application. Let’s explore each of these goals a little more to get a basic idea of how they are achieved.

Confidentiality requires information to be secured from unauthorized access. This is accomplished by encrypting a sent message using a cryptographic algorithm with a key that’s only known by the sender and recipient. An interceptor might be able to obtain an encrypted message but will not be able to decipher it. 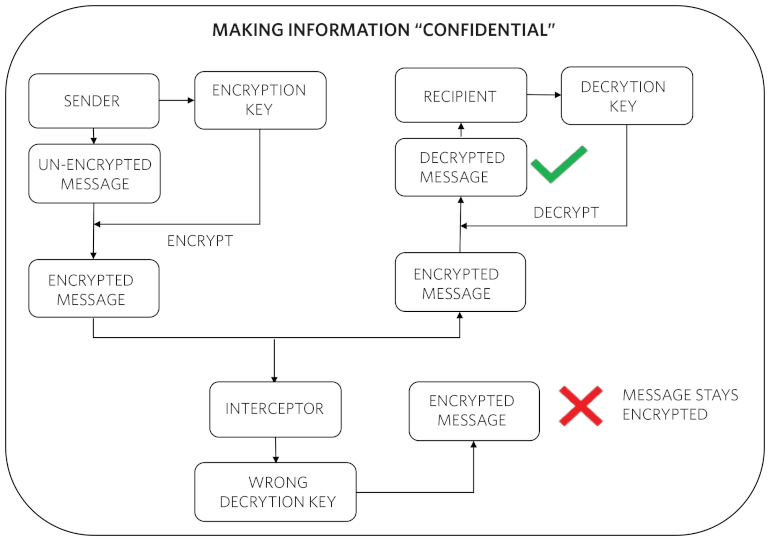 In Figure 3, we show how encryption is used. In this case, the sender and recipient have worked out a system to share the encryption/decryption key. They both use the key to encrypt/decrypt the messages they exchange between each other. If a malicious individual intercepts the message, no harm is done since that person will not have the key to decrypt the message. We’ll discuss key sharing and encryption algorithms in a later article.

The goal here is to first identify an object or a user and then authenticate them prior to initiating communication or other operations. Once the Sender has authenticated the Recipient, further communication can begin.

To learn more about the basics of authentication, check out this video:

In Figure 4, we show how authentication works in one direction. The bank (Sender) authenticates the customer’s PC (Recipient) using a simple username and password combination before letting the customer use the bank’s website. The actual process is much more complex, but we are using this simple example to illustrate the basic concepts of cryptography. Identification and authentication can also be a bidirectional process, where the Sender and Recipient both need to identify each other before starting message exchanges. We will explore all those topics in detail later. 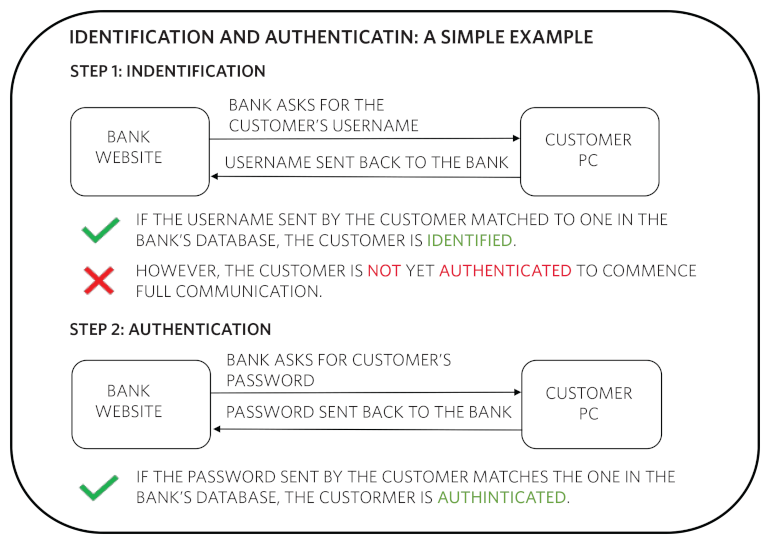 4. Identification and authentication, basic concepts of cryptography, shown in a simple example.

How do we make sure that a message sent and then received over a communication network or data link hasn’t been altered during transit? For example, there could be an attempt to intercept a message and insert a virus or malicious program to take control of the Recipient’s PC or other equipment without their knowledge. To prevent this from happening, it’s vital to ensure that any message transmitted isn’t modified. 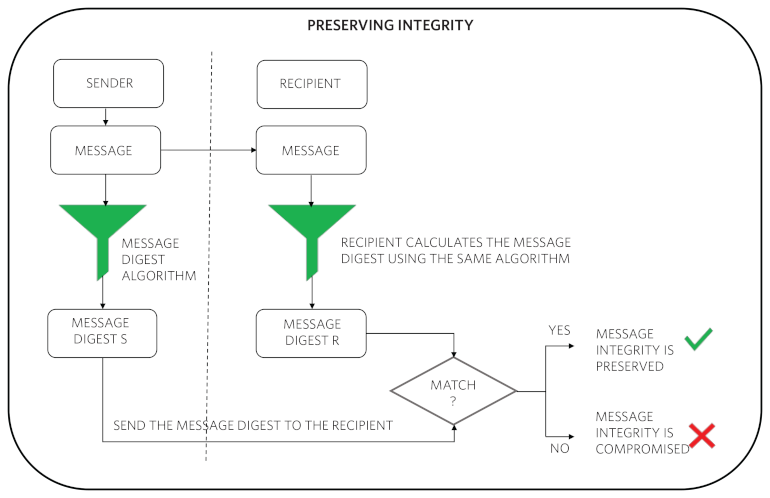 5. Using a message digest helps both a sender and recipient to preserve integrity.

In a communication system where a multitude of messages are exchanged, there’s a need to trace the incoming message back to the Sender. This is required to ensure that the Sender doesn’t deny sending the message. Very similar to a pen-and-paper legal document where we sign on the dotted line to finalize a contract, a digital signature is used to achieve similar goals in the digital domain. 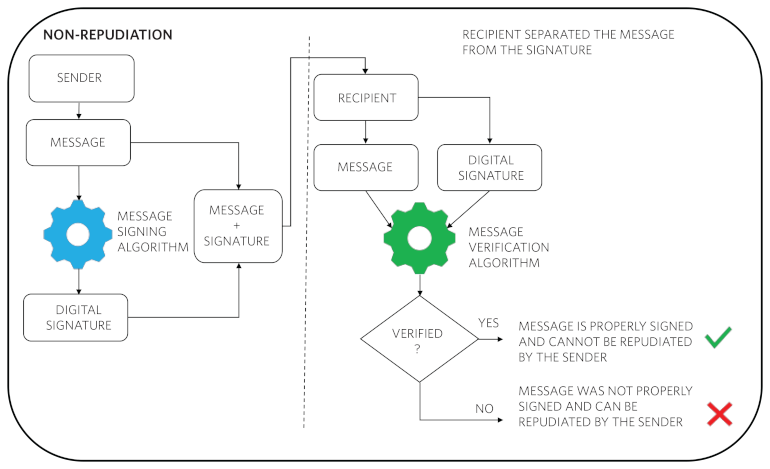