In the last two articles, we covered the basic concepts and two basic types of cryptography. In this article, we will look at specific implementation details of the most common cryptographic algorithms. It starts with the fundamental XOR function and then discusses the more complex symmetric and asymmetric algorithms in use today.

XOR (exclusive or) is a vital logical operation that’s used in various capacities in a lot, if not all, cryptographic algorithms. Figure 1 shows how this function works. Having this basic understanding is required before reviewing any of the algorithms.

1. This diagram shows how the XOR function works.

Due to XOR’s properties, one of the inputs can be used as a key for data going into the other input. For instance, if A is a single bit of an encryption key, an XOR with a data bit from B flips the bit if A is a 1. This can be reversed by bitwise XOR’ing the encrypted result with the key again.

Let’s look at an example:

Our goal is to take the word “Secret,” encrypt it with a key using XOR, then decrypt it using the same key and the XOR function. These are the steps: 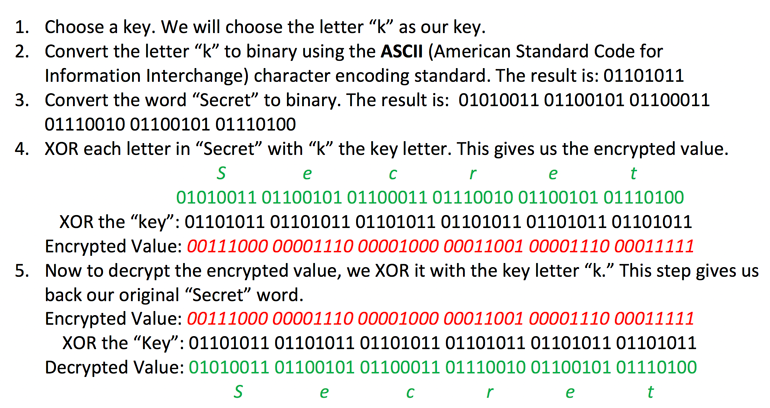 The basic idea behind a SHA function is to take data of a variable size and condense it into a fixed-size bit-string output. This concept is called hashing.

The SHA functions are a family of hashing algorithms that have been developed over time through National Institute of Standards and Technology (NIST) oversight. The latest of these is the SHA-3 function. Figure 2 shows the basic concept of secure hash generation.

The SHA function has the following characteristics:

3.     It’s a one-way function. In Figure 2, it’s impossible to use the resultant hash value to regenerate the input text, other than trying each possible input text. This becomes computationally impossible for sufficiently large inputs.

4.     If the same input message is fed to the SHA function, it will always generate the same resultant hash.

6.     A small change in the input value, even a single bit, completely changes the resultant hash value. This is called the “avalanche effect.”

If a hash function satisfies all of the above, it’s considered a strong hash function. Some of the SHA functions currently in use are SHA-1, SHA-2, and SHA-3.

Now let’s explore how SHA functions work. In this article, we’ll only review SHA-2 and SHA-3. SHA-1 is being phased out and isn’t recommended for any new designs.

How Does SHA-2 Work?

The SHA-2 function has four main types based on output bit length: 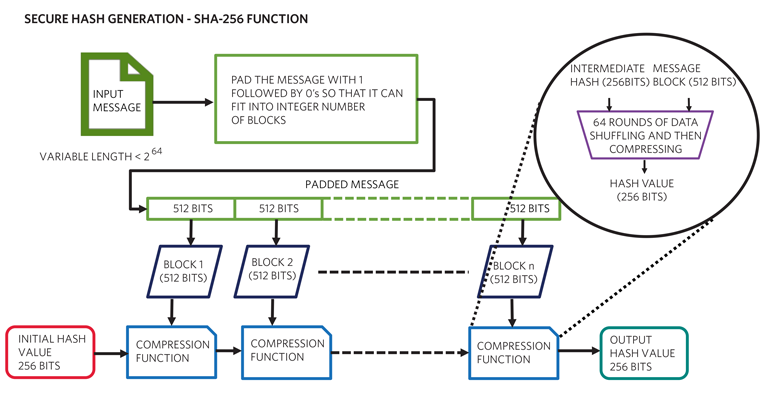 3. The SHA-256 function for secure hash generation follows this process.

The input message is first padded to make sure that it will completely fit in “n” number of 512-bit blocks. The first 512-bit block is then fed into a compression function along with an initial 256-bit hash value. The compression function essentially shuffles the message 64 times, compresses it to 256 bits, and sends it out to the next compression block or sends it out as the final hash. Thus, a variable input message gets shuffled many times to prevent it from being used to get to the original message. Once that’s done, the output hash is generated.

How Does SHA-3 Work?

The SHA-3 function has no predefined output length. The input and output lengths have no maximums either. But for comparison purposes with SHA-2, we’ll define four main types based on output bit lengths:

Let’s look at SHA3-256 as an example. SHA-3 uses a Keccak sponge function. Just like a sponge, the first step soaks in or absorbs the input message. In the next phase, the output hash is squeezed out. Figure 4 is a block diagram of a SHA3-256 function. 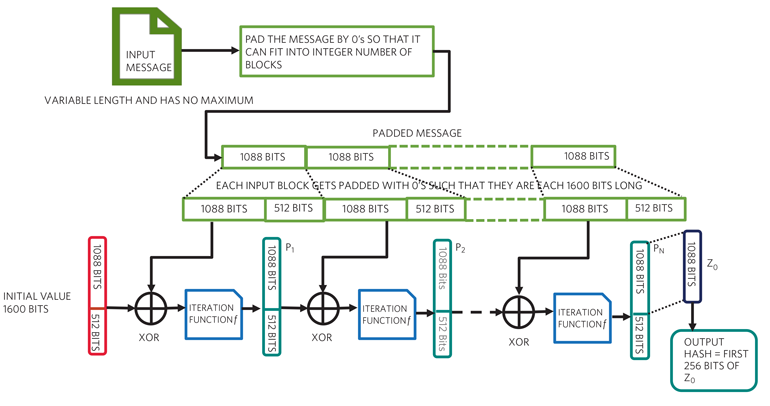 The iteration function in Figure 4 takes in the 1600 bits of data and then puts it through 24 rounds of permutation using a specific algorithm. After that, it’s passed to the next stage as a 1600-bit block. This continues until the absorbing phase has completed.

For example, if the required hash length was 2500 bits, we would have needed three more instances of the iteration function to get the desired length hash. 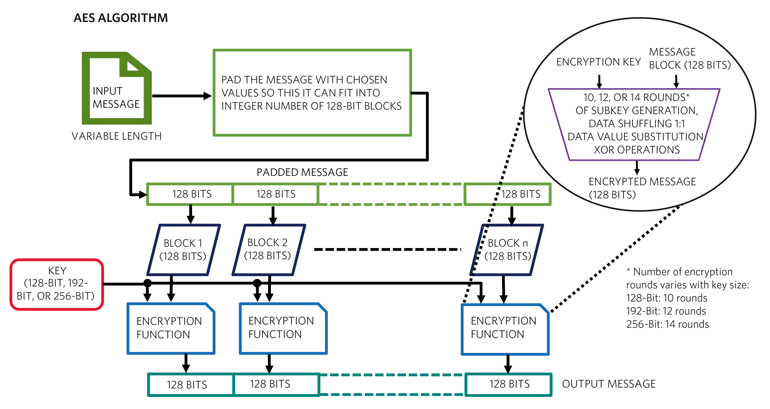 5. Here’s an overview of the AES algorithm.

The AES algorithm is a fixed-width encryption algorithm. Therefore, the input message is first padded to make sure that it will completely fit in “n” number of 128-bit blocks.

Obscuring is accomplished by shuffling data bits, taking portions of the data and substituting them with values from a lookup table (like a decoder wheel), and performing XOR operations to flip bits from 0 to 1 according to bit values in a set of “round keys” generated from the input encryption key. A round key is used one time for one of the obscuring rounds and is created by “expanding” a portion of the encryption key by copying bits and inserting the copies in between other bits.

The basic idea behind the Triple DES (or 3DES) algorithm is to scramble and substitute input data based on the value of an input key in a reversible way. The result is called ciphertext. 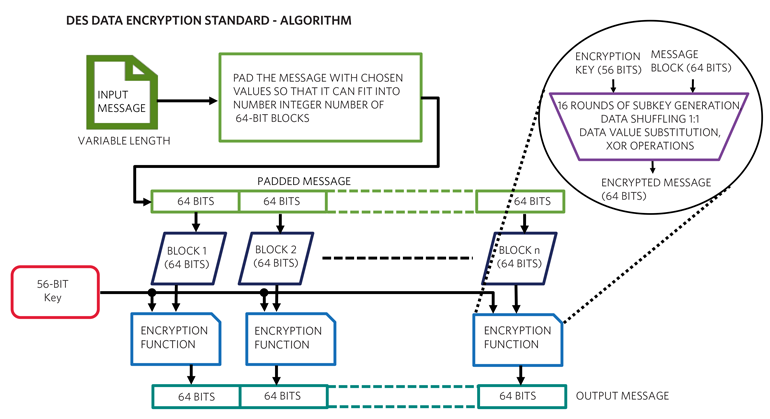 6. This chart presents an overview of the DES algorithm.

The DES algorithm is a fixed-width encryption algorithm. Therefore, the input message is first padded to make sure that it will completely fit in “n” number of 64-bit blocks.

Each 64-bit block is fed into the encryption algorithm along with a 56-bit encryption key (most versions of the algorithm take a 64-bit key, but 8 bits are ignored). The encryption function uses the input key to generate 16 “subkeys,” each used for 16 rounds of obscuring the input block bits. This obscuring is accomplished by shuffling data bits, taking portions of the data and substituting them with values from a lookup table (like a decoder wheel), and performing XOR operations to flip bits from 0 to 1 according to the values of bits in the subkeys.

How does 3DES work?

After DES was shown to be vulnerable to attacks shorter than a “brute-force attack” (cycling through every possible key value until the original message blocks are revealed), a simple method of effectively increasing the size of the encryption key was developed. Figure 7 depicts the 3DES solution.

7. Three DES operations are used to create the 3DES algorithm.

RSA, named after its creators—Ron Rivest, Adi Shamir, and Leonard Adleman—is one of the first asymmetric public-key encryption/decryption systems. It uses the properties of modular arithmetic of prime numbers to generate a public key that can be used for encryption and a private key for decryption. The encryption and decryption operations are also based in modular arithmetic. An overview of RSA is shown in Figure 8. 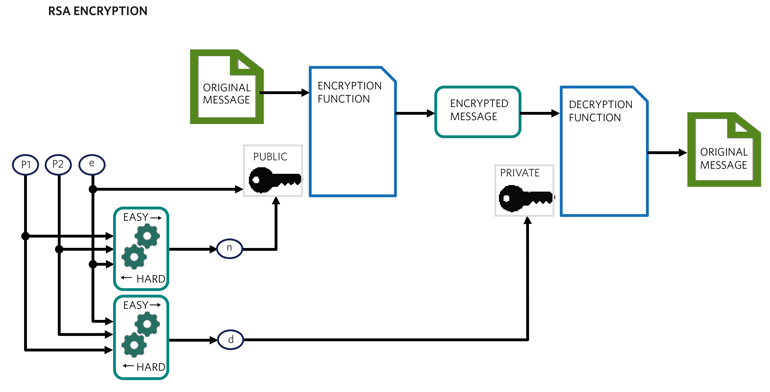 8. This diagram offers an overview of RSA encryption.

In the case of RSA, two large prime numbers are multiplied together to create a part of the public and private keys. The multiplication is easy; factoring back to discover the secret prime numbers is difficult.

RSA security relies on large prime numbers and complex operations. Even the easy path through its trapdoor functions with large keys is cumbersome for most computing systems. Therefore, RSA is often used as a vehicle to send shared encryption keys that can be used in faster, symmetrical algorithms like DES, 3DES, and AES for individual transactions.

The Elliptic Curve Digital Signature Algorithm (ECDSA) allows a participant in a communication to prove authenticity by generating a digital signature for an input message based on a hidden piece of information, known as a private key. This key is used to generate a public key that’s utilized by others to verify the participant’s authenticity.

Digital signatures are generated with an input message, a private key, and a random number. The public key can then be used to verify that the signer (or participant) is in possession of the corresponding private key and is therefore authentic. This concept is illustrated in Figure 9.

The digital signature algorithm was first introduced with modular arithmetic, which depends on large prime numbers and calculations that require heavy use of computing power. The introduction of elliptic-curve cryptography utilizes the mathematical properties of elliptic functions to simplify the math without sacrificing security.

The key generation and signing operations are otherwise known as 1-way or trapdoor functions. Like RSA operations, these elliptic-curve calculations are relatively simple to compute in one direction, but difficult to compute in the other direction. The private key can be viewed as opening a trapdoor, revealing a shortcut to bypass the complex maze of attempts to break a key generation or signing operation.

ECDSA allows one party to sign messages from any party. However, to prove authenticity with ECDSA, a signer must not have foreknowledge of the message to be signed. This lack of control over the message allows another participant in communication to “challenge” the signer with new information to prove possession of the private key.

The Elliptic Curve Diffie-Hellman (ECDH) key exchange allows for two parties to establish a shared key for communication; there’s only one piece of hidden information called a private key. Without the private key of one of the parties involved, an eavesdropper can’t easily determine the shared key. However, the algorithm allows the private key of one party and the public key of the other party to be combined to produce a resulting key that’s the same for both parties. This concept is illustrated in Figure 10.

10. An ECDH key exchange allows for two parties to establish a shared key for communication.

The Diffie-Hellman key exchange was first introduced with modular arithmetic, which depends on large prime numbers and calculations that require heavy use of computing power. The introduction of elliptic-curve cryptography utilizes the mathematical properties of elliptic functions to simplify the math without sacrificing security.

Like ECSDA, the key generation and key combination operations are known as 1-way or “trapdoor” functions. The elliptic-curve calculations are relatively simple to compute in one direction, but difficult to compute in the other direction. The private key can be viewed as opening a trapdoor, revealing a shortcut to bypass the complex maze of attempts to break a key generation or combination operation.

The ECDH algorithm enables two parties to establish a key together, but it doesn’t guarantee that either party is to be trusted. For this, additional layers of authentication are required. For instance, if a public key is given a certificate such as an ECDSA signature calculated with a private key from a trusted key holder, the certification of the public key is verified by authenticating the certificate with the trusted holder’s public key.

By using public keys with certificates from a trusted authority, participants in ECDH can be certain that their counterpart is an authentic participant. In the next article in the series, you’ll learn how physically unclonable function (PUF) technology is used in cryptography.

Zia A. Sardar is Principal Member of Technical Staff at  Maxim Integrated .