We know that copper (Cu) fortunately combines many favorable attributes for electronics and other uses. It’s inexpensive, abundant, easy to refine, an excellent conductor of electricity, and has very high thermal conductivity. Still, for higher-power applications, any lower resistivity and higher conductivity would be a plus since every bit of ohmmeter resistivity increment affects performance (see References below if you’ve forgotten the difference between resistance and resistivity).

Recognizing this, a multidisciplinary research team at Oak Ridge National Laboratory (ORNL) devised a way to improve the performance of copper by combining it with carbon nanotubes (CNTs) to create a conductor with higher current-carrying capacity. The result not only yields lower loss, which is critical for high-power motors, electric vehicles, magnetic-resonance-imaging (MRI) systems, but also reduces the temperature coefficient of resistivity while increasing mechanical strength (the latter aspect is especially useful in power-transmission lines).

Incorporating carbon nanotubes into a copper matrix to improve these attributes isn’t a new idea. However, past attempts at composites by other researchers have resulted in very short material lengths on the order of micrometers or millimeters, or longer lengths that performed poorly. Creating this Cu + CNT composite material—which they call ultraconductive Cu (UCC)—is much more than a matter of skillfully smelting and refining the copper and then adding in the CNT using a metallurgical recipe.

Instead, they employed an already-used CNT technique of depositing single-wall CNTs using electrospinning, a commercially viable method that creates fibers as a jet of liquid speeds through an electric field (Fig. 1) (see References for explanations of electrospinning).

1. Schematic of electrospinning setup (a) and process flow for fabrication of Cu−CNT−Cu composites (b). The color change in the CNT layer (light gray to black) is associated with the removal of organic chemicals after the postdeposition heat treatment.

The electrospinning of polyvinylpyrrolidone (PVP)-based solutions containing CNTs into aligned PVP/CNT nanofibers onto Cu-foil substrates allowed them to control the structure and orientation of deposited materials. This resulted in orientation of the CNTs in one general direction to facilitate enhanced flow of electricity, as seen in their scanning-electron-microscope (SEM) images.

The process steps didn’t end there. They next used magnetron sputtering, a widely used vacuum-coating technique, to add thin layers of copper film on top of the CNT-coated copper tapes (again, see References if you’re not familiar with magnetron sputtering). This was followed by vacuum-assisted thermal removal of organic solvent/polymer from the CNT matrix to achieve a uniformly distributed CNT layer on the Cu surface.

Subsequently, the coated samples were annealed in a vacuum furnace. This produced a highly conductive Cu-CNT network by forming a dense, uniform copper layer and allowed diffusion of copper into the CNT matrix. The result was a copper-carbon nanotube composite 10 centimeters long and 4 centimeters wide. 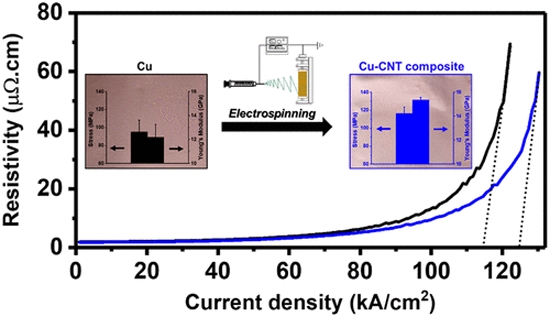 2. This graph of resistivity versus current density illustrates the improvement offered by the electrospun and processed composite when compared to pure copper.

3. Temperature dependence of resistivity for Cu−CNT−Cu composites prepared with 5, 7.5, and 10 wt.% PVP-containing electrospinning solutions (a). The resistivity data for 29-μm-thick pure Cu before and after being exposed to the same processing conditions as the composite samples are also shown for comparison. Temperature-dependent resistivity of similarly processed Cu-CNT-Cu (10 wt.% PVP) fabricated on a 12-μm-thick Cu tape in comparison with those of pure reference Cu counterparts (b). Note that data from two measurements using different samples are shown for 5, 7.5, and 10 wt.% in (a) and 10 wt.% in (b) to illustrate repeatability.

They also evaluated the tensile properties of the UCC material, which had up to 20% improved mechanical properties compared with pure copper (Fig. 4).

4. Typical room temperature tensile stress-strain curves of the same Cu-CNT-Cu composite samples presented in Figure 3a (where the CNT layer is prepared from dispersions containing various PVP concentrations), in comparison with that of the as-received Cu reference (a). Average tensile strength (b) and Young’s modulus (c) of the Cu-CNT-Cu composites. (The error bars in the histograms are standard variations of tensile properties of multiple test specimens from the same batch.)

Of course, as this work was being done at ORNL, they didn’t stop after just basic resistance, current-carrying, and tensile-strength tests. They performed Raman-scattering analysis after heat treatment and found that the CNT network displayed an increased metallic character that supports the enhanced electrical properties of the UCC composites (see References for basics of Raman scattering).

Tolga Aytug, lead investigator for the project, noted “By embedding all the great properties of carbon nanotubes into a copper matrix, we are aiming for better mechanical strength, lighter weight, and higher current capacity. Then you get a better conductor with less power loss, which in turn increases the efficiency and performance of the device. Improved performance, for instance, means we can reduce volume and increase the power density in advanced motor systems.”

The work is detailed in the paper “Copper–Carbon Nanotube Composites Enabled by Electrospinning for Advanced Conductors,” published in ACS Applied Nano Materials, along with Supplementary Material.

BYJU’s The Learning App, “Difference Between Resistance and Resistivity”