A novel MIT-developed system makes it possible to design robot shapes and determine its optimal ability to traverse a particular terrain.

The simulation-based system is called RoboGrammar and is a fully automated approach to robot design that can simultaneously optimize the physical structures and controllers of robots.

The goal of the system is to take a set of user-specified primitive components and generate an optimal robot structure and controller for traversing a given terrain, according to an MIT research paper, “RoboGrammar: Graph Grammar for Terrain-Optimized Robot Design.”

The process starts with the user defining the problem and inputting specified primitive components (such as joint types, links and wheels), each with prescribed attributes (such as rotational angles and axes, sizes and weights). The user also specifies the variety of terrain to be traversed, which can include combinations of elements like steps, flat areas, or slippery surfaces. This step is key to making sure the robot can be built in the real world.

In the RoboGrammar simulation framework, noted the paper, each robot is represented by a graph. To this end, the researchers employed a set of production rules and valid graphs (graph grammar), which allows complex 3D modelling. Scalability and applicability to physical systems are among the advantages of using this method. The researchers credit ideas from earlier examples, such as graph grammars for epicyclic gear train systems and for modeling self-assembly of robotic systems, as inspiration for their method.

The grammar rules are complemented by physical and controller synthesis, which allowed the researchers to optimize and test robot designs. An algorithm called model predictive control (MPC) was used to rapidly find a stable, periodic gait and which prioritized rapid forward movement. 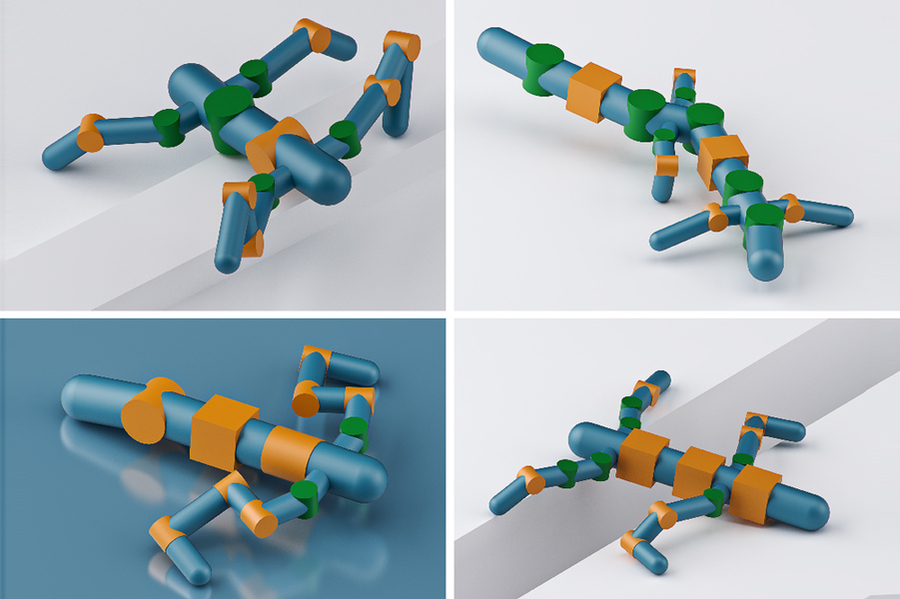 Allan Zhao, the paper’s lead author and a PhD student in the MIT Computer Science and Artificial Intelligence Laboratory (CSAIL), said the shape and the controller of the robot are intertwined. “We have to optimize a controller for every given robot individually,” he said.

Zhao drew inspiration from arthropods—insects, spiders and lobsters. “They’re characterized by having a central body with a variable number of segments. Some segments may have legs attached,” said Zhao. “And we noticed that that’s enough to describe not only arthropods but more familiar forms as well,” including quadrupeds. Zhao adopted the arthropod-inspired rules for their flexibility, but added mechanical parameters, such as wheels as an alternative to legs.

Once each simulated robot is free to move about, the researchers can seek out high-performing robots with a “graph heuristic search.” This neural network algorithm iteratively samples and evaluates sets of robots, and it learns which designs tend to work better for a given task. “The heuristic function improves over time,” explained Zhao, “and the search converges to the optimal robot.”

Unlike many alternative approaches to generative robot design, the authors said this framework allows researchers to structure and limit the design space by applying a graph grammar, while also allowing creative solutions to emerge.

The research team plans to build and test some of RoboGrammar’­s optimal robots in the real world.

Zhao believes the system could also be adapted almost immediately to pursue robotic goals beyond terrain traversing. One example would be to help populate virtual worlds. “Let’s say in a video game you wanted to generate lots of kinds of robots, without an artist having to create each one,” he explained.