The quest to replicate the flexibility, controllability, and dexterity of human muscles and associated limbs has inspired some truly “non-obvious” but highly workable actuator concepts. For example, actuators comprised of twisted threads that have been tightly wound around a mandrel can “pull-in” along their axis as the thread is heated—either by an tiny internal heater or by using conductive threads and self-heating—and then lengthens.

Called twisted-coil actuators (TCAs), these devices can be fabricated in various ways to provide types of motion that remarkably resemble a human muscle in action or even an octopus tentacle. And the amount of force they can develop is surprisingly high. However, existing TCA-actuated soft robots can only generate simple motion, since TCAs fabricated with conventional methods must be preloaded to generate a large contraction and thus can’t actuate soft robots properly.

Now, research, fabrications, and demonstrations at the Colorado State University by a team headed by graduate student Jiefeng Sun, working under Prof. Jianguo Zhao of the Mechanical Engineering Department, has led to an enhancement to TCA fabrication that can deliver 48% “free strokes” (contraction without preloading). By using a process that creates uniform gaps between neighboring coils, the TCA “muscle” has the ability to contract without being preloaded (Fig. 1).

Words cannot adequately convey the capabilities of these actuators, but the two-minute silent video below shows both their basic functionality as well as their use in robotic grippers (and they could also be used, in principle, for shape-shifting of airfoils and other surfaces).

These actuators are made by continuously twisting conductive-thread fibers (a standard item available at local retail sewing and fabric stores), coiling it into a spring-like shape using a mandrel, and then heating them to a specific temperature to anneal and “set” the coiled shape (Fig. 2). These free-stroking actuators can be embedded into what’s known as a “soft robot” while achieving large magnitudes of motion. 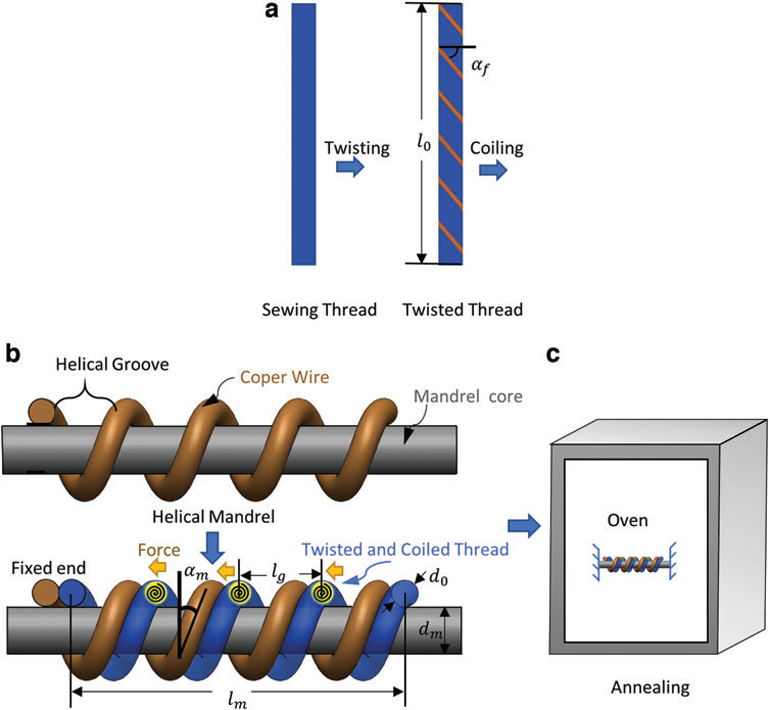 By installing two or more such TCAs along a common flexible rod and controlling them independently, it’s possible to create bending and twisting motion in addition to simpler linear motion.

The TCA was powered by 10-V/1-A dc source, which is easily programmed to tailor the heating over the range rather than having to operate either full off or full on. As an added feature, the small change in thread resistance as it lengthens (and thus its diameter shrinks) can be measured, resulting in an inherent feedback sensor of the actuator status.

The researchers characterized how the various fabrication parameters influence the TCA’s stroke and force capability (Fig. 3), while also demonstrating that such TCAs can actuate centimeter-scale soft robots with programmable motions (gripping, twisting, and three-dimensional bending) (Fig. 4). 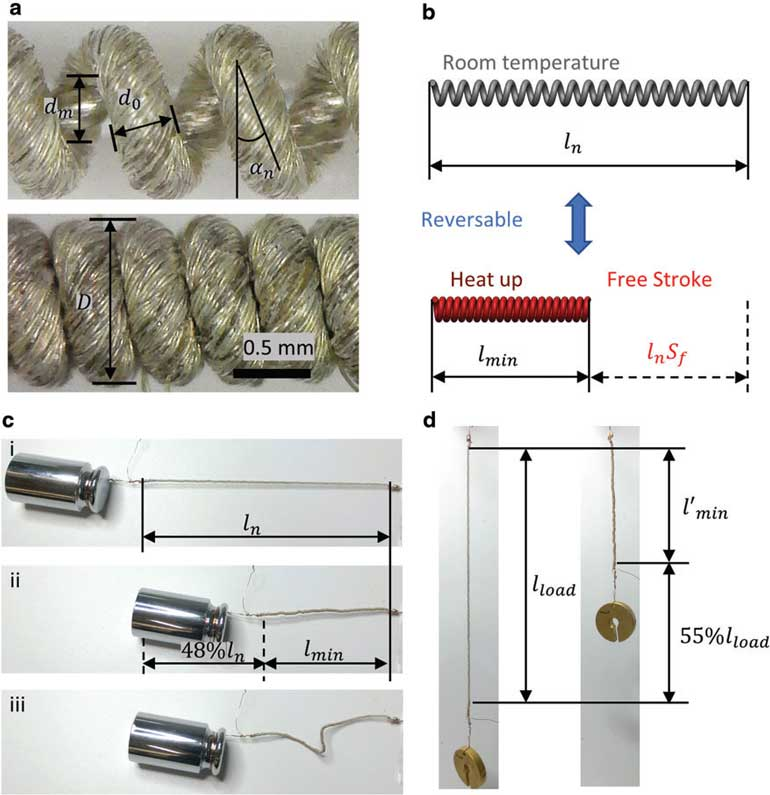 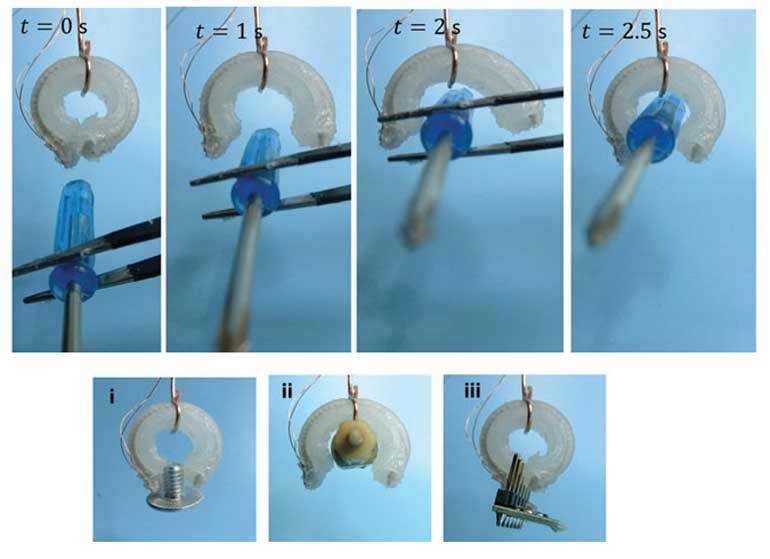 The work is described in full detail in their well-written and highly readable paper “Twisted-and-Coiled Actuators with Free Strokes Enable Soft Robots with Programmable Motions,” published in Soft Robotics. While that paper is behind a paywall, the lead researcher has fortunately posted an accessible copy here. In addition, previous thesis work by an earlier student also working under Prof. Zhao provides full modeling of the mechanical relationships among multiple factors such as thread diameter and winding, extension, pitch changes, forces generated, and resistance changes, and is posted as “Modeling of Twisted and Coiled Artificial Muscle for Actuation and Self-Sensing.”