Can AI Explain Itself? | Machine Design

For the past couple of decades, productivity growth in manufacturing has been incremental, very likely because the evolution of manufacturing technology has hit a wall. The introduction of robotics—one of the industry’s most transformative technology to date—likely caused a long-lived spike in productivity. But this tailwind tapered off by the early 2000s and not much has changed since.

Trends in manufacturing today require great flexibility—consumer demands for more options and constant upgrades translate to shorter product cycles, increased SKU proliferation and mass customization. But automation is traditionally inflexible. The macro and microeconomic effects of this inflexibility are clear both in the industry’s productivity statistics and in factory-level economics.

The classical economist’s “growth accounting” toolbox, first developed by Robert Solow in the 1950s, maintained that GDP growth (or growth in a component of GDP) can come from:

That last metric is often referred to as “the measure of our ignorance” and describes the efficiency gains (or losses) associated with any growth (or decline) in output that is not a result of changes in measured inputs. Increases in TFP can result from improvements in technology (better software or more effective automation), improvements in managerial practices, a more educated workforce, the reallocation of resources and other unmeasured or unmeasurable factors.

In his 2016 book The Rise and Fall of American Growth: The US Standard of Living Since the Civil War, Northwestern University Professor Robert Gordon postulated that TFP is the key to productivity growth. The other drivers of growth are exogenous and will vary with hours worked, investment rates and business cycles. Only TFP growth is a clear indicator that labor productivity is rising permanently and independently of its drivers. He asserted that the surges of TFP between 1920 to 1970 and 1994 to 2004 in the U.S. were anomalous and that TFP levels between 2004 to 2014 are a better indication of the future (Fig. 1).

1. U.S. TFP growth over different time periods. (Source: Fig. 17-2 of Robert Gordon’s The Rise and Fall of American Growth: The US Standard of Living Since the Civil War.)

At an annualized growth rate of 1.89%, TFP rose 2.5× between 1920 and 1970, which Gordon attributed to the introduction of electricity and the internal combustion engine during the Second Industrial Revolution (or Technological Revolution). Gordon, along with a team of researchers from the U.S. Bureau of Labor Statistics (BLS), attributed the 1994-to-2004 bump to “an unprecedented and never-repeated rate of decline in the price of computer speed and memory and a never-since-matched surge in the share of GDP devoted to investment in information and communication technology (ICT).”

He argued that, despite the frenetic pace of innovation in digital technology, robots, automation and AI, actual technological advancements have been incremental and left little impact on the growth rates of TFP and labor productivity. According to Gordon, overall productivity growth in the U.S. economy has stalled and will remain at these levels indefinitely.

However, while it’s true that these two periods experienced drastic technological changes that are largely responsible for spikes in TFP, the fact that those trends were unprecedented does not preclude something similar happening in the future. It is entirely possible that we will experience another technological renaissance that produces a spike in TFP.

Parallel to the U.S. economy at large, TFP in the manufacturing sector grew by an average of 2% per year from 1992 to 2004, with manufacturers increasing their production of goods with relatively fewer inputs. And from 2004 to 2016, manufacturing TFP declined by an average of 0.3% per year (Fig. 2). Gordon, the BLS team and many other economists agree that some of this slowdown in TFP can be attributed to the end of Moore’s Law. 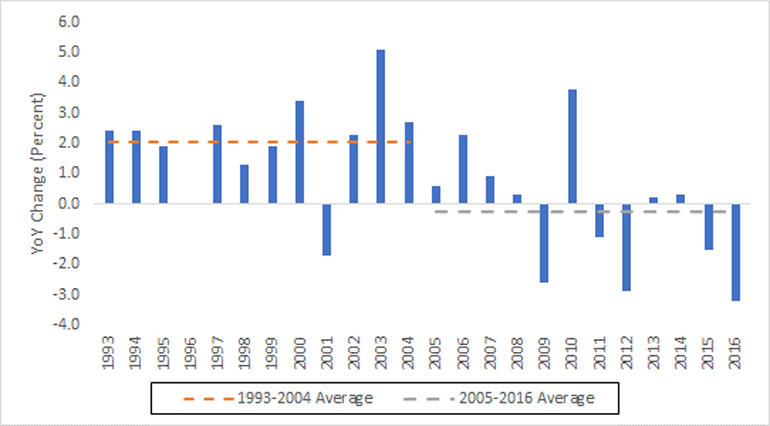 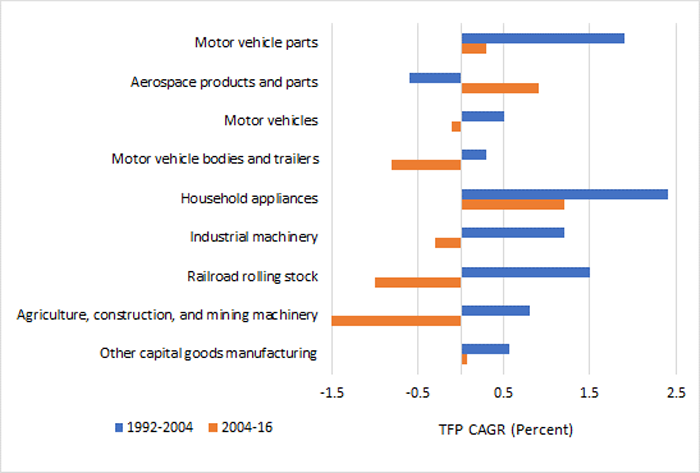 That must mean that manufacturing TFP is affected by other economic factors, such as the capital, labor, materials, purchased services and energy used in production. Additional analysis from the BLS team that tracked changes in the average distribution of these production factors found that between 1992 and 2004 and 2004 and 2016, manufacturing transitioned away from investing in labor and toward capital, materials and purchased services (Fig. 4). 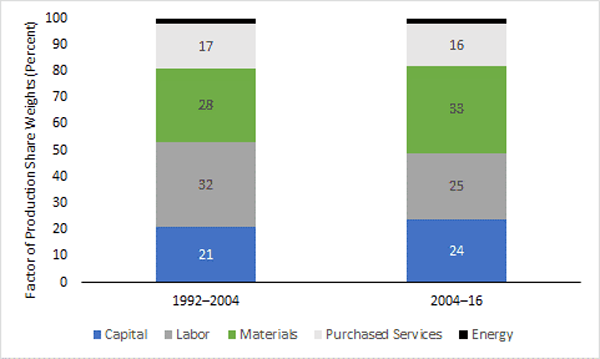 These changes in resource allocation appear to be related to changes in TFP growth. The average annual rate of 2004 to 2016 TFP growth was lower than during 1992 to 2004 in 62 out of the 86 manufacturing subsectors BLS analyzed. And of those 62 industries, 53 had decreases in the average share of labor in production processes.

We can infer from all of this that the trend away from labor and toward capital in manufacturing production is a major culprit of the TFP slowdown. But why exactly?

Decreased investment in labor is consistent with increased investment in automation, external materials and external services (i.e., outsourcing—researchers from Cornell University’s ILR School asserted that outsourcing has contributed as much as or even more than IT to the lack of manufacturing labor productivity growth). Due to the limitations of current automation technologies, the presence of more automation necessarily reduces the presence of humans in a manufacturing process step (more on this later).

TFP growth results from innovations such as technological advancements and workstyle improvements. Innovations are produced by people—ideally, diverse groups of people with specialized skills and knowledge. Therefore, the trend away from labor and toward capital is essentially eliminating a source of innovation in manufacturing. This stance is supported by economists Simon Baptist and Cameron Hepburn, who found that higher labor input is positively (and possibly causally) correlated with TFP growth, and MIT’s David Mindell in his 2015 book Our Robots, Ourselves argued against the lights-out fully automated factory.

Thanks to early hubristic promises of robotics causing unparalleled and permanent productivity gains, manufacturers have historically been highly motivated to invest in automation. But industry-wide work done in the early 2000s by Frits K. Pil and John Paul MacDuffie as part of Phase Three of the International Motor Vehicle Project (IMVP, now morphed into the Program on Vehicle and Mobility Innovation) showed that automation doesn’t necessarily mean higher productivity. This conclusion is more explicitly supported by Ron Harbour, a manufacturing expert at Oliver Wyman (and author of the Harbour Report), in a 2017 interview with BRINK:

“When it comes to what functions to automate, we’ve seen differing philosophies. The manufacturers we saw as most competitive—the Japanese, the Koreans—needed a business case for automation. Whereas automakers in Western Europe and even the United States went more aggressively towards automating things, even when that didn’t pay off. We’ve seen examples of companies installing automation that required more people, with higher skills, than were required before. They did it just to display their technological prowess. I’ve always been dismayed by that.”

Max Warburton and Toni Sacconaghi of Bernstein Research have used IMVP data and Ron Harbour’s quantitative analysis to illustrate an inverse correlation between automation levels and labor productivity. Figure 5 (adapted from their report) shows production time per vehicle for specific manufacturing plants by German, French, U.S., Korean and Japanese car makers in the EU and U.S.

5. Hours per vehicle and levels of automation across the automotive industry. (Source: Bernstein Research, March 28, 2018 report, “Tesla: Model 3 and the fallacy of automation—What we believe is wrong and why it may remain difficult to ramp production.”)

Depending on the relative labor and machine running costs, more hours per vehicle does not necessarily translate to higher costs per vehicle, but if the allocation of labor and capital were optimal, we would see both increasing automation and decreasing hours per vehicle. Since the research showed that is not the case, some contend that over-automation is counterproductive.

It is also the case that in many verticals and manufacturing steps, automation is just not present—again, due to the fact that the presence of automation necessarily limits the presence of humans. Figure 6, based on data collected by a different team at Bernstein Research, estimates the level of automation for a number of steps in various industry verticals and shows significant variation. Some steps are more or less fully automated, while in others automation is basically non-existent—even within the same industry vertical.

The common driver of this heterogeneity is the level of human dexterity, judgment and ingenuity required by a particular manufacturing step. Steps with greater needs for human skills would not only be too complex to design and build with automation, but also prohibitively costly to attempt to automate.

Engineers Igor Gorlach and Oliver Wessel examined VW plants in Wolfsburg, Germany, and Uitenhage, South Africa, and found there is an optimum level of automation for a given manufacturing process. Figure 7 (adapted from their research) shows how a mix of labor and capital (automation and other hardware) leads to a U-shaped total cost curve, where a particular combination of labor and capital minimizes costs. 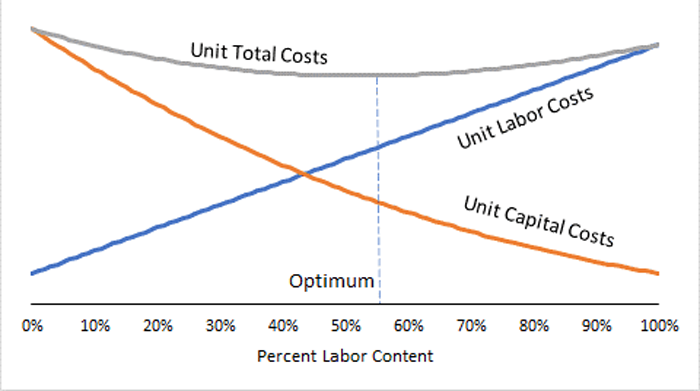 7. Representative cost structure in automotive manufacturing as a percent of labor content. (Source: Gorlach and Wessel, “Optimal Level of Automation in the Automotive Industry.”)

This finding was exemplified by a Veo Robotics case study on palletizing. The palletizing process Veo examined required an intermediate step where bumpers were mounted on the four corners of a pallet as it was filled by a robot. The palletizer itself, a standard large-payload ABB Model IRB460 palletizing robot arm, was not designed to install the bumpers on its own, so the end-user had to consider various solutions.

One approach was to automate the whole palletizing process and build a specialized piece of automation—a “bumperizer”—with the sole purpose of mounting the four bumpers at the appropriate point in pallet construction. This approach entailed low labor content and high capital costs (around $175,000, which is three times the cost of an average palletizing robot), falling on the left side of Fig. 7. Alternatively, the end-user could have eliminated the palletizing robot and relied entirely on manpower for pallet stacking and bumper mounting. This approach entailed high labor content and low capital costs, falling on the right side of Fig. 7.

Neither solution allowed the manufacturer to keep the cost of palletizing at an optimum low. Only the third approach, where the robot handled palletizing and a human installed the bumpers, kept labor and capital costs at levels that resulted in lower total unit costs. This approach—a combination of humans and machines working together—was superior to both fully automated and fully manual operation, but was only possible with a system that enabled safe human-machine collaboration.

Automation can introduce inflexibility that destroys value and reduces productivity. In these situations, the ability to dial back some of the automation and replace it with human flexibility, dexterity, creativity and judgment would be immensely valuable. However, humans and machines currently cannot work safely in close proximity, so processes must be either fully automated or fully manual.

State-of-the-art sensing, processing and actuation technologies are hardly comparable to humans, meaning many manufacturing steps with complex tasks require human input. The presence of humans in turn limits how much automation can be added to the process. Taken together, this leads to suboptimal allocations of labor and capital.

Breaking through this technological barrier and enabling widespread, safe human-machine collaboration in manufacturing processes will enable innovations and productivity improvements as both capital and labor are utilized more efficiently. For example, in another Veo Robotics case study on a simple assembly task, Veo found a 2× improvement in cycle time when a human was able to safely collaborate with a robot. Similarly, MIT’s Julie Shah found that when a person works with a “human aware” robot to build simple structures using blocks, their idle time is reduced by 85% relative to all-human teams performing the same task.

The inefficiencies caused by inflexible automation that are plaguing the manufacturing industry are restricting productivity and TFP growth. Shah’s research and Veo’s case studies produce a case that when the technological barrier causing those inefficiencies is overcome, it’s possible to unlock major productivity gains with an optimal combination of humans and machines. Only when enabling technologies for safe human-robot collaboration become widely available can we expect to see another spike in manufacturing TFP.