When the world was subjected to the COVID-19 pandemic last year, its massive toll brought businesses and jobs to a screeching halt. Most people tuned in to navigate the shockwaves and struggled to cope with the uncertainty of the times. Others, like Eric Lacoste, mounted a response.

Between jobs and faced with the prospect of making his next career move, the former automotive components manufacturing executive was at a crossroads: He could seek out the next corporate role or start a business.

Lacoste chose the latter. He decided he could have “a better grip on the outcome” if he invested in his own venture. “In a year of unexpected events and shocks in private equity markets, investing in the stock market seemed risky,” Lacoste explained. “The crisis set the stage for a more creative approach.”

A franchise broker presented several options in June 2020, but a prospect to service the heavily industrialized areas of Detroit seemed like the best fit. An operating environment where big businesses such as GM, Ford and Fiat Chrysler rely on hydraulic machinery every day would not be out of his comfort zone. His venture, Pirtek Auburn Hills, was operational by November 2020. “It’s a process that didn’t take too long, but then again, COVID gave people time,” he quipped.

Independent business owners know that a start-up has no guarantee of survival, but setting up shop during the Great Lockdown comes with a unique set of challenges. Fortunately, noted Kim Gubera, president and CEO of Pirtek USA, on-site hydraulic and industrial hose repair services is vital to the preservation of critical infrastructure and was deemed an essential service.

Hydraulic hose failure caused by abrasion, poor routing, high temperatures, improper assembly or poor fitting can occur at any time. These failures have serious financial and safety consequences, Lacoste noted, and plants can’t afford unscheduled downtime. “We bring the mechanical know-how [to the site] to replace the equipment without having to bring the equipment back to the yard,” he added.

Pirtek is part of a $10 billion hydraulic hose and fittings industry and is expected to grow by $506.09 million during 2020-2024. Billed as a supplier of premium fluid transfer solutions, the company was started in Australia in 1980 and found its way to the U.S. in 1996. Its business model is built around kitting out mobile service vehicles so technicians can visit the customer’s site to replace failed hoses on industrial and mobile hydraulic machines, as well as to perform installations and offer preventative maintenance programs.

It turns out the concept was an efficient way to conduct business during the pandemic, as autonomous technicians were fully equipped with mobile workshops and could make service calls at manufacturing facilities. This differentiator reflected in the organization’s performance in 2020, since it did not experience the double-digit drop that many companies reported over the course of the year. “As we go forward, we’re all hoping that the vaccine is going to return us to whatever the new normal is,” said Gubera, “but I feel that we’ve done quite well, and some franchisees are exceeding the budget.”

Still, not unlike most companies, Pirtek had to adapt and modify where needed. Gubera said that the workaround for running the risk of having customers walk into a store for repair services was to set up tents outside. “This way customers did not have to go into an actual location to get service, or they could just drive through to get service,” she said. 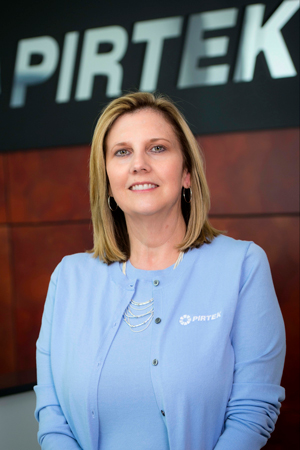 The company operates on two franchise concepts: Tier 1 is built around a brick-and-mortar store, while Tier 2 provides mobile-only services. Lacoste, who is new to the franchise game, operates under the Tier 2 concept. The initial investment for a Tier 2 franchise is about $162K and includes the mobile sales and service units, training expenses, computer systems and five months of operating expenses. His business focuses exclusively on mobile repair and sales, which allows him to generate the revenue and a customer base with a view to scaling his operation. The investment is structured so a franchisee can convert to Pirtek’s Tier 1 brick-and-mortar model within the first three years.

Lacoste’s option includes his investment in two branded vans fitted with a workbench, crimper, saw and inventory of hoses and fittings. “I buy the fittings and hosing from the franchise and then I do the cutting and assembly of the hose specifically for the need of the customers,” he explained. “The various sizes and variety of fittings means there is quite a bit of complexity—I carry about 850 tags of different inventory of fittings.”

With just four months under his belt, Lacoste is learning the ropes and actively scopes out fresh opportunities in his territory. He has learned that sizing hydraulic hose is the most basic and essential factor in hydraulic hose selection. His inventory covers 90% of the work and can be used in assemblies that require up to an inch-and-a-quarter in diameter. Requests for larger, more specific requests—such as an inch-and-a-half or two inches—are rare, but Lacoste is beginning to stock more sizes of hose in his storage unit.

“In the industrialized area of Detroit, particularly with stamping and injection molding manufacturers, there is more opportunity for the larger hoses,” he said. “In the past two months, these hoses represented about 40% of turnover.” This is also where networking with fellow franchisees is helpful. The four Pirtek stores located in Detroit stock larger equipment and Lacoste collaborates with these stores, as well as with the rest of the Grand Rapids territory in meeting the needs of his customers.

The real value proposition, according to Gubera, is that business runs 24/7 with a one-hour ETA. “When heavy machinery is down, the most important thing is getting it back up and running,” she said.

Lacoste agrees. A client called him at 9 p.m. on a Saturday night to report a problem with the adaptor port of a plastic injection machine. They needed to replace it. “A maintenance crew would typically handle the problem in-house, but the operator said the plant was operating on a skeleton staff and he did not know how to do it,” explained Lacoste. Since he lived 10 min. from the factory, he responded in record time. “But I didn’t have the part,” Lacoste recalled.

He sourced the part from a nearby store so the plant could have the machine back up and running within an hour-and-a-half. Working in hydraulics often means working at high pressure, so a “network is a good thing,” said Lacoste. “Hoses, fittings and components have to be exact and we have to be able to identify the parts. At the end of the day, we are a solution provider. Even if we don’t have the part at the outset, the attitude is, ‘How can we resolve the issue?’”

Pirtek coaches that common failures may be attributed to two factors: site damage and wear-and-tear. Exposed hoses, especially on mobile equipment, can easily be damaged during day-to-day operations. This could lead to abrasion, for instance, where the high-pressure hose assembly rubs against another hose or clamp. Similarly, heat or extended exposure to ultraviolet light may cause the outer cover of the hose to become brittle and crack, exposing the reinforcement layers.

Strict protocols are advised in controlling contamination in hydraulic systems, as it can come from several different sources. Every time a connection or part is removed or loosened there is a risk that contaminants can enter the system. Examples include removing a cap or filler breather to fill with oil and replacing any component, including hose assemblies, worn or damaged seals or scored cylinders, and the breakdown of older components such as pumps and control valves.

To avoid contamination, technicians working on high-pressure hoses should not replace the hose assembly without locating the cause of the failure, according to Pirtek’s technicians. If two hose assemblies are rubbing together, for example, the hose assembly ought to be routed differently. Alternatively, an abrasion-resistant sleeve can be used to protect the assembly. If heat is an issue, the technician selects hoses rated for high temperature environments.

On the flip side, low temperatures may cause the outer cover of the hose to crack. A specific line of thermoplastic hose, for instance, can be fitted to forklifts working in large, refrigerated storage units designed to resist temperatures as low as −65° Fahrenheit.

Age-related failure is another common cause, said Lacoste, adding that manufacturers’ recommended life for hydraulic hose can range between one to five years. “There shouldn’t be any problems with the hose within the five years, provided it’s run the right way,” said Lacoste. “But with repetitive substance abrasion it won’t last that long.” For the most part, he noted, wear-and-tear does not originate from the inside—the contamination of the fluid itself—but from the movement or housings on the outside.

If leaving behind a stint managing a component manufacturer’s two manufacturing facilities and engineering center with a P&L of $200 million per year provided the fortitude to start a business during the Great Lockdown, it also doesn’t hurt that Lacoste holds an MBA focused on mid-cap companies and an engineering Master’s in mechanics and electricity.

Experience has taught him the cost of unscheduled downtime, so he can explain why operations and maintenance crews are under pressure to balance the priorities of budgets and reducing downtime. “When I was working in plants, I tended to operate by putting maintenance where it needs to be, so that there are no surprises,” he said.

Franchisees need not have industry experience, noted Gubera. “Pirtek operates with problem-solvers; that’s really the mindset,” added Lacoste. “And we operate on the basis of a long-term partnership.”

Still, in charting a course to success, Lacoste’s history with the industry hints at his future. For him, the idea that self-efficacy alone steers success seems ineffectual. He points out the skillset for troubleshooting common causes and failure of hydraulic hose follows a standard course of procedures, which were covered in Pirtek’s training.