Today, the performance and lifespan of every battery is determined during the formation process, with test equipment designed for specific batteries, large or small. However, since the Li-ion battery market encompasses all shapes and capacities, it’s difficult to create a single, integrated tester that can handle the wide range of capacities, currents, and physical form factors with the required accuracy and precision.

Given the increasingly diverse demands placed on Li-ion batteries, there’s a strong need for high-performance, flexible testing solutions that minimize tradeoffs but also are cost-effective.

Today’s Li-ion batteries span a wide range of sizes, voltages, and applications that didn’t exist when the technology first hit the market. Initially designed into relatively small devices such as laptops, phones, and other portable electronics devices, you’ll now find them in much larger form factors like EVs and solar-energy battery storage. This means larger series-parallel connected battery packs with higher voltages and larger capacities. For example, some EVs can have banks of batteries configured with up to 100 series and more than 50 parallel configurations. The batteries are physically bigger, too.

Stacking batteries isn’t new—a typical rechargeable Li-ion battery pack in the average laptop has several batteries in series. But because today’s battery packs are larger, testing becomes more complicated and it can affect the overall performance of the pack.

Each battery must be nearly the same as its neighbor for the overall pack to perform at an optimal level. The batteries affect each other such that if one battery in a series is lower in capacity, every battery in the pack will function sub-optimally. That’s because their capacity is downgraded by the battery monitoring and rebalancing system to match the lowest-performing battery. One bad apple does, in fact, spoil the entire basket.

The charging/discharging cycle further illustrates how one battery can bring down the performance of the entire pack. The battery in the pack with the lowest capacity will decrease its state of charge the fastest, resulting in an unsafe voltage level. Therefore, the pack as a whole can no longer be discharged. When it’s time to charge the pack, the battery with the lowest capacity will be charged to full first, and the rest of the batteries won’t be charged further, either.

With EVs, such a scenario leads to reduced effective overall available battery-pack capacity and thus the vehicle’s range. Furthermore, degradation of the low-capacity cell will be accelerated because it reaches excessive voltages at the end of charge and discharge, before safety protections stop the process.

Regardless of the end equipment, as more batteries are stacked in series and in parallel in packs, the problem becomes more exaggerated. The obvious solution is to ensure each battery is manufactured to be exactly the same and that identical batteries are grouped together in the same battery packs. But with the inherent manufacturing process variations in battery impedances and capacities, testing becomes critical—not only to eliminate defective parts, but also to sort out which identical batteries to put in which battery packs. On top of this, the charge and discharge profile applied to the battery during its formation process greatly affects its characteristics and is constantly evolving.

Battery testing isn’t new. However, since their inception, Li-ion batteries have put new pressures on test equipment accuracy, throughput, and board density.

Li-ion batteries are rather unique because of their extremely dense energy-storage capabilities and, if not charged and discharged properly, they can potentially create a fire and be explosive. During formation and testing, this storage technology demands a great deal of accuracy that’s further compounded by the many emerging applications. There’s an even wider variety of Li-ion batteries in terms of shape, size, capacity and chemistry, which in turn affects the test equipment needed to make sure the correct charge and discharge profiles are precisely followed to ensure maximum storage capacity, reliability, and quality

Having the right test equipment for so many different Li-ion batteries and different manufacturers raises the cost of testing, since no one size fits all. In addition, constant industry innovation means ever-changing charging and discharging profiles to optimize formation, making the battery tester an important development tool in new battery technologies.

Regardless of its chemistry and mechanics, there’s an infinite number of ways that one can try to charge and discharge a Li-ion battery during formation. In turn, it has battery manufacturers putting pressure on testers to provide unique tester capabilities.

Accuracy is obviously an essential capability. But it doesn’t just mean the ability to maintain high current control accuracy down to very low levels—it also includes the ability to switch between charge and discharge modes and between different current levels incredibly quickly. These requirements aren’t solely being driven by the need to mass-produce today’s Li-ion batteries with consistent characteristics and quality, though. Manufacturers also want to use the testing process and equipment as an innovation tool to create competitive advantages in the marketplace, such as modifying the charging algorithms to improve capacities.

Despite the demand for a wide variety of tests for a diverse range of batteries, today’s testers are optimized for specific battery sizes. If you’re testing larger batteries, for example, there’s going to be a larger current requirement, which translates into larger inductors and thicker wires, among other characteristics.

Many factors are involved in creating a tester capable of handling higher currents. However, many factories aren’t producing just one kind of battery. They could be producing an extended set of large batteries for one customer, with all of the testing requirements that those batteries entail, and another set of small batteries for a smartphone customer, with much lower current requirements.

This is where testing gets expensive, because battery testers are optimized for current. The testers capable of handling higher currents are usually larger and more expensive, requiring not just larger silicon but also magnetics and routing to satisfy electromigration rules and minimize parasitic IR drops in the system.

Factories must keep a variety of testing equipment on hand because they must be ready to produce and qualify a wide variety of battery types. Depending on the type of batteries produced at the factory at any given time, some testers could be incompatible with those specific batteries and might be sitting idle, further adding to the expense, since testers are a significant capital investment.

Whether it’s the factory mass-producing common Li-ion batteries for today’s common and emerging use cases or battery manufacturers looking to leverage the testing process to create new battery products, flexible test equipment is needed to accommodate a broader range of battery capacities and physical sizes. This will reduce capital expenses and improve the return on investment made in testing equipment.

Many competing requirements come into play when attempting to properly optimize a single, integrated testing solution. There’s no panacea that will address every Li-ion battery-testing scenario, but Texas Instruments (TI) has come up with a reference designs that minimize tradeoffs between cost-effectiveness and accuracy.

There’s always going to be a battery-testing scenario that’s so unique, it requires an equally unique solution. But cost-effective test equipment that can address a wide range of Li-ion battery types is feasible, whether it’s a small smartphone battery or a large pack for an EV.

TI has developed a solution to achieve the precise, full-scale charge and discharge current control accuracy required for the many Li-ion batteries on the market. Its Modular Battery Tester Reference Design for 50-, 100- and 200-A Applications uses a combination of 50- and 100-A battery-test designs to create a modular version capable of reaching 200-A maximum charge and discharge levels (Fig. 2). 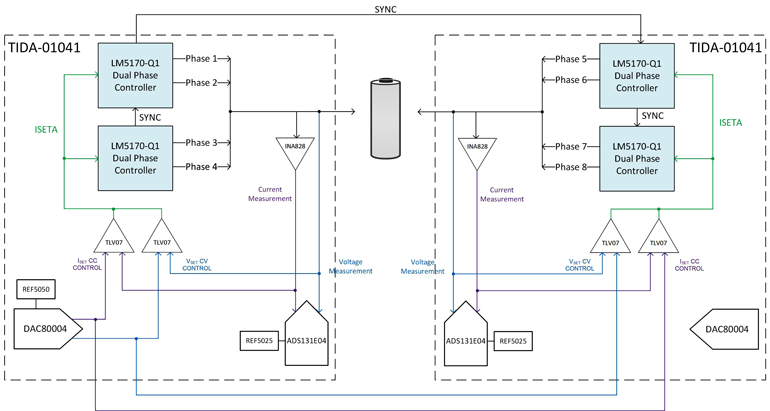 2. The modular battery-tester solution can handle up to 200 A.

The company’s Battery Tester Reference Design for High Current Applications, for example, uses constant-current and constant-voltage control loops to support charge and discharge rates as high as 50 A. The reference design leverages the LM5170-Q1 multiphase bidirectional current controller and the INA188 instrumentation amplifier to precisely regulate the current flowing into or out of the battery. The INA188 implements and monitors the constant-current control loop, and because the current might flow in either direction, the SN74LV4053A multiplexer can adjust the inputs of the INA188 accordingly.

This specific scenario demonstrates the feasibility of building a cost-effective testing solution by combining several key technologies to create a modifiable platform for applications that need higher current or multiple phases. This flexible solution not only satisfies today’s requirements, but also anticipates the future automotive cell growth that will soon push demand for tester current capabilities beyond 50 A.

Reference designs for Li-ion battery testing enable you to invest in lower-current battery-test equipment and use it in parallel, rather than making costly investments in multiple architectures for different current levels. Being able to use test equipment for a range of currents maximizes your investment in battery-testing equipment, reduces overall costs, and provides the flexibility to adapt to ever-changing demands for Li-ion battery testing.

Taras Dudar is a Systems Design Engineer and Bryan E. Bloodworth is a Distinguished Member Technical Staff at Texas Instruments.