In a Voluntary Safety Self-Assessment (VSSA) report filed with the U.S. National Highway Traffic Safety Administration (NHTSA), BMW said it plans to introduce what could become the first system on U.S. roads to qualify as “Level 3” conditional automation by SAE’s standards. By way of review, SAE Level 3 involves automated driving rather than driver support features (Levels 0, 1, and 2). Level 4 means that the system controls all aspects of the driving tasks, including when a driver doesn’t respond appropriately to requests to intervene, while Level 5 is entirely autonomous.

BMW’s system is coming with its iNext EV, an all-new, all-electric production vehicle arriving possibly as early as 2021 (Fig. 1). The iNext will feature the automaker’s 5th-generation eDrive system, which is reported to offer up to 530 hp and a high-density, lightweight 80-kWh battery pack good for a range of around 400 miles. Using an e-AWD system, the electric SUV is expected to do 0-60 mph in under 4 seconds.

1. BMW’s Level 3 system will be implemented in the iNext EV, an all-electric production vehicle arriving possibly as early as 2021.

According to BMW, the automated driving system (ADS) will be available only on limited access highways up to a maximum speed of 85 mph (or up to the permitted speed limit), when weather and environmental conditions allow the vehicle’s sensors to operate without impairment.

Since the BMW Group believes that drivers should have the choice of driving themselves or of being driven, the BMW iNext will feature two driving modes: Boost Mode and Ease Mode. In “Boost Mode,” the driver can retain the traditional controls and drive the iNEXT in a traditional manner. In “Ease Mode,” the driver can activate the automated driving system and take their eyes off of the road while he/she and passengers utilize a space in which to engage in a wide range of other activities.

BMW said in the report that its system can recognize performance limits and issue a takeover request (TOR) to the driver with sufficient lead time for the driver to perform a takeover (TO) before reaching the system’s limits. While the driver doesn’t have to watch the road, the system would require drivers to stay awake, buckled in, and alert enough so they’re able to resume driving after a TO request. In the unlikely case that the driver doesn’t take over the driving task within this period, the SAE Level 3 BMW ADS performs a risk mitigation maneuver, i.e., it brings the vehicle to a complete stop as safely as possible.

BMW noted that a camera will watch the driver to make sure they stay awake. The report also said the system uses changing lights in the steering wheel as well as audio alerts and seat vibrations to tell a driver they need to take over.

In the case of suddenly bad weather, a malfunctioning sensor, or the end of a highway, the system will ask the human to get back to driving. To detect if the driver has taken over the driving tas, the driver monitoring system also contains a hands-on detection sensor in the steering wheel, a steering-torque sensor, and pedal-position sensors. If the driver operates user-interface elements, opens the doors, or tries to shift gears, this also will be detected by sensors similar to those used in conventional cars.

As for iNEXT road monitoring, the vehicle uses a number of integrated sensors to perceive its surroundings, including cameras, radar, LiDAR, and ultrasonic sensors (Fig. 2). These sensors operate in conjunction with one another to provide the BMW vehicle with a full 360-degree view of its surroundings and the perceived environment. Then it’s cross-referenced to a high-definition map to provide certainty of the vehicle’s position on the roadway. 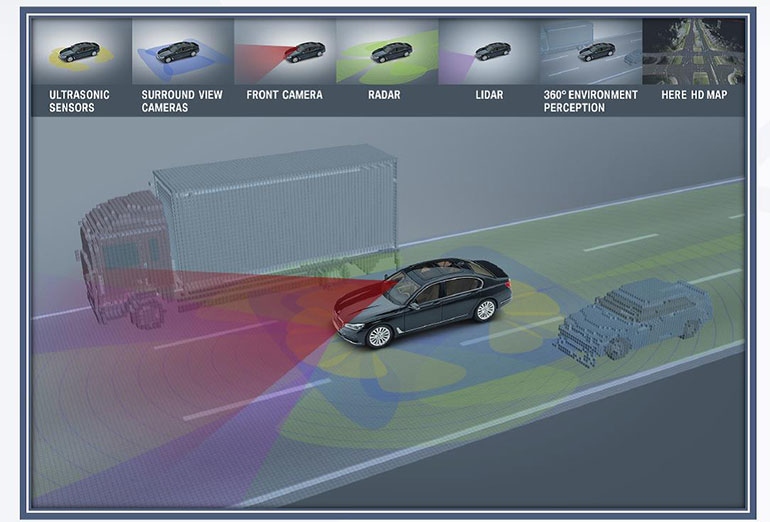 2. A variety of sensors will be used to achieve SAE Level 3 automation. (Source: BMW)

This perception also includes the identification of other vehicles and potential road hazards, all classified by the BMW vehicle’s onboard processing, which can classify people, cars, various objects, and potentially hazardous situations. As the vehicle’s environment is sensed and classified, the appropriate next steps are planned, using the information from the sensors as input. The BMW vehicle then follows this planned path. All of this sensing, planning, and acting occur in fractions of a second and occur continuously, creating a continuous feedback loop for a safe, seamless driving experience.

To handle LiDAR and computer vision technology, BMW entered into a partnership with Israeli startup Innoviz to enable its Level 3-5 autonomous vehicles to “see” their surroundings by creating a 3D point cloud that represents its environment. In addition to LiDAR sensors, Innoviz brings object detection (people, cars, trucks, bikes, lane markings), tracking, classification and other functionality to BMW.

The Munich-based automaker plans to integrate Innoviz’s technologies into the Intel-Mobileye platform for the purposes of testing and mass production. BMW has already been working with Intel and Mobileye to develop autonomous driving platforms.

Before releasing the SAE Level 3 BMW ADS to customers, the company reported to NHTSA that it will have completed studies to demonstrate that the system can be handled safely by the driver (e.g., activation, deactivation, and takeover requests).

In addition, the BMW Group’s development fleet has been driving “millions of miles worldwide,” gathering petabytes of vehicle data (and reference data) in data storage centers that are used for development and validation testing. This activity is also taking place in North America to ensure that cases specific to U.S. operation are considered during development.