The opposite is true for remote wireless applications, particularly those connected to the industrial Internet of Things (IIoT) that experience prolonged exposure to extreme temperatures. These applications demand the use of robust, long-life, industrial-grade lithium batteries that can achieve extended battery life to reduce the total cost of ownership.

Some harsh environments are typical to remote locations, such as sweltering deserts, the Arctics, and pressurized undersea environments. However, extreme temperatures can also occur in more commonplace applications like automotive windshields, where the battery must perform reliably despite the severe temperature cycles that characterize car interiors.

That application requires the use of bobbin-type lithium-thionyl-chloride (LiSOCl2) cells, uniquely designed to handle heat soak, which can rise to 113°C (according to SAE) when parked, then rapidly cool to room temperature (see table). In cold weather, the opposite occurs: the battery must endure cold soak followed by a rapid rise in temperature.

This example illustrates how prolonged exposure to extreme temperatures can negatively impact ordinary batteries due to frozen chemicals, voltage drops, and accelerated self-discharge: environmental challenges that limit the choice of battery. 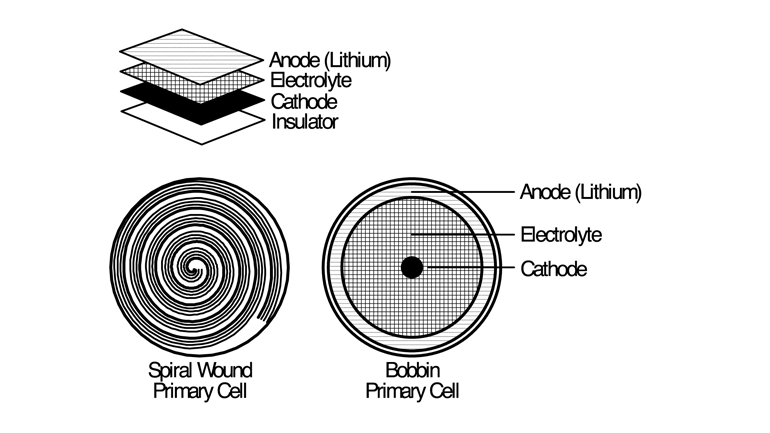 1. Cells are typically implemented as a spiral-wound or bobbin-oriented configuration.

If the device draws average current measurable in milliamps, enough to prematurely exhaust a primary lithium battery, then it may call for some form of energy-harvesting device coupled with an industrial-grade, rechargeable Li-ion cell. Photovoltaic (PV) panels are the most common type of energy-harvesting device. However, certain niche applications also draw small amounts of current from equipment movement, vibration, temperature variances, and ambient RF/EM signals. Real-life examples are highlighted later in this article.

Every Remote Wireless Application is Unique

There are no one-size-fits-all solutions for battery-powered devices, as numerous factors affect the choice of battery chemistry. These variables include the amount of current consumed during active mode (including the size, duration, and frequency of pulses); energy consumed during “standby” mode (the base current); storage time (as normal self-discharge during storage diminishes capacity); thermal environments (including storage and in-field operation); and equipment cutoff voltage, which drops as cell capacity is exhausted or during prolonged exposure to extreme temperatures. Perhaps most critical is the annual self-discharge rate of the cell, which often exceeds the actual amount of energy consumed annually by the device.

As the lightest non-gaseous metal, with a high intrinsic negative potential that exceeds all others, lithium offers unique performance characteristics. They include the highest specific energy (energy per unit weight) and energy density (energy per unit volume) of all commercially available chemistries. Lithium cells operate within a normal operating current voltage (OCV) ranging from 2.7 to 3.6 V. Lithium chemistries are also non-aqueous, thus less likely to freeze in extreme cold.

If an ultra-long-life battery is required, the preferred choice is LiSOCl2 chemistry. These batteries can be constructed in two ways—bobbin-type or spirally wound.

Battery self-discharge is ubiquitous, affecting all cells, including those that are disconnected. This naturally occurring phenomenon is mainly influenced by the passivation effect.

Passivation develops when a thin film of lithium chloride (LiCl) forms on the surface of the lithium anode, creating a temporary separation between the anode and the cathode, reducing the chemical reactions that cause self-discharge. Whenever a current load is placed on the cell, the passivation layer offers initial high resistance, causing a temporary drop in voltage until the discharge reaction begins to dissipate the passivation layer. This process keeps repeating every time the load is removed.

While passivation is extremely useful for minimizing battery self-discharge, too much of it can be problematic by blocking energy flow. The test of a battery manufacturer is to effectively control passivation to strike the ideal balance between energy flow and self-discharge.

Design engineers need to be fully aware that a battery’s actual self-discharge may take years to become fully measurable, and theoretical test data tends to be far less reliable than actual in-field data. So thorough due diligence is required when evaluating competing battery suppliers.

The Increasing Need for High Pulses in Two-Way Wireless Connectivity

Unfortunately, despite their incredible longevity, standard bobbin-type LiSOCl2 cells aren’t well-suited for delivering high pulses. However, that challenge can be easily overcome by adding a patented hybrid layer capacitor (HLC). The bobbin-type LiSOCl2 cell serves to deliver low-power background current while the HLC acts like a rechargeable battery to store pulses of up to 15 A. The patented HLC also features a unique end-of-life voltage plateau that can be interpreted and then programmed to deliver “low battery” status alerts.

Below are some representative examples of applications in harsh environments that often benefit from the use of long-life bobbin-type LiSOCl2 batteries:

To solve the problem of transporting large, bulky scientific equipment across the Artic, Oceantronics redesigned the battery pack for its GPS/ice buoy. It replaced an oversized battery pack made up of 380 alkaline D cells with a far smaller, lighter, and more cost-efficient solution using 32 high-energy-density bobbin-type LiSOCl2 cells and 4 HLCs (Fig. 2). 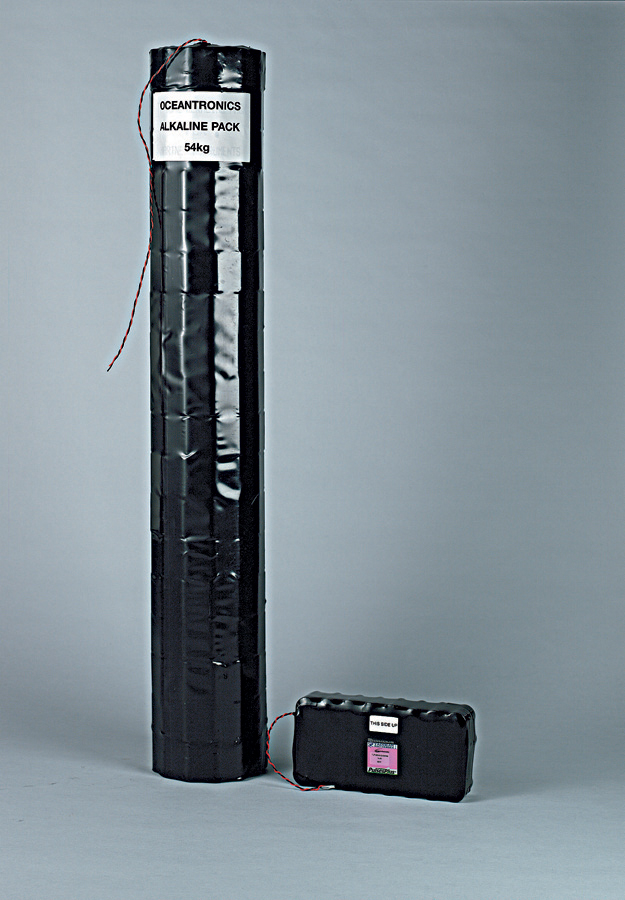 By achieving a 90%+ reduction in size and weight (54 kg down to 3.2 kg), the redesigned battery pack was far easier to transport to icebergs located near the North Pole via helicopter. In addition, converting from alkaline to bobbin-type LiSOCl2 chemistry multiplied potential battery life many times over.

Minimizing size and weight is a major concern for utility line crews climbing up and down tall towers to install line/connector sensors that monitor the status of electric power transmission lines, including temperature, catenary, and line current. Southwire chose bobbin-type LiSOCl2 batteries to enable the collection and aggregation of data that’s transmitted via cellular network to warn a utility if a transmission line goes down.

Use of a bobbin-type LiSOCl2 battery enables the line/connector sensor to be more compact and lightweight (3.5 lbs.), providing easier portability in extreme temperatures (−40 to 50°C). These batteries also deliver the high energy density and high capacity required to provide 45+ days of backup power in case no line current is detected (Fig. 3). 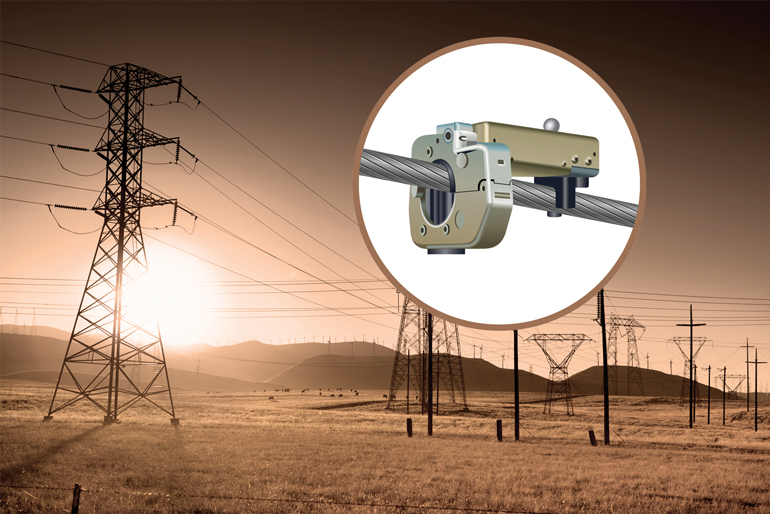 3. Bobbin-type LiSOCl2 cells reduce the size and weight of Southwire’s line/connector sensors that monitor the temperature, catenary cables, and line current of electric power to warn the utility if power transmission lines go down. (Courtesy of Southwire)

Beneath glaciers in Greenland and Antarctica lay water channels up to 2.5 km deep. Researchers are using wirelessly connected sensors to measure how climate change and rising sea levels are impacting these deep-water channels.

To support this research, the “Cryoegg” was developed by Cardiff University. This innovative device measures and transmits data regarding temperature, pressure, and electrical connectivity via underwater radio signals, eliminating the need for bulky and expensive cables that can become broken or disabled by glacial movement. Bobbin-type LiSOCl2 cells were chosen for their high capacity and energy density, extended temperature range, and ability to generate periodic high pulses to transmit data twice each day for approximately two years (Fig. 4).

4. Bobbin-type LiSOCl2 batteries feature higher capacity and energy density, an annual self-discharge rate as low as 0.7% per year to permit up to 40-year battery life, and the widest possible temperature range (−80 to 125°C).

As previously noted, certain wireless applications that draw milliamps of current may demand the use of an energy-harvesting device in combination with Li-ion rechargeable batteries.

Consumer-grade rechargeable Li-ion cells are too short-lived for most industrial-grade applications, with a limited operating life of five years and 500 recharge cycles, restricted to use in moderate temperatures (0 to 40°C). Consumer Li-ion rechargeable batteries are also unable to deliver the high pulses required for two-way wireless communications.

By contrast, industrial-grade Li-ion batteries can operate for up to 20 years and 10,000 full recharge cycles at an expanded temperature range (−40 to 85°C), along with the ability to deliver periodic high pulses to power two-way wireless communications.

Solar-powered devices require PV panels and rechargeable batteries large enough to power the device for five to seven days in case there’s no sunshine. While this scenario may rarely occur, the power supply must be overdesigned to cover any shortfall. Incorporating a primary LiSOCl2 cell can create a backup solution for charging the Li-ion cell to compensate for a prolonged period of no sunshine. This backup solution permits the use of a smaller PV panel and fewer or smaller Li-ion batteries, thus saving money while aiding in product miniaturization.

Rapid expansion of the IIoT is creating dynamic opportunities for industrial-grade, long-life primary and rechargeable Li-ion batteries that improve product reliability and reduce the total cost of ownership. If your application requires a battery that can last as long as your device, then do your due diligence and challenge potential battery suppliers to supply well-documented long-term test results, comprehensive in-field performance data (under similar conditions), and numerous customer references.

Sol Jacobs is VP and General Manager of Tadiran Batteries.