A tricky problem for manufacturers interested in benefiting from artificial intelligence is knowing where to start the adoption and how to scale up deployment.

For vision AI software company Neurala, Inc., the launching point for manufacturers may very well be at the site of the product line. The Boston-based company recently introduced its VIA (vision inspection automation) software, which enables manufacturers that have not worked with AI before to train and use vision AI to identify defects in products or packaging on the production line.

“We’re really trying to create a scalable software product that allows you to do those functions remotely,” said Heather Ames Versace, Neurala’s co-founder and COO. “Part of our DNA is that, whatever we develop as a software solution, it doesn’t have a dependency on making massive capital purchases, as well as making it scalable.”

One way in which Neurala substantiates this claim is by ensuring customers can set up their systems with off-the-shelf components. The VIA software appeals to manufacturers reluctant to rely on connectivity to the cloud, Ames Versace explained, as it allows a particular facility to keep data on the factory site without the privacy or lag time concerns typically associated with cloud deployments. 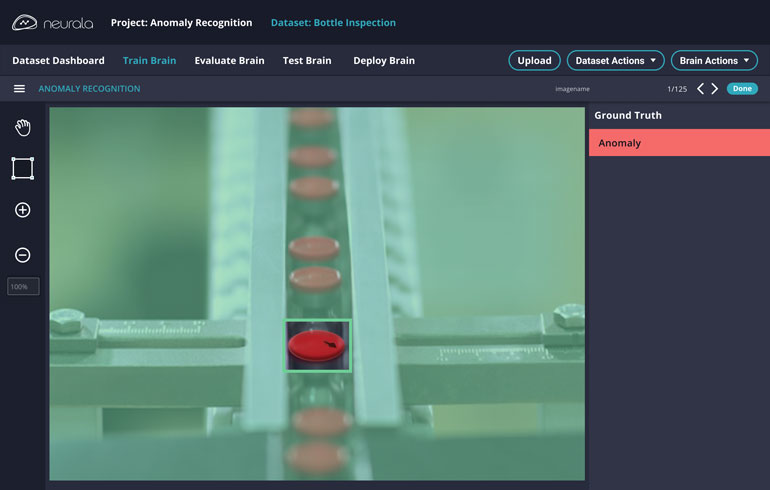 Take as an example a commercial bakery where inspections are typically done by hand, and where one in 100 trays might be pulled off the line for inspection. The challenges are that these inspections require a full-time person and consistency must be maintained when a different employee is assigned to the same task. But, in keeping with the times to have fewer people on the floor as a way to meet hygiene guidelines, Neurala’s inspections technology can be performed without human intervention while increasing uptime.

“When baked goods come out of the oven on the conveyor, they need to be inspected for such criteria as color, shape and whether ingredients or toppings were distributed evenly,” said Ames Versace, adding that while inspecting baked goods can be a subjective assessment, the process is integral to maintaining brand equity.

Neurala’s automated quality inspection software catches defects early and has the ability to train and operate multiple AI models. The VIA software is compatible with GigE cameras that can view baking trays before baking and after exiting the oven. In a recent use case, a bakery that used Ethernet/IP communication required a gateway to transfer the Modbus TCP communication to Ethernet/IP to talk to the PLCs.

This solution is adaptive and allows the operator to refine decision-making. “It’s a constant learning situation where both subjective measurements are now supplemented with an AI tool,” said Ames Versace. The bakery’s resulting productivity improvements included higher throughput, lower waste costs and fewer staff, although bottom-line results differ by industry.

In another example, a manufacturer of plastic molding parts for the electronics assembly had minimal knowledge of machine vision but needed to rapidly increase quality inspection protocols. Installing a GigE camera on the assembly line to inspect the parts after deburring allowed an “inspector”—an interface between a Modbus TCP and OPC UA to the PLC—to signal defects. A human operator would then inspect the defective part and determine whether it should be scrapped or reworked.

According to Neurala, the benefit of using AI to increase uniformity and anomaly recognition, in addition to human inspection, is that it has the potential to ramp up production of products that have stronger quality control requirements, as well as providing the impetus for a higher mix of products.