Armoring a Valve Against Molten Salt

Engineers at Sandia National Laboratory are working on designs for next-generation solar plants that capture solar energy by heating and liquifying chloride salt, which then gets stored and transferred to a generating plant where it is used to create electricity. One aspect of the project involves making valves that can safely and reliably control the flow of the corrosive, molten salt, which can reach temperatures in excess of 1,400°F (750°C).

Even though it is extremely corrosive, molten salt is the preferred liquid for delivering and storing liquid energy because it retains its viscosity, as opposed to water, which turns into steam at such high temperatures. Molten salt also maintains a more consistent temperature as it flows throughout the power plant collecting and delivering energy.

Another challenge in building better valves is the continually changing temperatures, pressures and flow rates during operations, not to mention outside temperatures than dip extremely low in the winter. Valves freezing and thawing due to weather makes them expand and contract, which can weaken the valve. The valves must also maintain constant heat transfer and fluid flow, despite changes in outside temperatures and operational tempo.

The overall goal of the project is to have a feasible plant design that will bring solar power down to five cents per kilowatt hour. To do so, the engineers must design the valves to handle much higher temperatures than current molten-salt solar plants. If successful, the redesigned valves could be used for energy transfer in nuclear plants and petrochemical factories.

The Sandia team is also adding shapes and trim inside the valve’s piping to buffer pressure surges and pulses created as the molten salt passes through; they also dissipate heat to prevent valve damage. The team also reformulated packing materials to create a modular quick-change method for replacing bellow seals, which can be destroyed if activated in the presence of frozen salt. 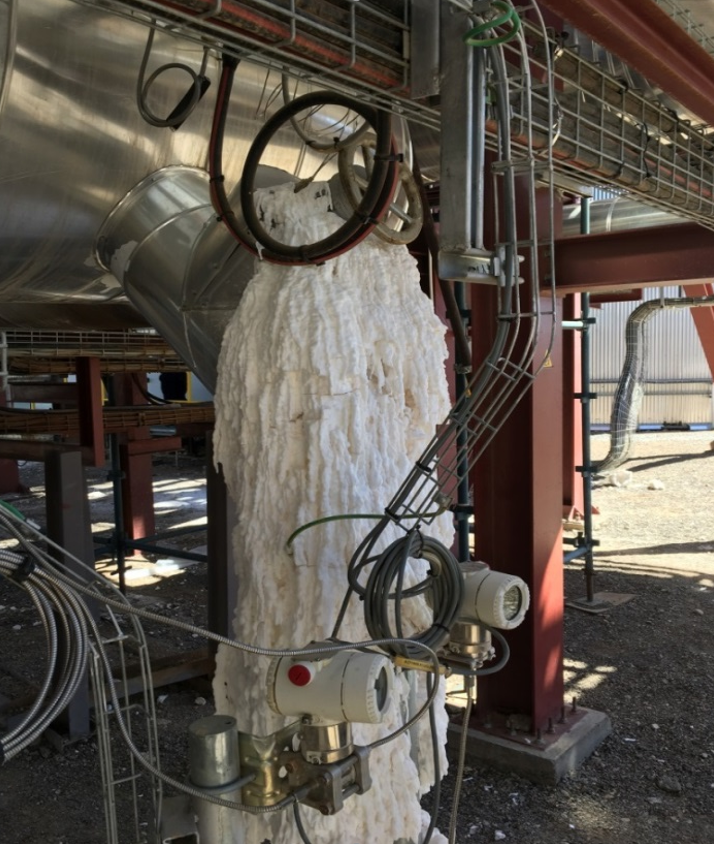 Sandia National Laboratories is trying to boost the efficiency of concentrating solar power systems and upgrading the valves for higher temperatures is a critical part of the project. Mishandling the thermal management of the molten salt could damage valve bellows or packing damage, which can lead to valve failure.Ken Armijo

Freezing salt due to winter temperatures can put mechanical stress on valve stems, seals and bonnets. So the team added a heat-transfer component within the valve that carries heat through the valve stem to the packing area. This keeps the valve’s internal temperature stable and reduces maintenance costs.

The advanced valve also will have innovative gaskets, seals and packing that further reduce maintenance. In addition, it could also be equipped with pressure and flow sensors which would lower the cost of adding them later.

The new design will potentially be online by 2030, helping  to lower the levelized cost of solar-based electricity—the cost of the plant divided by its lifetime energy output—which has become increasingly competitive for developers to win solar projects.