Are Metal Conveyor Belts Right for Your Application?

Conveyor belts date back to the end of the 18th Century, when they were hand-operated and made from leather belts and wooden beds. Over the years, technological advances have introduced new power sources such as steam and electricity, and new materials to belt design. Belt materials have included rubber, PVC, nylon, cotton, polyester and metal, among others.

Here’s a look at metal belts, their features and benefits, advantages and disadvantages, and whether or not they’re right for your engineering or design application.

Here are some of the notable features of metal belts:

High strength-to-weight ratios. Stainless steel has a tensile strength ranging from of 180 to 300 KPSI, depending on the alloy and temper chosen. Relatively thin and light-weight belts can be designed to handle the stresses of almost any application. Accordingly, metal belts are strong contenders in countless applications where strength, light weight or both are needed during production. The high strength and low weight let more of the conveyor’s input horsepower be devoted to moving the product and not the belt, which boosts efficiency and reduces operating expenses.

Metal belts on conveyors are used in a wide range of high-end manufacturing applications such as robotics, food processing and solar panel production.

One common customization option are perforations. They can be created on metal belts by mechanical and laser cutting, die-and-cut presses and rotary-pinned perforation rollers.

Vacuum perforations, for example, let air be pulled through holes in the conveyor by a vacuum plenum beneath it. This creates a suction force that firmly holds items and materials on the belt and in position and removes dust from the belt.

Custom perforations vary by manufacturer. Endless metal belt maker Belt Technologies, Inc., for example, can perforate belts as thin as 0.002 in., as narrow as 0.040 in. and as wide as 36 in.

Metal belts can also be customized with coatings and surface treatments. Teflon, neoprene and silicon are the most common coatings. They can add nonstick qualities, improve lubricity, increase friction and change the belt surface’s hardness (durometer). 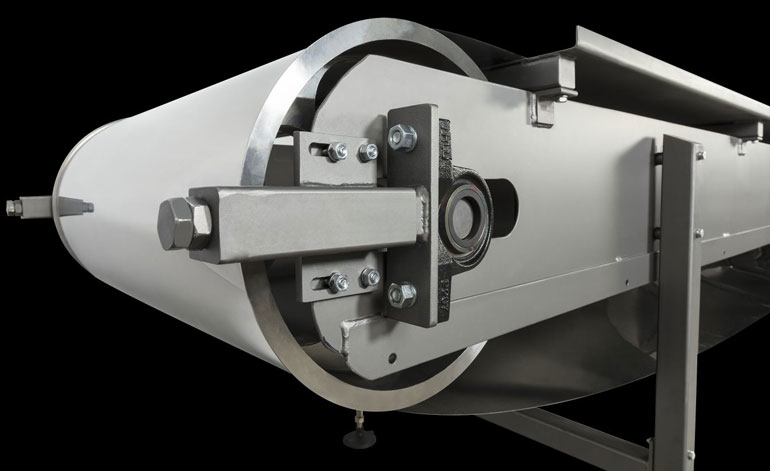 The high strength and low weight of stainless-steel belts let more of the conveyor’s input horsepower be devoted to moving the product and not the belt. This boosts efficiency and reduces operating costs.

The nonstick qualities of Teflon coating, for example, benefits food processors. And silicone helps ensure small components remain on the moving belt during manufacturing. Depending on the application method, surface coatings can be as thin as 0.0005 in.

Materials. Designers have a range of metals to choose from, depending on the manufacturer. For example, belts can be made from an array of stainless steel alloys, as well as Inconel (a nickel-chromium-based superalloy), Invar (a nickel-iron alloy) and titanium alloys. Engineers can choose metals that give belts greater corrosion or temperature resistance or have higher tensile and yield strength.

Pitch accuracy. Metal belts can be fabricated with a pitch accuracy of +0.0005 in. (the gap between perforations, timing pins or other such features). This improves accuracy and repeatability, which is useful when designing indexing, positioning and processing equipment.

Lubrication. Unlike chain-links belts, metal belts are a single element, and don’t generate any friction that calls for lubrication. This reduces maintenance while improving cleanliness and reliability.

Smooth operation. When non-metal belts transition from being flat to wrapped around a sprocket, it can cause pulsing motion in the drive chain, along with localized lowering and rising of the chain at the sprocket. Metal belts are free from this pulsation, so motion is smooth and matches the control system’s motion profile. 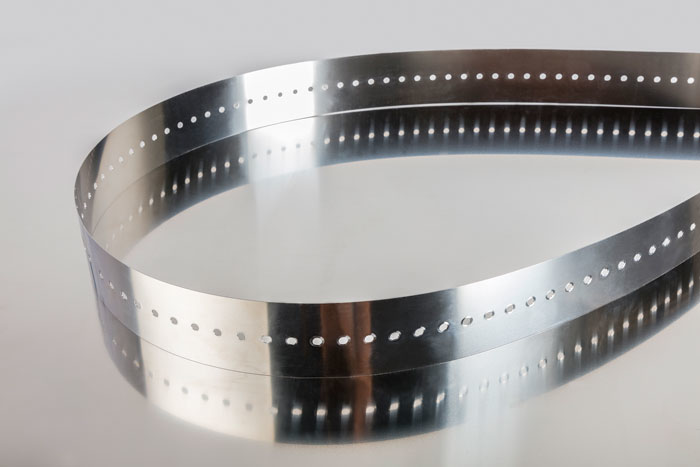 Metal timing belts and drive tapes are like conveyor belts, but they work with specialized timing pulleys to ensure precise, cyclical movement of parts and products.

Thermal conductivity. Metal belts are better at absorbing and transmitting energy in the form of heat, cold and electricity, which is often used in the manufacturing process. Many materials must be kept at specific temperatures as they move down the conveyor to improve finished product’s quality and consistency. Stainless-steel belts with high thermal conductivity are well-suited for transporting food items that cook food as they move through production.

No static build-up. Because metal belts discharge static electricity, they’re ideal for use in making electronic components such as integrated circuits and surface-mount devices.

Cleanliness. Unlike belts with teeth or grooves, or flat neoprene belts, metal belts don’t generate dust or particulates that could spoil or corrupt food or pharmaceutical products. This also makes them well suited for clean rooms. Additionally, metal belts will survive being sterilized in an autoclave.

Unlike materials that call for the belts to be removed from the conveyor for regular cleaning, which interrupts production, metal belts can be cleaned in place.

Durability. Metal belts are inert and non-absorbent, so they resist humidity, corrosion and harsh chemicals. Stainless steel’s nonporous surface resists damage, a benefit for applications where food bacteria or other germs could proliferate in grooves, marks or scratches.

Due to their resistance to extreme heat, metal belts won’t melt or break during high-temperature processes, but they could see minimal warping. They also withstand temperature changes, making them good for bakery products, packaging and other high-temperature applications.

The alloy used in the belt determine the range of high temperatures it can withstand. One heat-treated stainless-steel alloy, for example, survives up to 800°F, while a type of Inconel handles up to 1,000°F.

Metal belts are inherently flame-resistant, a notable benefit for some food processors. In the 2000s, several such processors had their plastic conveyor belts catching fire. It caused millions of dollars in damages and, in some cases, closed the facilities.

Sustainability. Metal belts make less of an impact on the environment than plastic belts. Though all conveyor belts have a carbon footprint, plastic, made from petroleum, is tougher on the planet.

Cost-effectiveness. Due to its longer life and lower cleaning and maintenance requirements, metal belts can be the more cost-effective option over its lifespan. 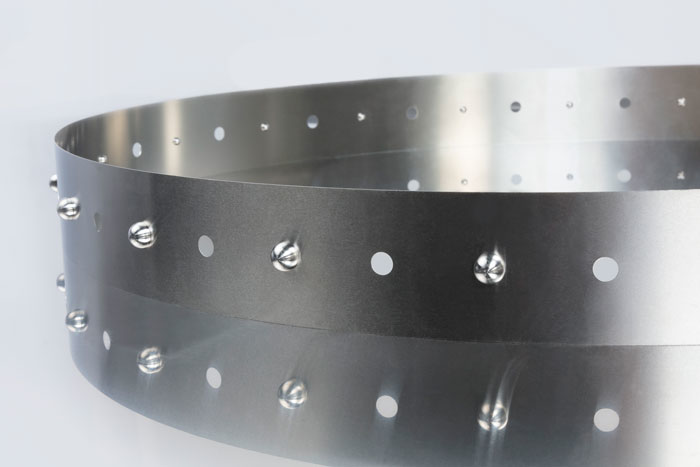 Perforated timing belts are best used for timing applications; they engage timing teeth on a pulley.

Metal timing belts and drive tapes are like conveyor belts and can be made from the same high-quality stainless steel. But they’re designed to work with specialized timing pulleys to ensure precise, cyclical movement of parts and products.

Metal timing belts. Perforated timing belts for timing applications engage timing teeth on a pulley. They can also have tooth-like attachments that engage sockets in the pulley’s outer circumference. In both cases, the timing elements ensure the pulley and belt are synchronized. The belt moves by frictional forces created between the belt and turning pulley.

Because metal belts don’t stretch, they can typically ensure a repeatability tolerance between 0.002 in. (0.051 mm) and 0.005 in. (0.127 mm). (Repeatability is the ability of a single pitch to return to its home position after several revolutions of the belt.) In a standard friction drive, the pulley moves slightly faster than the belt. Unchecked, this can lead to pitch accumulation or belt creep, which degrades accuracy.

Timing belts and timing pulleys control the effects of belt creep, making stainless steel an ideal way to maintaining accuracy when precision is a must. 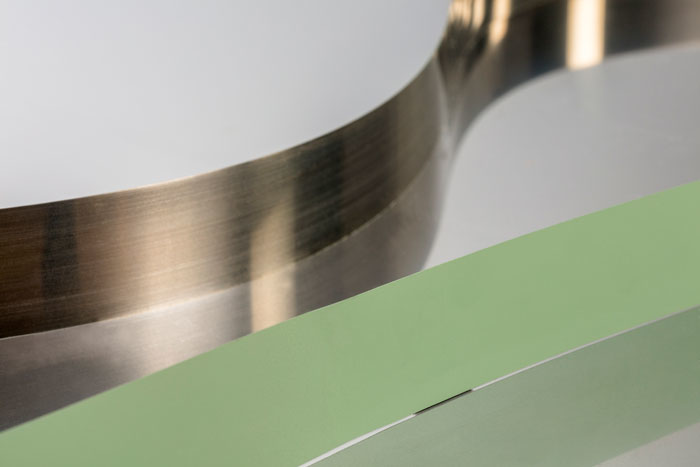 Metal belts can be customized with coatings and surface treatments including Teflon, neoprene and silicon. These coatings can add non-stick qualities, improve lubricity, increase friction or even change the belt surface’s hardness.

Metal drive tapes. Although metal drive tapes ae made from the same stainless steel as metal belts, they’re open-ended and anchored at each end. They are used when reliable and accurate motion profiles are needed, such as in XY plotting assemblies for 3D printers and robotic equipment.

Metal drive tapes are ideal for use in robots. Their low mass and high strength offer durability, along with quick acceleration and stopping. With other timing devices, motion loss and backlash of gears and timing belts can lead to inaccurate positioning and robot motion. Metal drive tapes can perform with near-zero backlash in various applications, including:

Metal drive tapes can be customized with a nearly unlimited selection of end attachments and/or perforation patterns. They can be found in robotic arm actuators, semiconductor and electronics packaging, industrial automation, medical and surgical applications, and animatronics and robotics for the entertainment industry.

Metal drive tapes can also be deployed with several belts with tight tolerances to increase a robots’ operational lifespan and allows for repeatability when making mass batches of products. 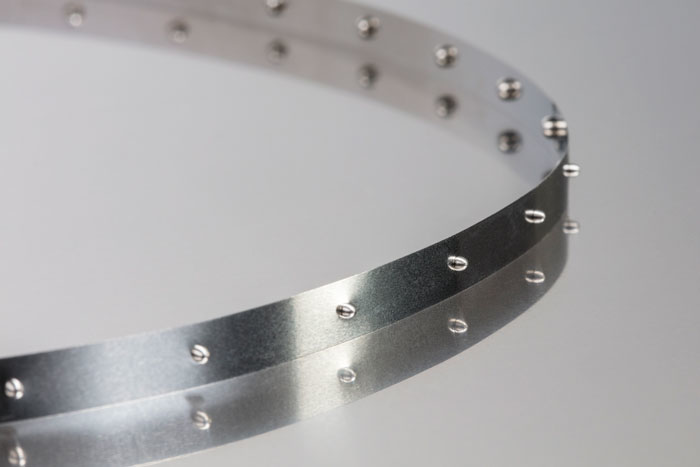 Metal drive tapes are made from the same stainless steel as metal belts but are open-ended and anchored at each end.

Every conveyor belt system has its disadvantages. Fabric belts are prone to belt creep. Plastic mesh belts contain small parts that can break off and fall into and contaminate the production lines. Metal belts do well in these areas, but have their own drawbacks.

Though their durability, sanitary and ease-of-cleaning features means that metal belts will have a lower cost over the course of their lifetime, the initial cost of metal belts is often higher than other systems, which can be a challenge for some budgets.

Metal belts can also be deformed beyond repair if they suffer unexpected major impacts or are used improperly. Protecting metal belts from these scenarios lead to longer lifespans and higher production rates.

Certain perforations on metal belts can weaken the metal’s structural integrity, which shortens the belt’s lifespan and results in additional replacement cost and downtime.

A Short History of Metal Belts

The first steel conveyor systems were invented and produced in 1901 and became widely used in food production. A little later in that century, Henry Ford popularized conveyors, incorporating them into his auto assembly lines. Rubber shortages during WWII led to the invention of synthetic conveyor belts.

Decades later, rapid growth in America’s post-war economy led to the increased use of steel belts in manufacturing. Early applications included productions for NASA and the tobacco industry.

The food processing industry is vulnerable to product recalls, often due to bacterial contaminants that spread through poorly inspected products or because of contamination due to dirty processing equipment. A recall due to contamination can prove devastating, both financially and to a company’s reputation.

Plastic and rubber belts are susceptible to fraying and generating particulates that can fall into the food. They are also prone to physical damage, including pits and cracks where chemicals, allergens or contagions can build up and fester. And plastic and rubber belts outgas (emit fumes), which can affect the food’s flavor. 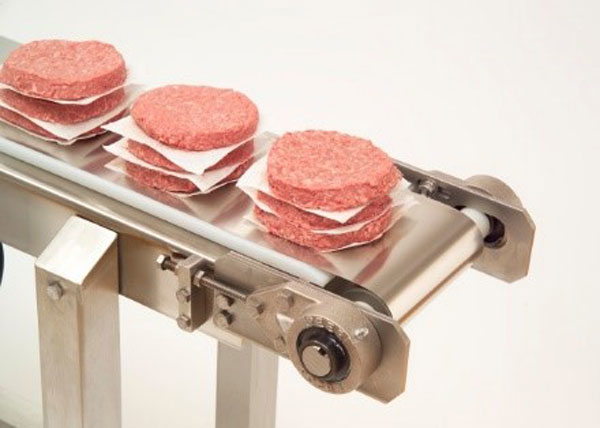 Metal belts are a sound choice for the food processing industry. Stainless steel belts and conveyors have hygienic surfaces that are sanitary, easy to clean, and resist bacteria, rust, and corrosion. Most importantly, the stainless-steel designs meet and exceed FDA regulations and guidelines for food manufacturers.

In comparison, solid stainless-steel belts and conveyors have hygienic surfaces that are more sanitary and do not affect food quality. Stainless steel resists rust and corrosion and can be cleaned easily and thoroughly with inexpensive chlorine, high-pressure steam or most other washing methods. Because metal belts contain fewer moving parts than mesh and other belts, there’s a much lower chance that parts or particulates will break off the belt and contaminate the food supply.

Unlike plastic and rubber, steel does not absorb odors and its surface resists bacteria like salmonella and listeria that can cause cross-contamination.

Most importantly, the stainless-steel designs meet and exceed FDA regulations and guidelines for food manufacturers. From meats to frozen pizzas and ice cream, stainless steel metal belts are ideal for the cooking, freezing and handling edible products. They have proven to be versatile, durable, and easy to design and manufacture for any food processing system requiring exceptional results.

Denis Gagnon is CEO and Alan Wosky is president of Belt Technologies Inc. in Agawam, Mass. Contact them at  https://www.belttechnologies.com/.