Chinese EV manufacturer Aiways revealed further details of its 63-kWh battery pack, a multilayered “sandwich” battery pack that allows for a greater specific capacity of cells per kg while still ensuring adequate cooling and protection from damage. The company also announced it has been granted seven patents across Europe and China that cover its autonomous mobile charging robot CARL.

The battery pack consists of a system of rechargeable cells comprised of cooling and insulating boards (Fig. 1). The battery pack’s energy density is 181 Wh/kg. An isolation plate between the battery module and the cooling plate provides additional insulation, reducing the rate of heat transfer between the external environment and the battery module. Separating the dry and wet areas of the cell with a physical barrier (the entering refrigerant is in a dry part of the cells) negates the risk of coolant leakage—a cause of more than 80% of battery safety incidents—even after substantial impact.

1. Separating the dry and wet areas of the EV battery cell with a physical barrier negates the risk of coolant leakage. (Source: Aiways)

The battery pack powers a proprietary 140-kW electric motor (front-wheel drive, maximum 16,000 rpm), which is 15% smaller than rival systems. It can be utilized on a variety of body styles from the A-segment through to large SUVs.

Aiways boasts that the battery pack has undergone 580 rigorous tests, far more than the 51 tests required by the Chinese national standard. To ensure the safety and reliability of the battery pack, tests have covered electrical, chemical, and physical elements, including short-circuit tests, extreme heat and frost tests, and starting the battery at high and low temperatures.

Winter testing last year on a 15,000-km (9,320 miles) engineering drive from China to Germany revealed that the Altech U5 all-electric SUV, using the sandwich-style battery pack, was able to achieve a range of close to 300 km at an ambient temperature of below 0°C. Using the WLTP (Worldwide Harmonised Light Vehicle Test Procedure) test, the 1,700-1,750 kg curb weight U5 is capable of delivering enough charge to cover more than 400 km.

Aiways also disclosed that it has been granted seven patents across Europe and China, covering its autonomous mobile charging robot CARL, including the intelligent robot design and charging method.

The idea of CARL is simple: Just park your EV and summon the charging robot using a smartphone app (Fig. 2). The CARL robot can locate the vehicle via GPS data, motor its way to the EV, recognize the charging standard used, and start recharging the battery from its own mobile energy storage of 30 or 60 kWh without much input from the driver. CARL can recharge an EV battery to 80% in under 50 minutes. Once charging is complete, CARL can move on to the next EV or return to base to recharge its own battery. 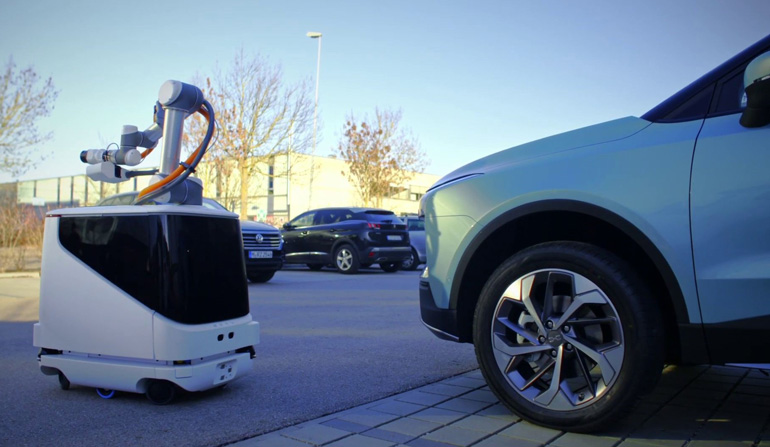 Volkswagen has a concept for an autonomous robot to charge EVs in public, too. VW’s totally autonomous machine also wanders around parking garages, parking lots and the like employing cameras, sensors and lasers. It brings a mobile charging pack, called the “battery wagon,” to EVs as needed. The robot can carry multiple battery wagons at once; each of them houses 25 kWh worth of energy. Thanks to dc fast charging, the cars can receive up to 50 kW.

The U5 electric SUV is one of two Aiways EVs coming to market. U5 is a compact SUV. With a wheelbase of 2790 mm, the chassis provides sufficient space for various battery packs. Due to the flexible and unique MAS platform, it’s possible to fit powertrains with various capacities, as well as all-wheel drive.

To ensure it seamlessly integrates with the driver, the U5 uses face recognition to understand who is driving the car. Face recognition also allows the U5 to notice if the driver is getting drowsy, at which point it will send them an alert and suggest they stop for a break.

The U5’s biological monitoring system doesn’t just benefit the driver, it also enables Aiways’ AI-powered in-car childcare tool. Not only can the front passenger check on the children in the rear seats using the main infotainment display, it will alert them if the child drops a toy or a drink on the floor.

The U5 integrates with the driver’s smartphone, which they can use to access the vehicle, as well as pre-set heating controls and manage charging of the vehicle remotely.

Aiways’ U6 Ion, aimed at younger buyers in the popular crossover segment, utilizes the same aluminum-steel MAS (More Adaptable Structure) platform as the U5 (Fig. 3). The Aiways U6 combines a fastback-style roofline and features a bolder front end with L-shaped LED headlights and a sharper bumper incorporating a splitter (Fig. 4). 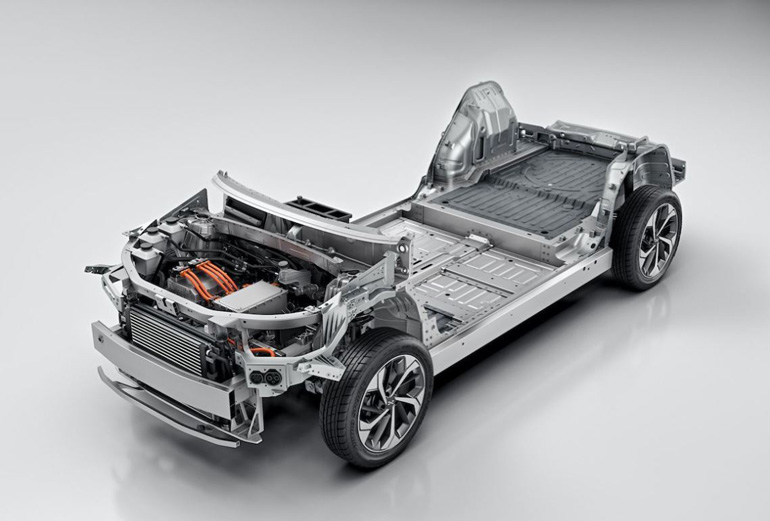 4. The upcoming U6 is an EV crossover featuring voice control of vehicle and entertainment features. (Source: Aiways)

On the tech front, Aiways’ U6 offers a 7-in. floating gauge cluster behind the steering wheel, a freestanding 14.6-in. touchscreen at the center of the dash, and a human machine interface with advanced voice recognition. The HMI can talk and listen to occupants and be used to control numerous vehicle and entertainment features, according to the company.

Production of the European version of U5 is scheduled for July, while first deliveries are set for August.