Aeroscreen Proves Its Worth at Indy 500

Making all-electric, mobile, off-highway equipment viable is a complicated engineering proposition. One of the key building blocks of such an approach is devising a way to recharge the vehicles’ batteries. Using a diesel generator doesn’t make sense when one of the overarching goals of the all-electric concept is to come up with a greener approach with a minimal carbon footprint.

When our company Envision Solar decided to tackle the challenge, building what we called the Electric Vehicle Autonomous Renewable Charger or EV ARC 2020, we identified two major issues. The first was making sure it would operate in all climates and conditions. The second was ensuring it would operate at maximum efficiency while remaining simple and reliable.

Here’s how we addressed these issues.

Engineering a mobile charger that operates in all climates, from the chill of winter in New York to the hottest afternoon in the desert of Nevada, is not trivial. It would have to work in extreme conditions and when there was no sunlight to energize the solar panels. That meant it would also have to store energy to use anytime, which leads to batteries and all the complex equipment needed to manage them, as well as the associated electronic for storing, inverting and delivering usable electricity to the vehicles and tools our customers used.

Batteries and the associated electronics operate most efficiently and safely within a specific range of temperatures we refer to as the Goldilocks Zone (not too hot, not too cold—just right). Fortunately, that range is broad, starting at 32℉ (0℃) and ending at just below 104℉ (40℃). Typically, the means to maintain any object at a somewhat constant temperature is to heat it when it’s too cold and cool it when it’s too hot. However, these energy-intensive processes would create an unacceptable parasitic draw on a limited source of electrical generation (solar power). Using all the energy generated from the solar array to maintain the Goldilocks Zone would make it impractical. We had to engineer a product that could passively regulate its own temperature.

The second law of thermodynamics and entropy were conveniently available to us. The question was how to leverage them to our benefit, when it was a benefit, and reduce their impacts when they worked against us. The second law of thermodynamics says hot objects are constantly getting cold (giving up heat energy and moving towards a state of entropy). This law is why ice cubes melt (as the ambient heat moves towards them) and hot soup cools (giving up heat to match ambient conditions). Keeping soup warm in a cold environment is simple; insulation does the trick. Thermoses are not intelligent, but they are good at slowing down the second law of thermodynamics. Cooling soup in a hot environment is quite a bit more complicated, as any child who has impatiently blown soup from their spoon onto the table can attest.

In the end, we combined three passive methods of cooling—convection, conduction and phase changing—to handle hot conditions. For the cold, we reduced airflow, added insulation and used the heat generated by EV ARC’s normal operations. All together, these methods let the charger operate anywhere in the U.S.

The next challenge we had to overcome was more basic and involved the fundamentals of solar power. It boils down to maximizing efficiency. There are two ways to do this: make the panels larger, or make them denser in terms of the number of power-producing cells per inch. Enlarging the solar panels was never an option because the EV ARC had to be mobile and fit in a single parking space. This meant we had to somehow increase the energy density, or at least the effective density of the solar array.

The time of day with the highest energy density is typically around noon (or thereabouts) when the sun is at its highest point in the sky. This lets photons hit the array as perpendicularly as possible, maximizing its production. To get more “noon,” we had to add solar tracking. It keeps the array properly aimed toward the sun during the as much of the day as possible. This, in effect, shifts noon and extends the window of maximum effectiveness.

There was already a great variety of tracking technologies on the market ranging from extremely basic to extraordinarily advanced. However, the more advanced the technology, the more complex it becomes. Just as in many fields of engineering, complexity increases the likelihood of failure and increased costs.

We also found out that photovoltaic cells are fairly insensitive to pointing accuracy. In fact, you get most production gains by keeping the modules within 20 deg. of pointing directly at the sun. Any more accuracy leads to significant increase in complexity, risk, and cost but only a marginal increase in electrical generation. 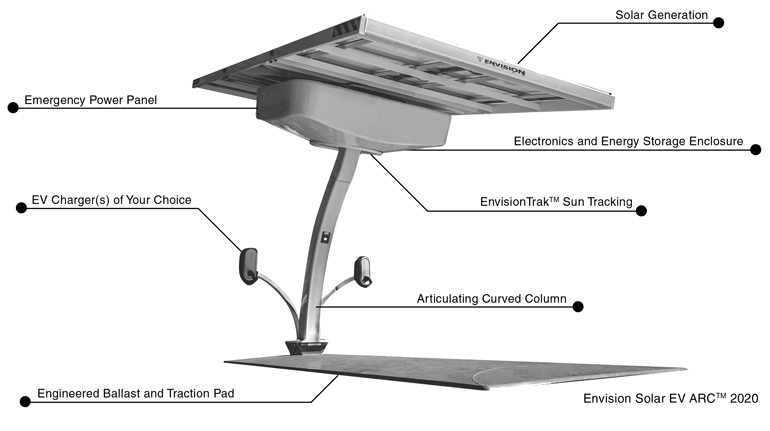 The EV ARC is self-contained and fits in a single parking space.Envision Solar

We soon settled on a simple and highly robust tracking solution that would provide almost all the gains with a far lower likelihood of failure. Our engineers devised simple but sufficient tracking algorithms to control the most reliable hardware in a patented EnvisionTrak solar tracker.

EnvisionTrak tilts the array to keep it aimed toward the sun. But rather than swinging or rolling the array, as is common with most tracking devices, we effectively bend the column atop which the array sits. This is vital for parking because while the column reorients the array, it constantly maintains the array’s alignment with the parking space no matter where the vehicle is pointed.

Swinging the array would have it encroaching on adjacent parking spaces, or worse, the driving lanes (which is illegal if it’s also a fire lane). The subsystem lets the panels generate 25% more electricity than a fixed array, and more electricity means miles driven or hours of equipment operation.

When it comes to transitioning to electrified construction equipment the biggest consideration isn’t the equipment’s capability, but rather, how to go about charging it.

In general, when a construction project is at the stage where dirt is being moved, there is no utility grid electricity at the site, or certainly not enough to fuel construction equipment. Using classic, stationary solar panels to charge equipment involves another construction project and would require more land or encroach on the job site. And most solar installations only work when connected to the grid and the sun is shining. There is no charging at night or during inclement weather.

The EV ARC requires little space (just a parking space worth) and no construction at all. It is delivered to site, ready to operate and gets moved to the next job site as soon as it is no longer needed at the first. Because it generates and stores all its own electricity, it can charge at any time—not just when the sun is shining.

Because EV ARC is mobile and will travel and be used in a wide variety of places, it had to comply with equipment regulations and structural codes in any jurisdiction…essentially everywhere. So, the array could not be too large, though it needed as many photocells as possible.

Making a large array from subassemblies was out because that added more complexity and longer set-up/takedown times. One solution is to fold the array up into a compact package for transportation. But folding structures usually aren’t strong and stiff enough to withstand harsh weather, particularly wind and snow when unfolded.

As any good engineer knows, the weakest part of any chain is its weakest link. In the case of folding arrays, that would be the hinges. They had to be as structurally sound as the array’s other structures.

The engineering team realized that the hinge only needed its highest structural integrity when the array was deployed. So, the team invented a hinge that is most stable in the locked-out position, meaning it’s at its strongest when it needs to be. When the array is packed for travel, the hinges play a small role as the array is supported by other elements. The array packed for travel can be easily unfolded and locked into place by a single operator.

Most solar arrays have gaps between the panels that let wind to pass freely through them while putting little strain on the array. For EV ARC, we didn’t have the luxury of devoting any of the array’s surface to gaps; we had to maximize every square inch while being confident it would withstand high winds.

Clamping, a commonly used technique for mounting modules in solar arrays use clamps in four places, but this creates point loading and can decrease the array’s structural integrity. EV ARC’s clamps span the entire length of each module, effectively creating a beam. The patented clamping, dubbed Envisimount, provides full-length support and increases the array’s structural integrity. The array has officially been cleared and independently rated to withstand winds of up to 120 mph. We also know it has withstood 185-mph, Category 5 hurricane force winds in the Caribbean.

It’s no secret that, whether it’s electric or not, heavy machinery requires serious energy to operate. Typical diesel-powered machines burn anywhere from 4 to 16 gallons of fuel per hour, depending on the type of machinery as well as how it is used.

The new generation of electric equipment is relatively small and only consumes 10 to 12 kWh per operating hour. This presents a couple of issues, one of which is the intermittent nature of the sun as a power source. Obviously, it’s not always shining, which means sunlight is not always available to charge equipment.

This presents the need for some way to power equipment when the sun isn’t out. For us, the intermediary is battery storage which we have on all our solar powered products. Storing solar power lets us take advantage of every photon that hits the array. 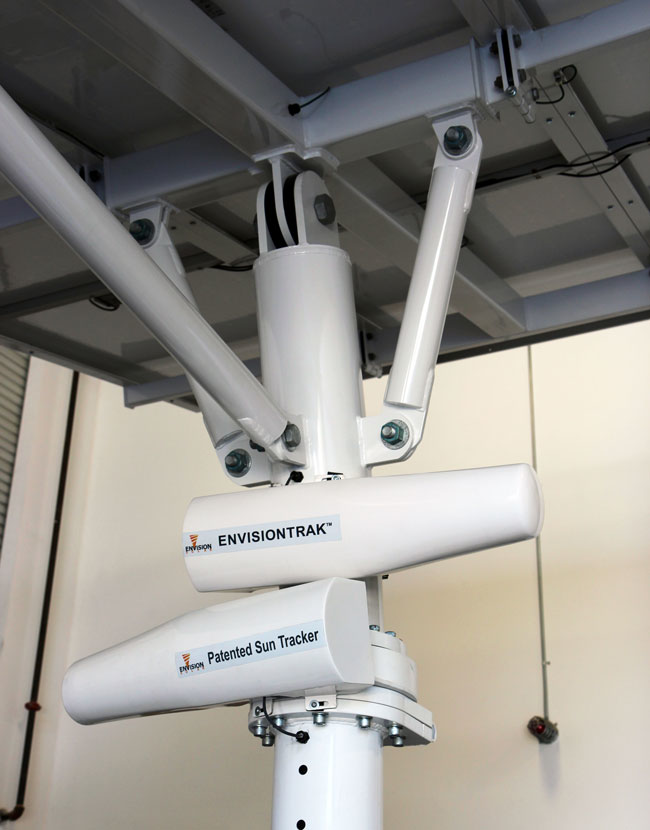 EnvisionTrac moves the array to that it faces the sun during most of the day.Envision Solar

It’s rare for a piece of heavy construction machinery to operate at full capacity for an entire eight-hour day. The duty cycle is usually intermittent. According to industry standard numbers, these machines typically operate at some fraction of full capacity for three to four hours, including idle time., There are outliers, of course, but understanding typical use is vital for developing charging equipment that will work for most real-world scenarios. Trying to supply energy for eight hours of maximum capacity would result in a significant over investment in the charging equipment needed for an all-electric fleet.

A typical small electric loader has roughly 40 kWh (kilowatt-hours) of battery storage capacity; an excavator of comparable size has roughly 20 kWh of storage. An EV ARC, which sells for an estimated $60,000, can store and generate enough electricity to maintain a loader for an entire construction job because equipment gets recharged at the end of every shift and taken back to full. In fact, construction crews don’t have to wait till the end of the shift. They can recharge it whenever it’s not being used.

A loader or an excavator as described that gets plugged in any time it is not used throughout the shift could always be ready to work with a full charge, or close to it. Three EV ARCs can power two excavators and two loaders. If more capacity is needed, more EV ARCs would be deployed.

Envision Solar is now working on a wireless charging device that eliminates the need to plug into the charger.

Desmond Wheatley is president and CEO of Envision Solar.