Additive Manufacturing and the Connected Plant

When Desktop Metal announced its intention to become a publicly listed company, the 3D printing industry perked up.

Only time can fill in the blanks of how companies were able to whittle through challenges posed by the pandemic, but the announcement called attention to the metal 3D printing company’s ability to compete with other industrial production processes at scale. The move marks a milestone in the growth of additive manufacturing (AM) and effectively raises Desktop Metal’s status as a veritable case study in how one company purported to barrel through the pandemic’s headwinds while also capitalizing on secular tailwinds that support reshoring of manufacturing and supply chain flexibility.

Here’s the deal: The Burlington, Mass. metal 3D printing company, which had already raised $430 million, signed a combination agreement with Trine Acquisition Corp., a special-purpose acquisition company, on Aug. 26. Once the deal is sealed in Q4 of 2020, the post-transaction equity value of up to $2.5 billion cements Desktop Metal’s unicorn status, cinching its position as a fully-fledged primary player in the additive manufacturing space. The industry has accelerated to 25% compound annual growth rate over the past three years and is expected to surge to $146 billion in 2030 from $12 billion in 2019. Desktop Metal’s shift in applications from prototyping and tooling to high-volume production of end-use parts ostensibly ushers in the next wave of mass manufacturing technology—what the company’s founders have dubbed “additive manufacturing 2.0.”

“As much as everyone wants to put a name on it—Industry 4.0 or the digital revolution in manufacturing—what we’re experiencing is this perfect storm of technologies that are coming into the manufacturing space through a lot of digital technologies,” explained Jonah Myerberg, co-founder and chief technology officer, Desktop Metal. “What 3D printing does is allow us to bring the designs in the digital space and the physical space closer together.”

When it comes to harnessing new sources of competitive advantage, AM is emerging as a resource of note. Its growing list of advantages are underpinned by variables that can make products more or less precise, more or less porous, or change the properties of products to make them lighter, stronger and faster to produce than traditionally manufactured counterparts.

If pundits have it right, AM technologies could result in more local production, provide manufacturers with design and software solutions and overhaul supply chains. Moreover, in times of stress, these capabilities bode well for AM companies that have shifted into clear view of strategists sifting through the pipeline of rising innovations.

Additive manufacturing is the catchall term for different types of 3D printing. Having ditched the reputation for producing tchotchkes and other homemade trinkets, AM has been embraced by metal manufacturers who are bringing it to the assembly line to lower production costs and lead times for a variety of metal parts, as well as for its potential to transform value chains.

Aerospace, automotive and medical sectors have used the technology to accelerate prototyping, explore new designs and create custom solutions that are lighter, cheaper and more efficient. With fewer parts involved in the manufacturing process, less material is wasted and assembly time is reduced.

Myerberg also characterizes AM as a digital process. “With one step you can take a digital part and you can print it into a physical part, and then you can test that physical part using FEA (finite element analysis) and CAE (computer-aided engineering), and break it virtually prior to manufacturing it physically,” he explained. “And you don’t have to make any investment in tooling. You can improve it on your CAD and predict the next one will be an improved part.

“When you look at digital manufacturing from that perspective, it’s all about continuous improvement,” Myerberg continued. “How do we make the process better or more stable? How do we take information that we’re collecting and feed it back into the machines to make the parts better?”

More recently, AM has gained a footing in de-risking strategies as factories opt to localize manufacturing production and sourcing and as manufacturers ramp up automation. “We talk about how the supply chains will be revolutionized and how 3D printing is going to consolidate manufacturing and allow us to reshore manufacturing here in the U.S. and in other countries,” said Myerberg. “That’s all true. But additive manufacturing will not be the right fit for every opportunity out there.

“It works in concert with many other technologies,” he added. “What the pandemic showed us is that companies and entities like hospitals need to think about their supply chain. They’re learning to ask which products they utilize most. Do they have a very stable supply of spare parts to keep those running? Where can they rely on being flexible in their supply chain? And are they going to be strapped?”

Myerberg points to Massachusetts General Hospital, which relied on European suppliers for ventilator parts. When the hospital faced shortages in April, suppliers were unable to deliver much-needed parts, he explained. Instead, the supplier was able to send CAD files directly to Desktop Metal to print the parts.

Whereas production at scale is typically viewed as a bane for AM, 3D technology came to the rescue to relieve a bottleneck for coronavirus testing by producing the sorely-needed nasal swabs, said Joshua M. Pearce, an academic engineer at Michigan Tech who is known for his work on open-source hardware and 3D printing. Conventional manufacturing methods that use injection molds are designed for maximum production volume. In an emergency, however, the process hits a snag because it lacks the flexibility and speed that’s needed to iterate.

Pearce noted that 3D printing can bridge this gap and produce at scale, provided the right material, right part files and right printers are available. One of the pandemic’s best examples is when Desktop Metal’s CEO and co-founder, Ric Fulop, along with a consortium of experts, were instrumental in activating a “distributed manufacturing” network to produce up to four million FDA registered, 3D-printed nasopharyngeal swabs per week to cope with demand.

What Desktop Metal Brings to the Table

According to Myerberg, Fulop recognized a demand for new metal 3D printing processes back in 2014. Back then, Myerberg was a designer of electro-chemical Li-ion cell systems and other high-performance energy systems for automotive and military applications at A123Systems, a company Fulop founded.

The pair kicked around ideas for new metal 3D printing processes and their ambition soon progressed to recruiting a team of six material scientists and engineers to co-found Desktop Metal in 2015. Among them were MIT professor Ely Sachs, the inventor of binder jetting technology, and John Hart, MIT associate professor of mechanical engineering and director of the Laboratory for Manufacturing and Productivity. 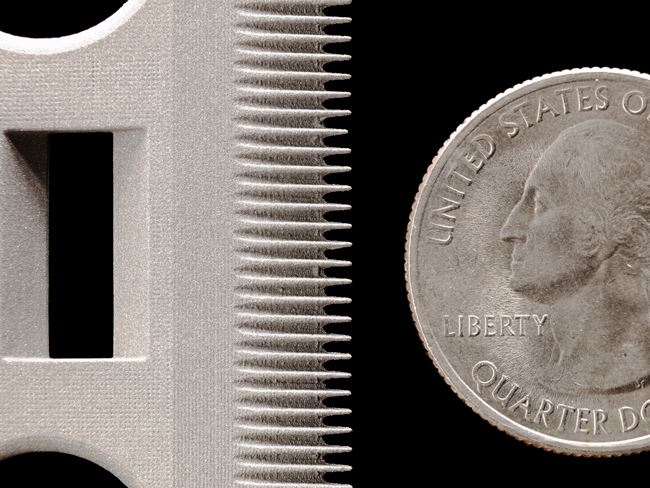 Fast-forward to 2020, where Desktop Metal’s AM portfolio allows multiple industries to harness the twin tensions of complexity and manageability. The Studio System, a metal 3D printing system for low-volume production is designed to “work where the engineer works and prototypes,” offered Myerberg. This system uses a process called bound metal deposition and is based on metal injection molding whereby bound metal rods shape parts layer by layer.

In contrast, Desktop Metal’s Shop System is a high-resolution single-pass binder jetting system geared for mid-volume manufacturing. It uses powder metallurgy binder inks to print end-use metal parts for a variety of industries, from manufacturing and tooling, to automotive and electronics. Batches of complex parts and geometries can be printed every six to 12 hours using as much as 70 kg of steel per day. The Shop System’s spot size of 16 microns per drop, is used for printing high-resolution parts (1600 DPI), such as a clicker blade used in a hair trimmer.

“The component’s tiny features are very important for the function of the hair clipper,” Myerberg explained. “They’re also difficult and expensive to manufacture via stamping or metal injection molding,” he said. “Customers can print hundreds and hundreds of these parts at the same time. This really saves them a lot of time, tooling and cutting, and gives them the high precision they need. This wasn’t possible before very high-resolution inkjet binder jetting was available.” 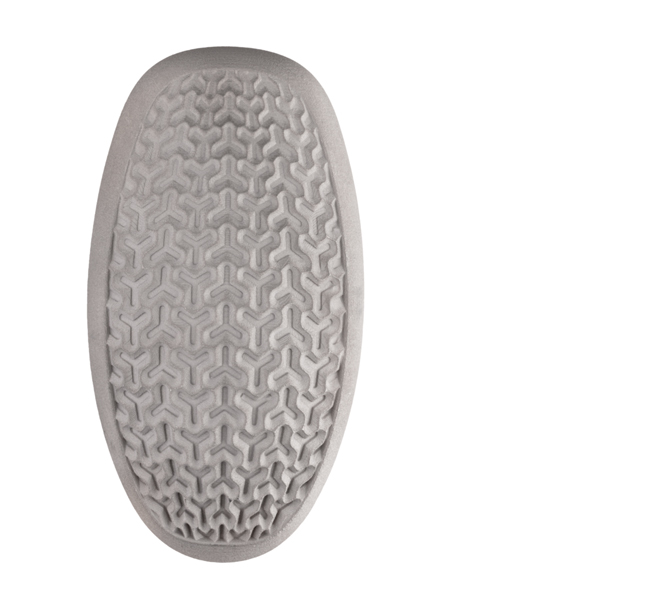 Myerberg grants that metal 3D printing is not a go-to solution for all manufacturers and, in many cases, it cannot be cost-justified. And, like Pearce, he believes its capabilities have matured to the point where it can replace traditional manufacturing processes across many industries, particularly for mass customized solutions.

Its latest offering, the Production System, employs a tooling-free binder jetting process, which means parts are supported by loose powder and don’t require welding to a build plate. This open material system is designed for rapid creation, for testing fit and function of parts ahead of production and print metal parts at scale. Desktop Metal boasts the system can transform the breakeven point by achieving print speeds of up to 100 times faster than legacy technologies and can produce up to 10,000 parts per day. The system also accepts a variety of materials, from stainless steel to reactive metals such as titanium and other high-performance alloys. The Production System will be ready for shipping in the second half of 2021.

Desktop Metal cannot plug every manufacturing gap, but the company’s adaptability and resilience in the face of uncertainty, along with its public listing provides an instructive narrative nonetheless. Myerberg argues that companies that exploit additive manufacturing by combining 3D printing technology with integrated software platforms that are kitted with generative design capabilities will achieve operational synergies.

“It’s hit that tipping point in industries where designers can begin to look at AM as a real solution for making high-volume products,” said Myerberg. Ultimately, AM solutions are the enablers that will provide wider scope and higher optimization than conventional manufacturing methods ever could, he said.