A Guide on LVS in the Nanometer Era

Layout versus schematic (LVS) is a method to validate that the layout of an integrated circuit is functionally identical to the original schematic of the design. LVS debug of today’s nanometer era designs isn’t only challenging, but also time-consuming. Therefore, reducing the LVS debug time while continuously delivering reliable, high-performance design is a requirement for chip designers who want to meet their tight tapeout deadlines and go beyond client expectations.

To ensure the correctness of the implemented design, bigger layout databases need to be checked during the physical verification stage in the same ambitious project time frames as before.

The report gives detailed information on the sources of error either in the layout or schematic by displaying the comparison results. All of the errors can be tracked by understanding the LVS report, thus avoiding any design failure that could lead to expensive mask changes and delays in getting the system-on-chip (SoC) to market.

LVS, which is a part of physical verification, checks whether the design layout is equivalent to its schematic and checks the layout against process manufacturing guidelines provided by the semiconductor fabrication labs to ensure it can be manufactured correctly. LVS verifies the design correctness with intended functionality, and formal verification matches the design’s pre-layout netlist to post-layout netlist.

These “sanity checks” should be done before running LVS:

An electronic-design-automation (EDA) tool performs LVS via a set of instructional code input, commonly known as an LVS rule deck, which is a guide for the verification tool to provide the instructions and identify files that are needed for LVS.

LVS is a two-step process:

If extraction isn’t clean, the subsequent compare results may be invalid because many of the errors reported in the LVS results will turn out to be extraction errors rather than true comparison errors. Even if the extraction errors are removed, debugging and resolving the true LVS discrepancies at advanced technology nodes can be difficult and may seriously impact the total turnaround time of a project.

1. General flow of LVS during physical verification for all PV tools.

How to Open LVS db. in Calibre

First you have to check latest OASIS file of your current db. Then from below command you can invoke caliberDrv (Fig. 2): 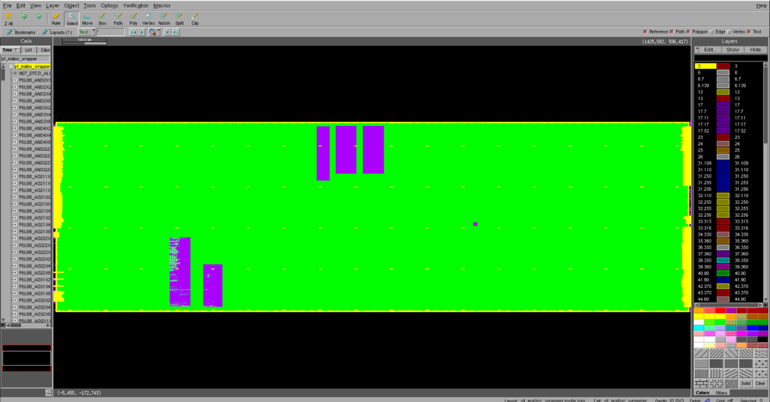 2. The Calibre gui window show all types of layers.

How to open LVS marker:

3. This Calibre RVE window is where we have to check all violations after loading it. 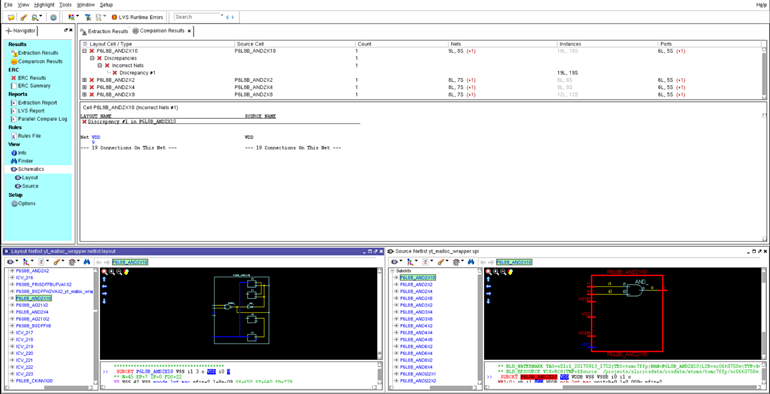 4. The discrepancies window shows all violations with the schematic.

Shorts between different nets are the most common problem during the final tapeout. Fixing those shorts is one of the toughest challenges for the designers.

When two different nets’ layers touch each other, it will result in a short in your design. Shorts can also occur when in a specific layer of GDS, two polygons having different layout text overlap and have no intersection. In the example in Figure 5, two signal nets are creating a short between each other in db.

5. In this case, one signal is a short, with the other in a metal layer.

In general practice, in the place-and-route tool we need to fix shorts before running LVS, one short present in PNR tool is showing in the above figure.

Possible of shorts include:

Once Calibre LVS has run the LVS process and generated a shorts database, the results are displayed in Calibre RVE, a result viewing tool (Fig. 6).

6. Comparison results are given after this violation in Calibre.

In the LVS report, the number of nets in the source is greater than that in the layout (Fig. 7). If a short is present in a design, then the connectivity extractor will only extract the shorted nets as a single net in the layout and will not be able to identify them as two different nets (Fig. 8). 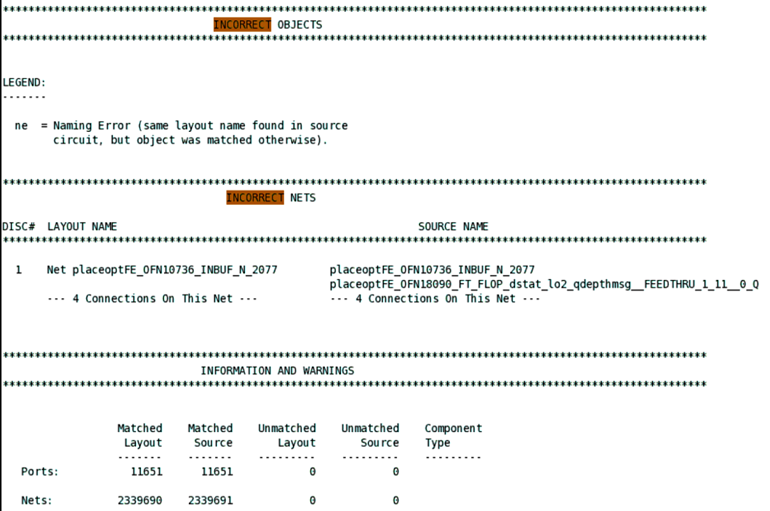 7. More can be dug up about violators in this detailed report.

8. At the end of the report, “incorrect” will appear.
If a short is present in LVS, it will generate one separate report for detailed information of the short (Fig. 9).

9. This report provides information on all shorts present in the design.

Power shorts are actual connectivity issues that have been analyzed and found to be a short by the comparison process (Fig. 10). Designers can begin debugging these comparison errors, and load Calibre RVE to see a visual representation of the layout and source netlists used in the LVS run, and debug LVS discrepancies by comparing the source and layout schematics side-by-side.

If your design has power short, then you must clean it in place-and-route before moving in signoff—otherwise, you might face a number of issues in LVS. It’s tough to debug power short in lvs. In Figure 11, the overall comparison of design is showing an error and an alternate instance is showing incorrect because of the power short. 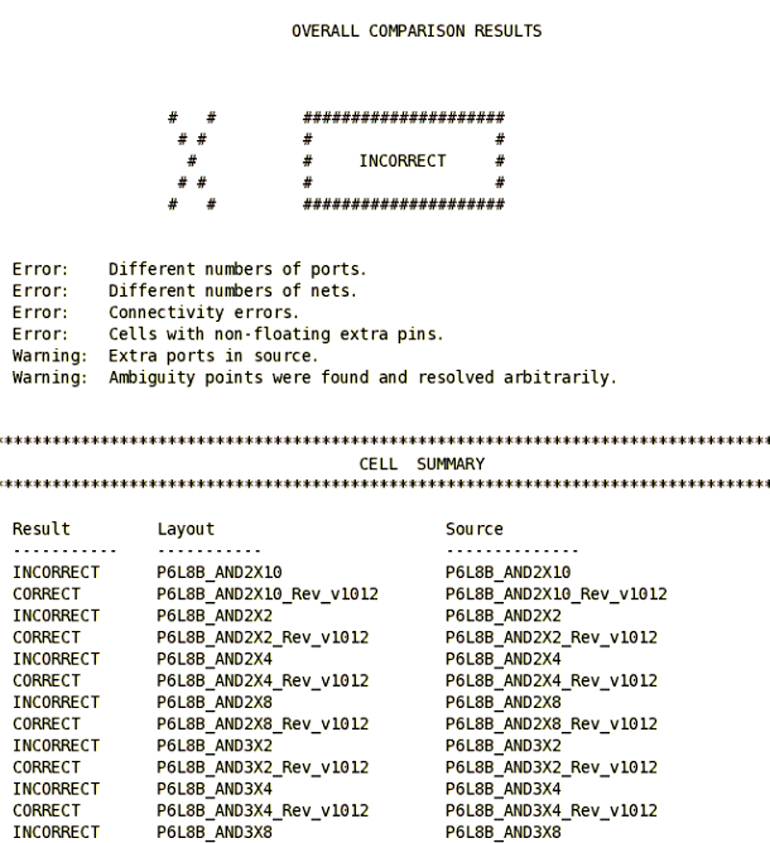 Further in the report, it shows a missing net of VSS because the tool under the VDD and VSS nets appears as one net due to a short (Fig. 12). The tool will generate a short.rpt report for the short as well (Fig. 13).

12. Incorrect nets will appear due to a power mismatch. 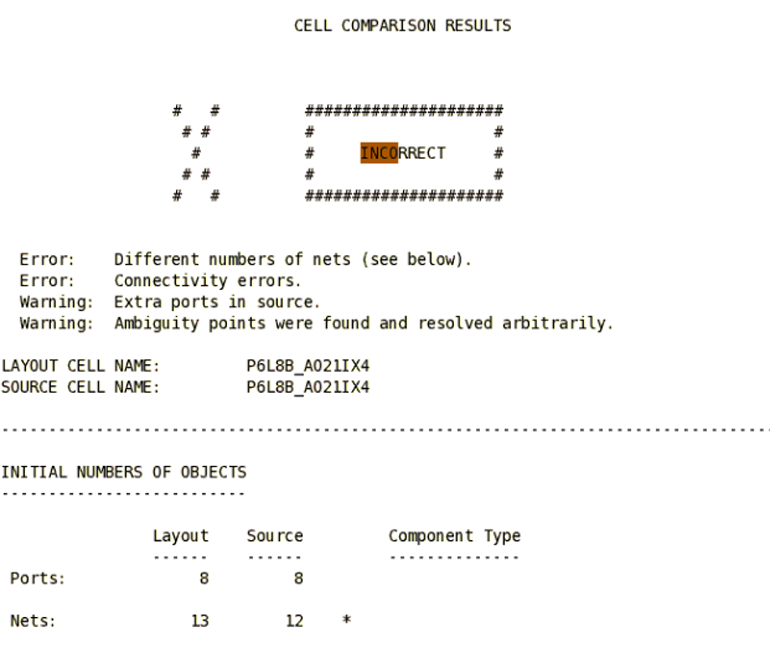 13. In this cell comparison layout, the difference in source nets will appear.

When the layout net count is greater than source netlist in the net section, then shorts exist in the design. If it’s a valid short, the tool will dump the report. Shorts file into the Calibre results directory (Fig. 14). 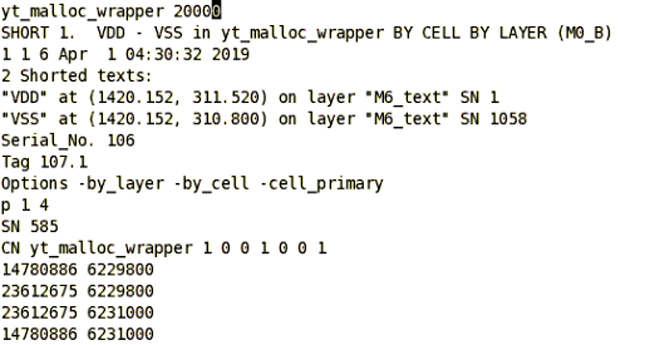 14. The short report reveals if any short is present in the design.

Note: It’s suggested that the open/Short script always run in the place-and-route tool before running LVS to detect the open/short in the early phase of the design cycle.

Even LVS will not show power open. Instead, it will show CORRECT because ERC verifies the correctness of power and ground connections, so this will not reflect in LVS.

In Figure 15, LVS shows that the example VDD and VSS nets got open.

Shorts are formed if two or more wires that should not be connected together become connected. Figure 16 shows a case where power VDD is getting shorted by one of the signal nets. Figure 17 reveals the LVS detailed errors. 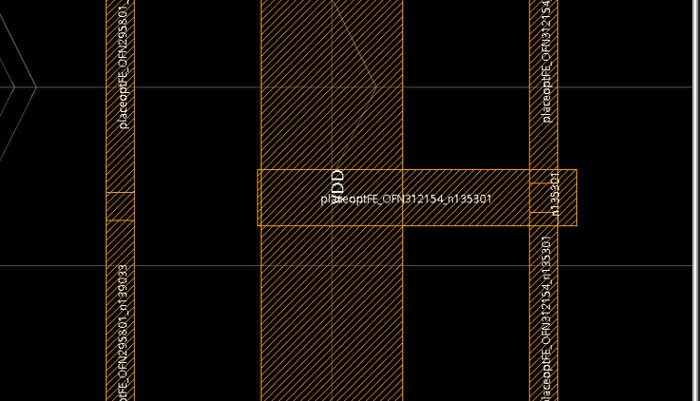 16. Here, power (VDD/VSS) is shorting with the regular signal net. 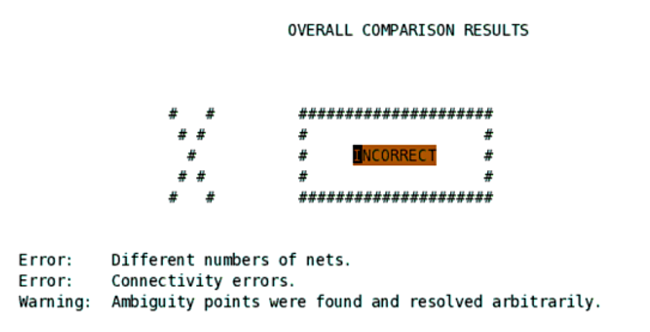 17. The overall comparison report shows “incorrect” due to a short.

When the source net count is greater than the layout netlist in the net section, then shorts exist in the design (Fig. 18). 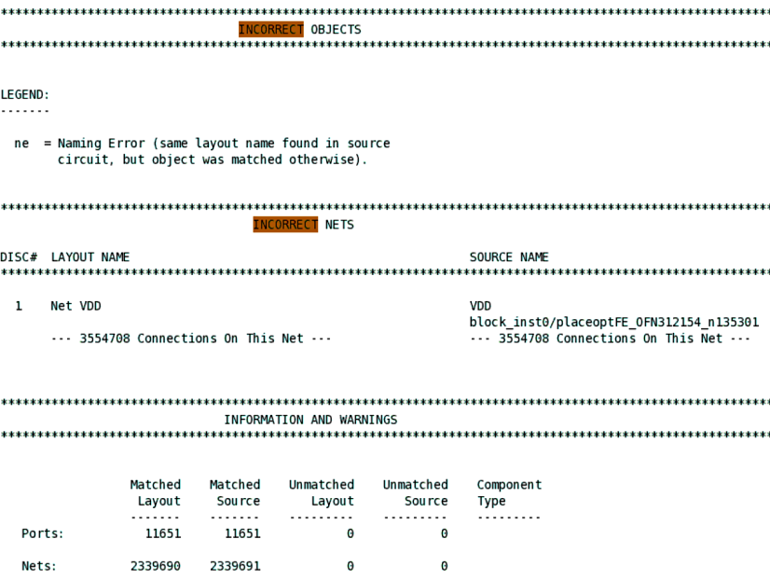 18. Report of layout and source mismatch.

Opens are formed if the wires or components that should be connected together are left floating or are partially connected. An open in a design may result in floating gates, which leads to short-circuit power dissipation and may even lead to chip failure.

In the example in Figure 19, two signal nets got open. The LVS report details these errors (Fig. 20). 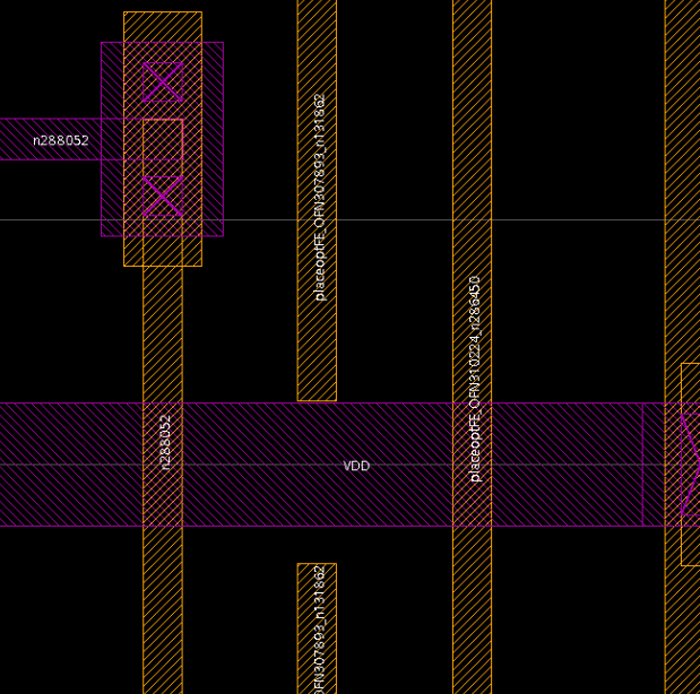 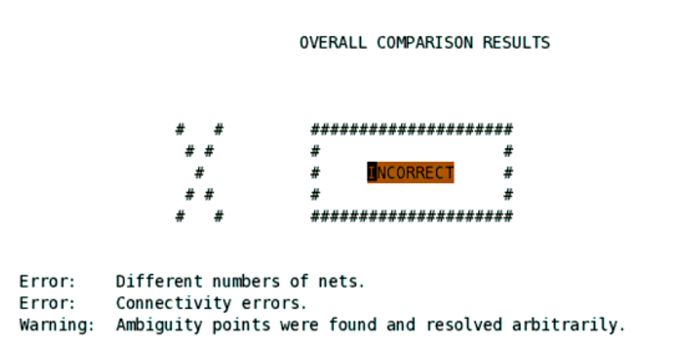 20. The overall report results will show all violations.

When there’s a lesser net count at the source side compared to the layout side (Fig. 21), then an open exists in the design. 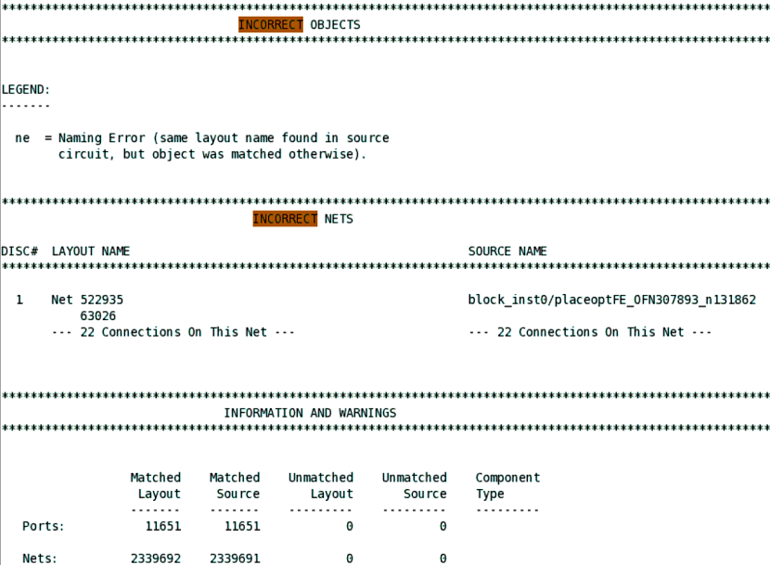 21. Report of layout and source mismatch.

This issue arises when a designer is in a manual fixing cycle and accidentally deletes the particular instance, and subsequently moved ahead. This is because the LVS algorithm only works on whatever netlist received by the user. If your source netlist doesn’t contain x instance, it will not create a layout for that particular instance and hence the comparison process will not detect the issue.

In this case, lvs will not detect this issue and it will show CORRECT. This is because it will work on the netlist that’s dumped from your latest database—if an instance is deleted an instance from the latest database, it will not reflect in the layout netlist.

Figure 22 illustrates a missing well tap. Tap cells are used to provide a substrate connection; they connect an n-well to VDD and p-sub to VSS. These cells are inserted in the layout at regular intervals based on tap rules (tap-to-gate distance) defined in the technology rule deck file. 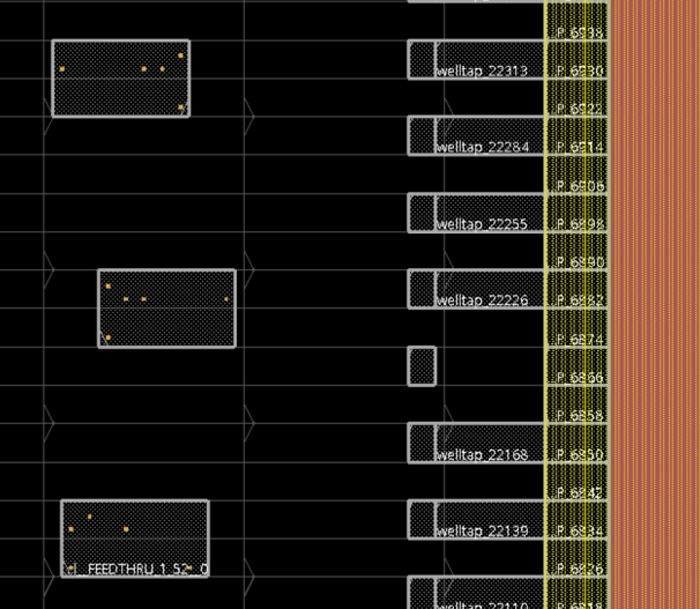 22. A well tap cell is missing in this design.

If we missed these cells, n-well continuity will stop and due to that, the instance of a row (that’s not continuous) will not get power (VDD) (Fig. 23).  The report in Figure 24 shows that particular instance as incorrect.

24. In this report, all cells have become “incorrect.”

As shown in the report in Figure 25, again there’s a lesser net count at the source side compared to the layout side. In addition, an open of VDD exists in the design, highlighted by the incorrect instances in the LVS report. 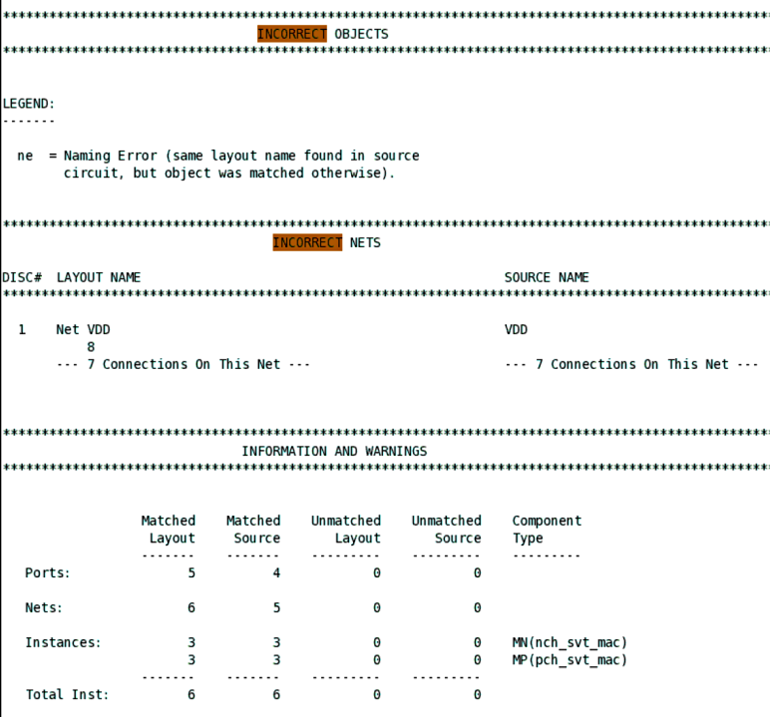 25. The detailed report shows the mismatch between layout and source netlist.

This situation arises when a designer is in a manual fixing cycle and placement filler cells became overlapped with each other. Thus, we have to run LVS with the same db. But LVS will not detect this issue and give you clean results.

If you forgot to add filler into your design and gone through LVS, then it will be hard to detect this issue in an LVS report because every alternative cell is showing incorrect due to N-well discontinuity. It will fail ERC (electrical rule check) and give floating n-well violations (Fig. 26). 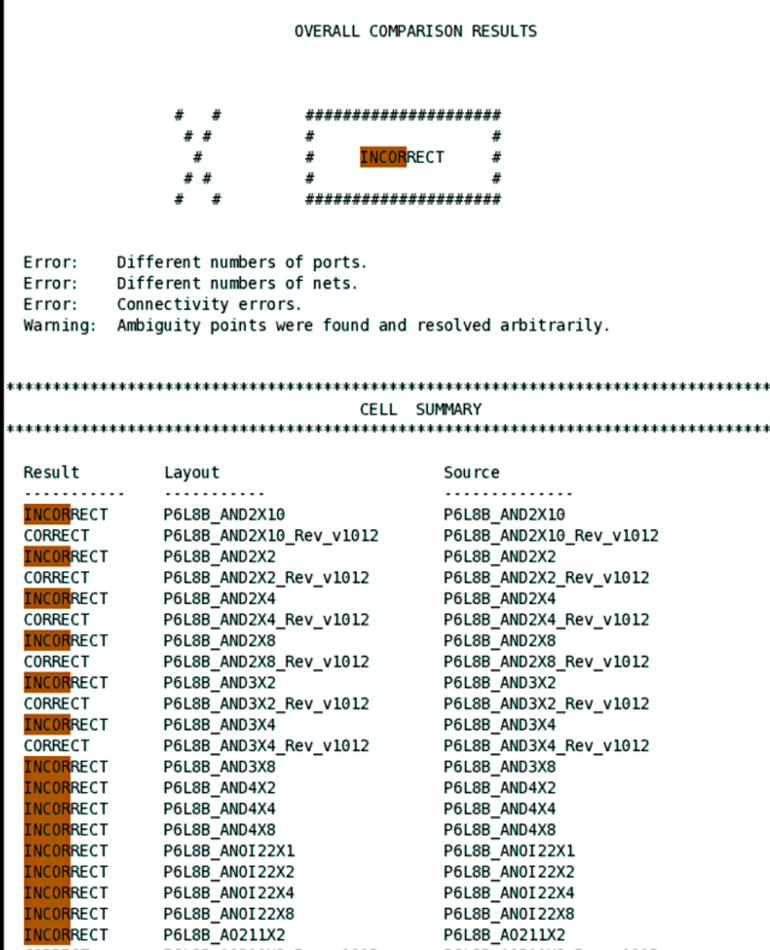 27. The ERC report indicates floating n-well violations due to missing filler in the design.

The article covered some of the general debugs that are used when you need to analyze LVS results. If we debug LVS step by step, it will help us understand the error in depth, and the GUI mode will help to understand depth of the mismatch. Using this corner case can be helpful in physical-verification iterations for debugging the LVS.