Isaac Asimov is one of the great sci-fi authors. His Foundation series is the basis for Apple TV+’s Foundation series (Fig. 1). It centers around Hari Seldon and his science of psychohistory. It takes place as the Galactic Empire, which spans millions of planets, is experiencing a slow decline. Seldon’s Foundation is designed to preserve technology and ideas so that a new empire can be created sooner. That’s because psychohistory predicts if such knowledge isn’t preserved, the dark ages will last a lot longer—on the order of 30,000 years.

1. Foundation is a new sci-fi series based on Isaac Asimov’s trilogy that will appear on Apple TV+.

But who watches the watchers and how does Eto Demerzel, aka R. Daneel Olivaw, fit into the mix? Check out Asimov’s Caves of Steel to get more insight into this character. Likewise, will the series introduce Dors Venabili? Check out Asimov’s Prelude to Foundation for this one.

Well, if you have read more of Asimov’s books, which I have done at least twice now, you’re aware of another idea Asimov is known for: The three laws of robotics that were highlighted in the movie I, Robot, based on his anthology (Fig. 2). 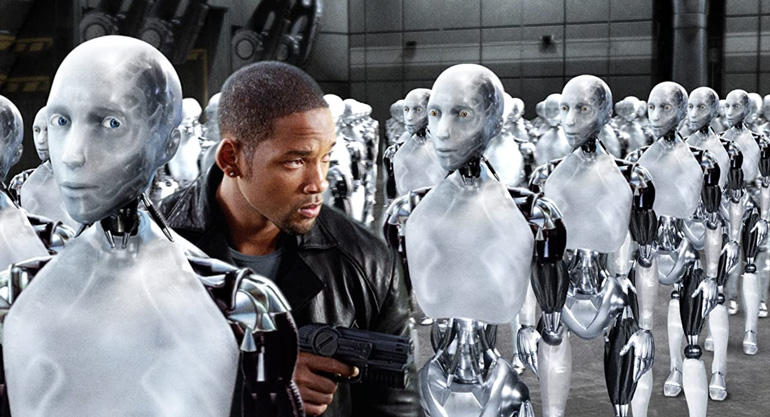 2. Asimov’s I, Robot highlights the three laws of robotics.

The three laws are:

As it turns out, the Foundation trilogy winds up touching on Arthur C. Clarke’s three laws as well:

In particular, the latter one about magic and technology is actually how the Foundation gains a foothold, which is due to the use of atomic power (albeit with the advantages only a fictional representation can create).

As it turns out, Asimov’s Foundation exists in the same universe as I, Robot, and the threads are tied together in subsequent books by Asimov and his collaborators. It doesn’t necessarily wind up where you think it will, nor will the result be one you may like.

Let’s just say that the number and scope of the various conspiracies is galactic and almost, but not quite, ageless. Humanoid robots also remain hidden from most people within this universe. It makes the Star Wars Sith conspiracy look trivial in scope.

You will find surprisingly few robots on the order of Star Trek’s Commander Data in Foundation. In fact, many will not acknowledge that they are a robot, but we’re getting too closer to spoilers.

It’s always a stretch to match ideas from fiction to the real world, but it’s so much fun.

Our study and implementation of artificial intelligence utilizes many techniques from rule-based systems to deep neural networks (DNNs). DNNs aren’t on the order of Asimov’s positronic brain, which has also been incorporated into other sci-fi incarnations like Star Trek. In that series, the aforementioned Commander Data has a positronic brain. However, many may think DNNs are just that, based on claims about how machine learning and artificial intelligence is changing the way we design systems.

Most DNNs and related neural networks often must be trained with a lot of data before they provide useful feedback. The programming of the three laws of robotics into a positronic brain might require similar work, but this is typically hand-waved away in sci-fi books and films.

Such “programming” can even get personal, as in the 24th episode of the original Star Trek, “The Ultimate Computer.” In it, Dr. Richard Daystrom (William Marshall) imprints his own engrams (memory traces) into M-5 (a computer) (Fig. 3). Of course, the indubitable Captain Kirk convinces M-5 that it should commit suicide after M-5 destroys the star ship Lexington. I’m not sure I want my engrams used in a self-driving Toyota Prius. 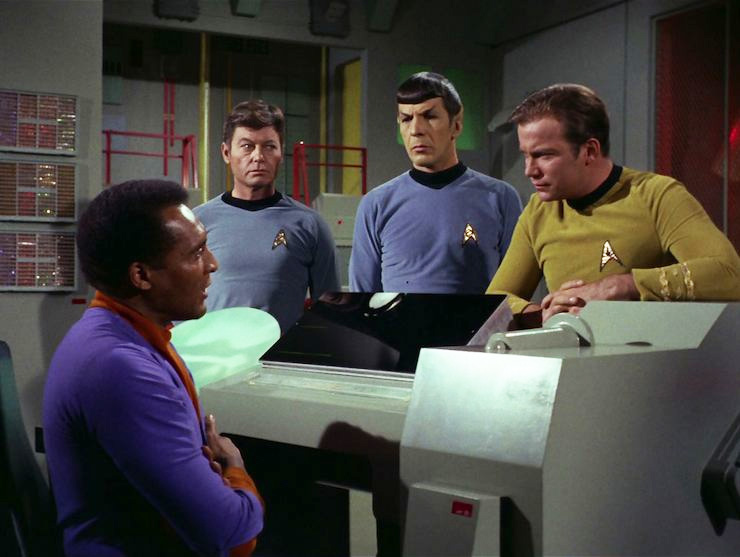 3. Doctor Richard Daystrom (left) talks to Dr. McCoy, Mr. Spock, and Captain Kirk about his M-5 computer (center) that has been programmed with Dr. Daystrom’s engrams.

But back to neural networks.

One thing to keep in mind is that these networks deliver probabilistic results. Decisions using these outputs typically work on thresholds.

Of course, digital logic implementations use a threshold approach as the underlying transistors are analog devices. The 5-V TTL logic signals actually have a bit of tolerance for both the input and output side of the logic. A logical “1” is 2 to 5 V for an input and 2.7 to 5 V on the output side. The logical “0” is 0 to 0.8 V on the input and 0 to 0.5 V on the output side. Digital devices are designed to be replicated, connected, and deal with logical devices rather than dealing with the underlying analog implementation.

Neural networks are normally used to support individual models so that a system with multiple neural networks will have unique networks. Duplicates may be used if there are common operations within a system, such as analyzing video-camera image streams to identify people or objects. A very high threshold will be needed in critical applications like obstacle avoidance for self-driving cars, but a lower threshold may be suitable for counting the number of people that pass by some digital signage.

Neural works are a significant advance in machine learning and a wide range of implementations are available to developers. However, choosing or building a neural-network model, training it, and deploying it are major efforts. A model that works well for identifying birds and cats may not work with all types of images and objects—or at least to the threshold needed for a particular application.

Solutions being delivered today that employ machine learning utilize very focused models compared to a single positronic brain. Any conspiracies will be man-made rather than from a smart robot.

COVID-19 has put a crimp in just about everything, including delivery of the Foundation series. Nonetheless, the series is set for a 2021 delivery. It’s possible to get Apple TV via a browser, so you don’t have to use Apple TV hardware to watch it.

The series is using the books as a starting point, but it will likely deviate significantly from them. All of the books that encompass the Foundation universe span millions of years. That would be a rather difficult task for a series of this type. It will be interesting to see how it all evolves.

If you want to check out another sci-fi series with lots of hidden conspiracies, then check out David Weber’s Honorverse. Like Asimov’s universe, it encompasses many books; you can download the first two in this space opera series, “On Basilisk Station” and “The Honor of the Queen,” from the Baen Free Library. Baen is the publisher. You will have to buy the rest of the books if you get hooked.