Customers have been frustrated, injured and even killed by confusing instructions, unclear operating procedures and poorly designed controls. In some cases, these interfaces and instructions were conceived by the same engineers who designed the devices. But are they the right people for the job?

A better idea is to use a multidisciplinary team that includes human factors (HF) engineers. Such a team can put together user interfaces and help shape the user experience, whether the final product is a cell phone, X-ray machine, airliner or power tool.

HF engineering draws on methods and data from psychology, industrial engineering and other related disciplines to focus design teams on user-centered product development. Ideally, HF engineers get involved in all stages of design, from initial research on intended users, through concept development, design, user testing and even error analysis after the product has been on the market a while.

A primary goal of HF engineering is to come up with products consumers can use easily and safely. This is good for manufacturers and end-users alike.

History has shown that poorly designed controls and instruments cause inconveniences and catastrophes. Here are two examples:

Landing gear and flap controls are depicted before and after the user-centered redesign which included shape coding.Drawings: Kristen Graham

Alfonse Chapanis, a pioneer in HF engineering, was called in to examine the problem. He soon recognized the cause: the landing gear and flap controls were too close to each other and almost identical in look and feel.

He had the control knobs redesigned so pilots could easily feel the difference between them, and their shape hinted at their functions. The handle for the landing gear was shaped like a wheel, while the one for the flaps was shaped like a flap. 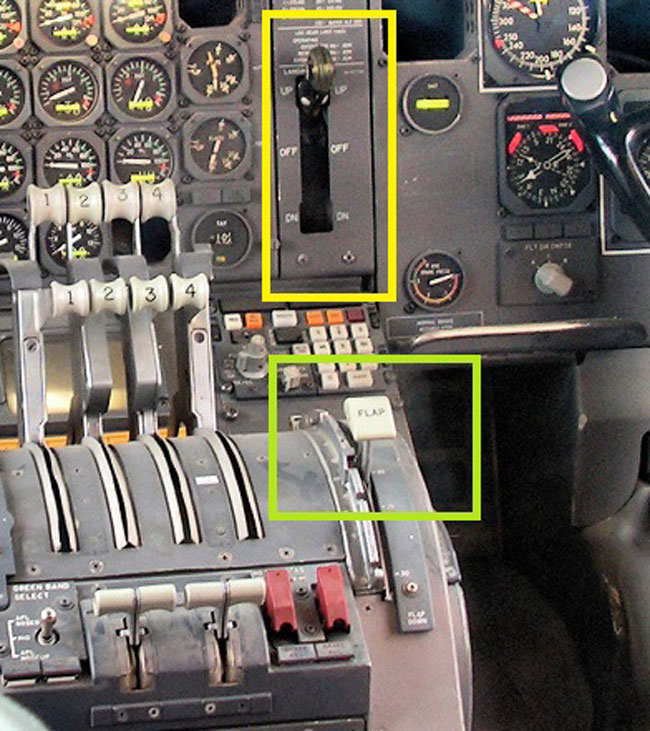 This redesign was immediately adopted and the number of crashed went down dramatically. In hindsight, this simple solution might seem obvious. The key was to address the pilot, controls, task and environment as a complete system. Complete systems work more safely and effectively when all components are evaluated together and designed around the user.

TV remotes. Early television remote controls provide a good example of poor design through neglect. As TVs grew more sophisticated, remote controls became increasingly complex and confusing. Many were not intuitive. For example, functions were duplicated, controls were not prioritized by frequency of use, complementary functions were not grouped (e.g., volume and mute), buttons were similar in size and shape and difficult to tell apart, and buttons sometimes did not provide enough feedback to know if they had been pushed. 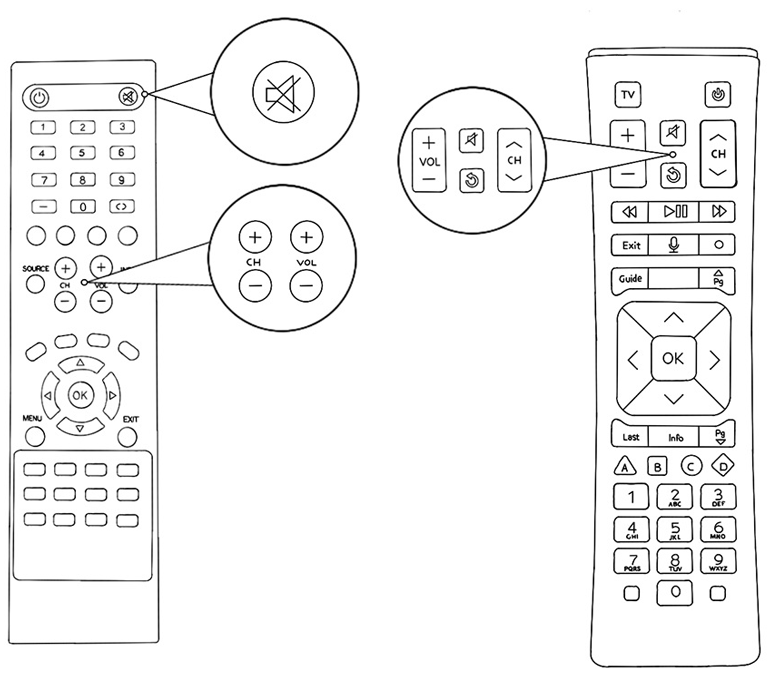 Early remote control (left) with identical channel and volume controls, which are close together, with mute placed above. Redesign (right) with improved layout and spacing, rocker buttons for channel and volume, improved tactile feedback and with mute collocated with volume.Drawings: Kristen Graham

With this newfound knowledge, the design teams came up with controllers that had related functions grouped together using size, shape and spacing; the most-commonly used function more prominently placed; and crisp button feedback. It’s what most of us use today.

By its nature, HF engineering is multidisciplinary. University-level education programs—typically at the graduate level—tend to be housed in either the industrial engineering or psychology departments, and often span these two. This mix may seem odd to the outsider, but the discipline evolved from roots in psychology (focused on perception, cognition and memory) and industrial engineering (focused on workplace design, efficiency and productivity). That said, people tend to find their way into the profession from a variety of educational backgrounds including computer science, physiology, biomechanics, cognitive science, medicine and a variety of engineering disciplines. 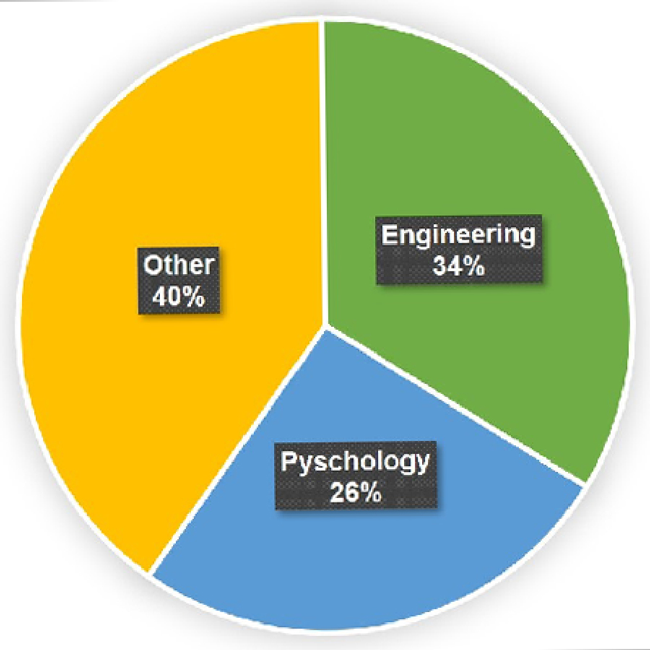 This pie chart shows the educational backgrounds of people working in the field of HF engineering, based on the highest degree of members of the HF & Ergonomics Society.

At least as diverse as this variety of educational backgrounds are the job titles of people working in HF engineering and closely related/overlapping fields. Terms such as ergonomics, usability engineering, engineering psychology, interaction design, user-centered design, usability testing, user experience (or customer experience) and architecture/design all have slightly different connotations, but have significant overlap with the field of HF engineering (see Glossary below for details).

HF engineers also have tools to use throughout a design project. For instance, at the front end of a project, they have tools to tackle user research and evaluating alternative concepts. As the project continues and focuses on a particular concept, HF engineers can evaluate the usability of prototypes and develop usability, manufacturability and serviceability requirements to include in the product specifications. Proceeding through the design phase, HF engineers work with team members to evaluate the how proposed designs affect product usability by considering established principles and, if needed, running usability tests on product components. At this phase, usability testing assesses components much as bench testing assesses capacity, durability and other attributes.

In the final stages of the product development process, usability testing covers the entire system, and results are compared to the original product’s usability specifications. These contributions are part of user-centered design HF engineers can head up  for the development team. HF engineers are responsible for understanding who the users are and how they might interact with the product. This goes beyond how users should perform a task. Users can do unexpected—and sometimes, undesired—things, including putting themselves at risk by misusing the product. This is especially concerning with medical products that must be approved as safe and effective for use by the FDA. HF engineer help teams recognize these problems and design out possible misuses. 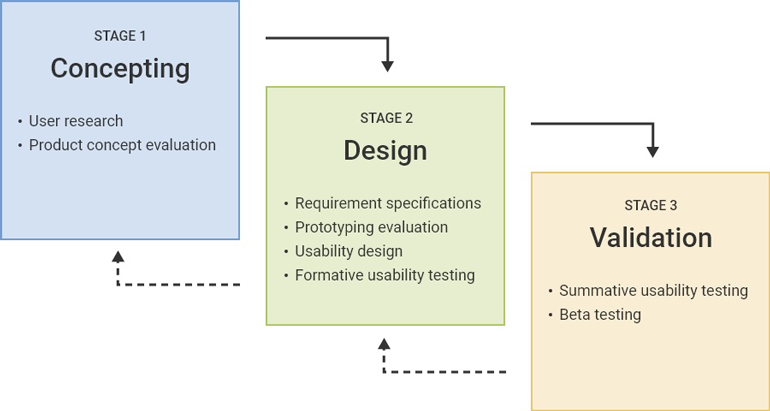 Human factors engineering collaboration with the iteration loops that can occur in a traditional stage-gate type product development process.

Whether or not the full scope of HF engineering is brought to bear on a development project depends on organizational relationships and product complexity. The closest and most productive relationships are when an HF engineer is embedded in the design team. This lets the HF engineer provide support throughout the entire process. For complex products, a full-time presence on the team lets HF engineers participate in all usability decisions that typically arise between concept to launch. In many cases, however, an engineer is also working on several smaller projects

HF engineering support can be provided from a company’s central HF group, or an employee dedicated to a product line or some other corporate source.

Some companies, however, get some (or all) of their HF support from experienced outside consultants. This can be effective, especially if the company regularly uses the same consultants so they are familiar with the products and how they’re used. Hiring consultant HF engineers can be justified for addressing special problems or providing third-party input. It is also a good way to get exposure to HF engineering.

Good design emerges when disciplines work in synergy to ensure end-users remain at the center of the design process. Ensuring products, we design are safe, intuitive and easy to use is beneficial for all.

Engineering psychology focuses on perceptual and cognitive aspects of human-machine interactions. The term was once more common but is still used in some academic and industrial departments.

Ergonomics is often considered to be focused on physical interactions between humans and machines, but mainly office furniture. It is more accurately described as a synonym for HF engineering. In Europe, it is more common than the term  human factors (HF).

Human factor engineering is the discipline of designing human-machine systems to maximize safety, efficiency and performance. It takes into account physical, perceptual and cognitive capabilities and limitations. Information architecture refers to the organization of information (categorization, arrangement, flow) in a product’s user interface, documentation or website.

Usability testing involves representative users carrying out typical tasks on the product or prototype as it goes through design and development and design. Their behaviors and comments are documented and the reasons for difficulties probed. The design team uses these results to improve the design.

User- or human-centered design are broad terms referring to a philosophy and set of processes and tools for ensuring product design is based on the user’s needs and desires. It encompasses all design disciplines, including engineering design.

User experience architecture or design, customer experience (UE, UX) all refer to a user’s experience with a product or system. It can include a variety of interactions such as first learning of a product, the purchasing decision, unpackaging, setup, use, maintenance and eventually disposal/recycling. The term “user experience” (UX) is often misused to refer exclusively to two-dimensional user interfaces (e.g., websites, mobile apps) because the term became more widely used during the internet’s boom years.

For more information, contact the Human Factors and Ergonomics Society.