As the world struggles to contain a rapidly-spreading virus that has ravaged the global economy, reordered everyday life for large parts of the population, and inflicted a heavy death toll, electrical and electronics engineers have had to tolerate more uncertainty than they may be used to.

Despite the global economic collapse caused by the coronavirus, most engineers are not seeing major changes in their compensation. According to a survey by Electronic Design and Endeavor’s Design Engineering Group, most of the highly-skilled workers in engineering are as encouraged as ever about their jobs. The results also revealed that, unlike large swathes of the workforce, engineers are mostly feeling confident about their future prospects for compensation.

More than 1,100 engineers responded to the short-form survey, volunteering to share details about their overall compensation with Electronic Design, Microwaves & RF, and Evaluation Engineering.

There are challenges, however. Most of the respondents are struggling with the stresses of working remotely while also grappling with tightening deadlines, continuous education, and other issues that have lasted for years. Many are also working for employers that are delaying raises, reducing wages or canceling bonuses as the global economy sours. But for the most part, engineers are prospering.

The results revealed a median base salary of $100,000 to $124,999 for the engineering profession. The base salary is supplemented witha median bonus in the range of $1,000 to $1,99 9, according to the survey results. At the top of the pay scale, engineers in management and executive roles are padding their pay packages with thousands of dollars from share-matching programs and stocks.

Buoyed by the soaring demand for engineering talent, more than 65% feel that the potential for salary advancement is as favorable as any point in the last five years. Around 68% said that they are adequately compensated for what they do, and 70% said that they never consider leaving the profession to find another line of work.

While many of the respondents feel as though they should be making more money, around 92% said that they would recommend it as a career to younger generations. Even though many feel that they are under more pressure from management than ever before, the intellectual challenges of the job and other factors are lifting their morale.

There are many factors that impact engineering pay, including education, experience, location, title, age, company culture and profit as well as economic conditions and the status of the labor market. 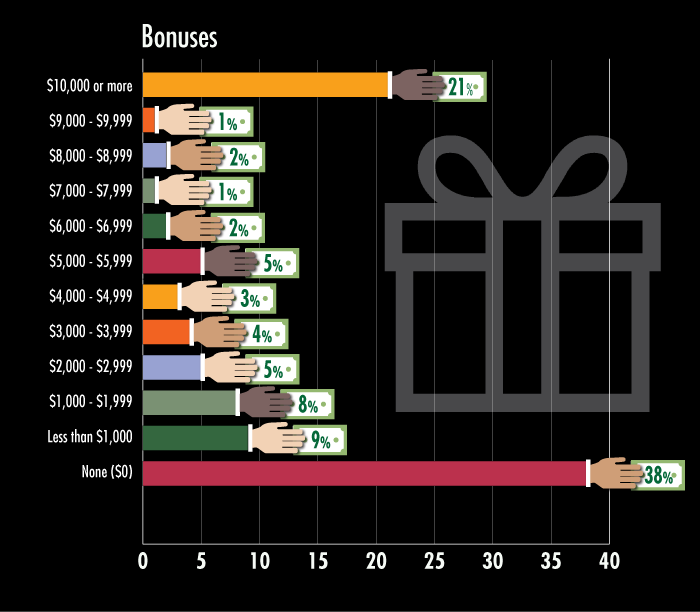 The virus, which has a death toll of more than 225,000 to date in the United States, also remains unpredictable. Total cases of the virus could continue to increase around the world, prolonging the pain in the global economy, leading to permanent job cuts, and creating uncertainty. Or alternatively the world could start to bring the virus under control, easing the economic woe. Around 30% of the respondents said that they have been stressed out about the state of the economy in 2020.

But many highly-skilled workers, including electrical and electronics engineers, are in a privileged position. While the economic fallout from the deadly virus has forced millions out of work in the US alone, paychecks have continued to come through for many of the engineers replying to the poll. While many respondents are struggling with burnout and family responsibilities, most are able to work remotely without many difficulties and are covered by company healthcare plans.

“Most of us can work from home without having results impacted too much,” said one respondent. “The current situation shouldn’t affect long-term perspectives on engineering as a career.” 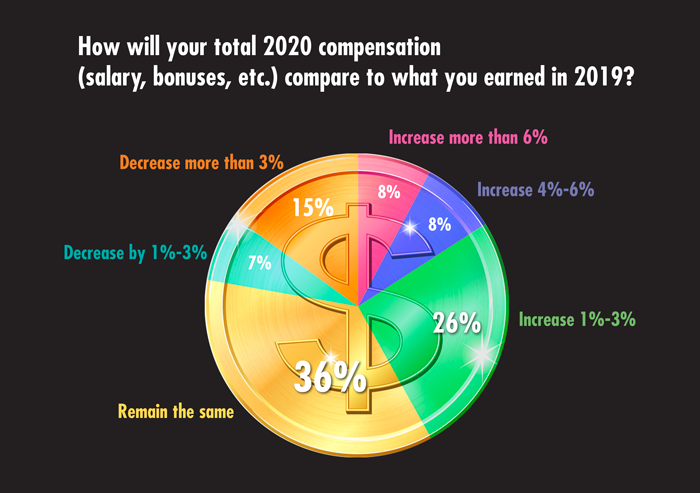 Still, the virus is hurting short-term perspectives on the profession. Over 26% of respondents said that their overall compensation will fall due to the economic fallout from Covid-19, the potentially lethal malady caused by the novel coronavirus. Around 68% said there would be no unforeseen changes to their overall rate of pay. Only 6% said that they expect an increase in their earnings.>

“For us, raises and promotions are going forward, although the money pool for raises has been cut so pay increases will not be as significant as they would’ve been without the economic pressures of Covid-19,” warned one respondent.Another lamented that the fallout from the virus not only cut into orders from customers but also closed production plants and worsened component shortages. 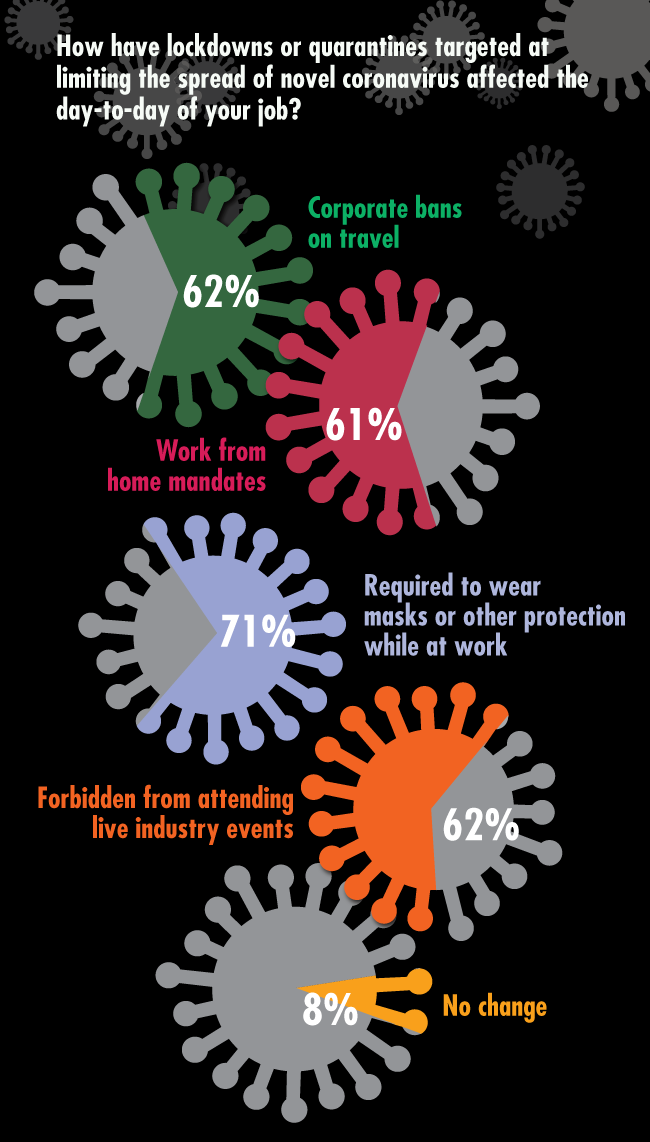 Still, over a quarter of the respondents revealed that their pay would increase by 1% to 3% this year, while another 15% said that their overall compensation package this year would be up 4% or more.

Roughly 36% of respondents said that their overall pay would remain the same, a major jump from previous years. In addition, slightly more than 5% of respondents said that wages would contract by 1% to 3% in 2020. According to the survey, about 15% revealed that their compensation would fall more than 3% compared to last year due to delayed bonuses, pay cuts, or other factors.

More than half pointed to personal performance as a key factor in calculating their bonus, while another 61% said that their company’s finances factored into the final tally. For 34%, a company’s profit-sharing policies calculate to their bonus. Around 12% said that patent grants contribute to their bonuses. Moreover, 12% said they tend to land bonuses after meeting major engineering deadlines.

For many design engineers, other perks, including travel allowances, have been paused. Some said that their company has paused 401(k) matching programs to reduce fixed costs during the crisis.

Even though many employers have paused hiring plans, many engineers are on the lookout for new jobs. Changing jobs can result in a raise that may take longer to get through an internal promotion. Around 10% are actively seeking a new position, while another 33% responded that, while they’re not looking to change jobs, they would follow up if contacted personally with a promising job offer. About 25% said they would follow up if they heard about an interesting opportunity.

But as the virus continues to spread uncontrollably in many parts of the world, other respondents said that they feel secure in their current position and generally enjoy their jobs. Around 32% said that they have no plans to change jobs in the foreseeable future. 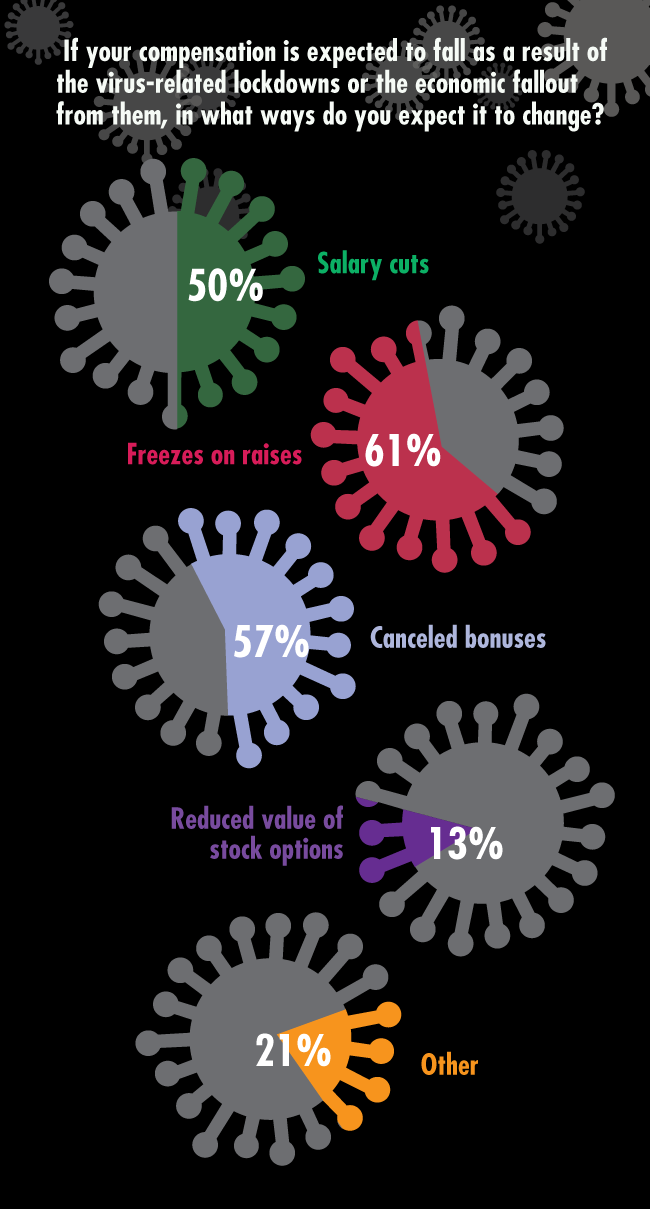 Many feel that moving to a management role or changing jobs are the only ways to guarantee wage growth in engineering. But at the same time, some respondents said that, given all the challenges of engineering, these salary gains are not as generous as they should be.”It always seemed to me that you have to leave real engineering and move to management to make more,” said one respondent.

“Engineering salaries start higher and cap lower than many other professions,” remarked one of the electronics engineers replying to the survey. “As a career, engineering is in a saturation period, where only one sector of the profession—software—is showered with salary advancement and higher than average pay, even in entry-level jobs,” another worker said.

Last year, many companies continued to raise salaries and roll out better bonuses to keep employees happy and lure out engineers for hard-to-fill positions. Many firms also shelled out for continuing education, as the tight market for engineering jobs—at least in the US—underscored the need to nurture high-end skills internally. But according to the survey results, many of these perks have been scaled back or halted as the virus continues to hammer the global economy. 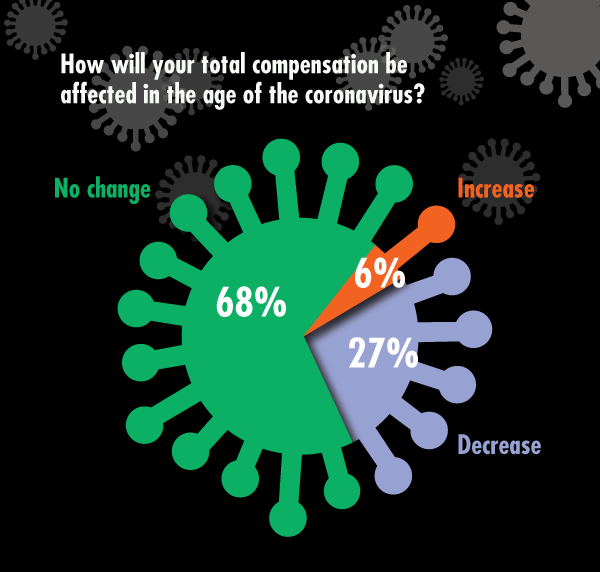 Other factors could hurt wages in the short term. Employers may not be in a position to promote workers in a recession, and engineers debating a job change think twice in a struggling economy.

Overall, engineers are also incurring indirect costs. Only 20% said that their company reimburses employees working remotely who require upgrades in internet speed or a change in their service provider. On the other hand, some respondents said that mandates on remote work have helped save on commuting costs, including car services, tolls, and parking. There are pros and cons.

More than 68% of respondents reported feeling content with their 2020 compensation package. But among engineers that feel undervalued, more than 50% said that they deserve a wake hike of 10% to 25%. Roughly 20% of respondents who feel undercompensated said that their compensation package is up to 10% out of line with what they deserve, the survey showed.

For many employers struggling with the skills shortage, the virus is complicating the calculus. Only 28% of the study’s respondents said that their company plans to create more engineering jobs in 2020, a steep decline from previous years. More than 60% replied that they would maintain current staffing levels, closing open positions or delaying new hires to ride out the economic slowdown.

Only around 12% of respondents said that their company plans to reduce headcount by buying out employees that agree to leave their jobs or resorting to involuntary job cuts to reduce fixed costs. But given the challenges of scouting and hiring highly skilled engineers, it’s clear that many companies are trying to hold onto the workers they already have. Around 69% of the respondents feel that their company is as focused on employee retention in 2020 as it was last year.

“Covid-19 revealed that engineering is an essential service, and one that is well compensated,” said one survey respondent. “I don’t foresee engineering jobs or salaries declining substantially.”