The engineering industry is expressing concern about a deepening shortage of skilled workers. More than 63% of respondents to Electronic Design’s latest salary survey said that they believe demand is outpacing the supply of workers with premium engineering skills. The survey spotlights concerns about the pipeline of talent entering the workforce and the culture of continuing education that is woven into engineering.

Most respondents said that they feel confident about their prospects for employment. But many are also troubled by the possible shortage of skilled engineers and its impact on the broader industry, according to 750 respondents polled by Electronic Design and Machine Design last year. Endeavor’s Design Engineering and Sourcing group rolled out the survey with questions on more than 40 separate topics, ranging from salaries to job satisfaction.

The survey underscored a range of opinions on the possibility of a skills shortage. Some respondents argued that open positions are remaining unfilled longer due to the dearth of skilled engineers. But others feel that—due to their location, skills or experience—the skills shortage is overstated. Skilled workers in locations with lots of open positions—Texas or California, for instance—are generally fighting for limited jobs with many other engineers.

“There is a strong need for engineers in today’s workplace that is not getting filled,” one respondent said. “Companies are advertising for positions for a long time,” another said.

“With the number of companies cutting back or looking for specific skills, new engineers may have a tougher time finding opportunities for growth,” one respondent stated. “We all hear about the falling unemployment rate, but I know engineers who are still searching for employment or they are giving up and retiring.” But other workers are increasingly in high demand: “I’m asked to apply for three jobs every week,” another respondent said.

More than 65% of engineering managers said that they struggled to locate candidates for vacant jobs last year, according the results of the survey. Around 30% of respondents ran into trouble trying to hire experts in analog engineering, while 40% faced challenges trying to enlist employees with radio frequency skills. Moreover, 34% of the respondents also said that they struggled to lure candidates for advanced systems engineering roles.

About 88% of engineering vice presidents polled by Electronic Design and Machine Design said that they had trouble finding skilled candidates to apply for open positions last year.

Some respondents faulted employers for the unwillingness to upskill the workers they hire. Others said that employers are setting tougher requirements for engineering jobs, raising the bar for potential hires. Many employers are not only looking for workers with general engineering gifts, they are also demanding premium skills in systems, embedded, or other types of electrical engineering, shrinking the pool of potential candidates to hire.

“The demand for software and hardware skills in embedded systems is booming,” one respondent said. But they added that they have been struggling to enlist “real talent.”

To lure out engineers for open positions and hold onto the employees they already have, employers are increasing wages, boosting bonuses and rolling out other perks. Some are also paying for continuing education, as the shortage of skilled engineers looking for jobs pressures them to nurture the talent they have. But many respondents said that they feel forced to jump through hoops before they start seeing the salary increases they deserve.

Some believe that moving into management roles or changing jobs are the only ways to guarantee wage growth in engineering. “Anyone who wants to continue in design knows that they have almost no chance for career advancement,” one respondent warned. “The long-term job security is not what it once was,” another warned. “I believe engineers are better served moving from company to company over time to get pay progression.”

Engineering jobs are also facing future uncertainty due to the global outbreak of the new coronavirus. The transmission of the virus has been causing shutdowns around the world and tearing through the global economy. The illness has also hindered the supply of parts needed for consumer electronics and other gadgets. The economic fallout could cause businesses to slash costs that could hurt engineering departments—or lead to layoffs.

Many respondents complain that salary increases have slumped in recent years, dragged down by the dissipating sense of loyalty between employers and employees. Some said that employers are outsourcing more engineering jobs, which they worry not only hurts wages but also wipes out open positions. While most respondents don’t feel threatened by contractors taking their jobs, many are keeping their eyes open for new opportunities.

“There are too many H1-B workers flooding the market,” one respondent stated, referring to the international visa program for highly-skilled workers in the United States. They said that “management believes that throwing enough inexperienced engineers at a problem leads to results, and they don’t like hearing things like, I don’t know, or That won’t work.” Another warned: “Companies are looking to hire contractors more often than previously.” 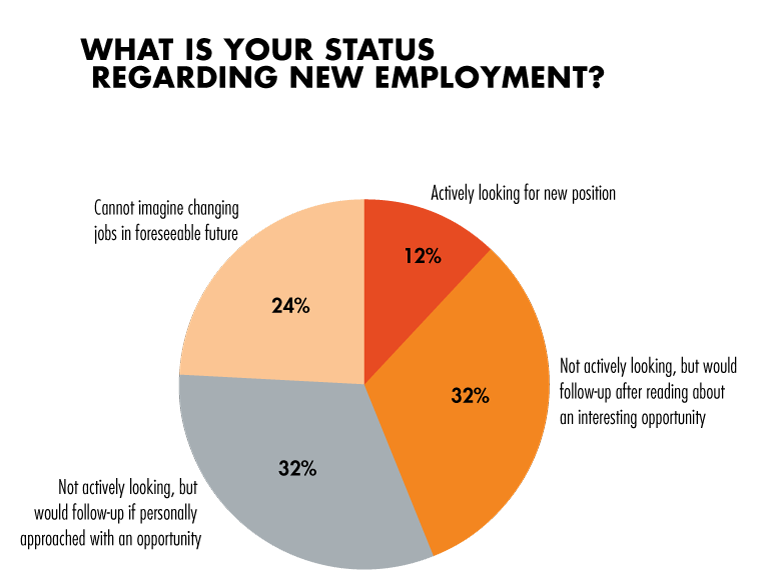 The share of respondents that were actively looking to change jobs was 12% last year, or double the percentage that actually swapped jobs. Around 32% of respondents said that, while they were not trying to change jobs, they would follow up if contacted with the right opportunity. Only around 24% could not imagine changing jobs in the foreseeable future. “I’m constantly being contacted by recruiters for open positions,” one respondent said.

More than 12% of respondents said that they changed roles last year. About 42% were promoted from within and 32% were hired by another company, lured by higher wages or other perks. Last year, the average worker in engineering had been employed at the same company for 12 years. While around 28% said that they have been at the same employer for one to four years, 29% said that they had not changed employers for 10 to 25 years.

The skills shortage has deepened as more of the workforce grows older. Around 37% of respondents last year said that they have had engineering jobs for at least 30 years, and another 20% said that they have been giving thought to retirement. As baby boomers and other generations hang up their soldering irons, these workers are also taking knowledge with them, leading to an employment vacuum that younger workers are filling.

Many engineers also complained about the lack of support on the part of employers for continuous education. Some said that they are struggling to sacrifice time to learn about the latest in the electronics industry and to master new skills. While many employers are willing to pay for trade conferences and training programs, engineers said they could be investing more in the ongoing education of their workforce, particularly younger workers.

Even though some argued that younger generations of workers were not learning the skills they need to succeed, many acknowledged that they are also entering jobs with valuable insights and new skills: about 56% of the respondents said that recent graduates are bringing new talents to the table. But since electronics and electrical engineering skills turn over fast, it is important for new engineers to be ambitious and fast learners.

At the same time, skills that have been falling out of favor for years—ranging from radio frequency to analog engineering—are suddenly surging in demand. Other skills, however, are increasingly common. Last year, only around one out of four of engineering executives said that they struggled to hire embedded engineers, but 41% said that they had trouble hiring systems engineering experts—about the same percentage as software engineers.

While many feel left behind by the engineering industry and contend that their pay should be higher, most respondents feel that the employment picture in engineering is promising. More than 60% reported feeling content with compensation last year, while 90% said that they are content in their current position. “The industry has completely changed, and the career path is different, but there are still opportunities,” one respondent said.

While some respondents warned that they could not recommend engineering as a career to young people, around 90% said that they feel comfortable doing so. “Engineers solve problems, and there are lots of problems in the world that have yet to be solved,” one respondent said. “I believe skilled engineers can easily move into new roles,” another said. “As long as they enjoy their jobs, they can become effective leaders or mentors.”