Wages for design and development engineers rose in 2019 as employers fought to outbid rivals for talent, according to the results of Electronic Design’s latest reader survey. The results underlined that while most respondents are prospering and feeling content about the future prospects for employment, others feel left behind, grappling with what they fear is stagnant salary growth and less loyalty from employers.

Even though engineers are beset by concerns over continuous education, overworking, and outsourcing—and the impact of these issues on their career development—more than half said that they feel adequately compensated. Nearly 60% of the respondents reported satisfaction with their earnings. Others, while they feel undercompensated, said that they still enjoy engineering as a career and that it offers stable, if sedate, salary growth.

Employment rates in engineering also remained stable, according to the results of the survey, rolled out in cooperation with Machine Design, Hydraulics & Pneumatics, and Microwaves & RF. Last year, more than one out of three respondents said the company where they worked planned to boost hiring. But one of the major tradeoffs is that they worked more than 50 hours on average per week at the office, home, and other locations.

Overall pay also improved, according to more than 750 respondents to the new survey. Around 69% of respondents, buoyed by the surge in demand for engineering prowess, said that they believe the potential for salary advancement is as favorable last year as it was at any point in the last half decade. On average, respondents reported $100,995 in annual base salary and $6,190 in bonuses, stock grants, and other forms of income.

But the engineering industry is facing future uncertainty due to the global outbreak of the coronavirus. The transmission of the virus has been causing shutdowns around the world and tearing through the global economy. The devastating illness has hampered the supply of parts required to roll out new consumer electronics and other products. The economic devastation could lead to furloughs, firings, or reduced pay for design engineers in 2020.

Others feel that wage growth has already started flagging, dragged down in recent years by the eroding sense of loyalty between employers and employees. According to many respondents, outsourcing and the contracting out of engineering jobs has also weighed on wages. Some respondents—even though they cherish the intellectual challenge of engineering—are struggling to recommend it as a promising career for young people.

Engineering salaries are affected by many factors, including education, location, title, experience, age, and the employer’s culture and overall performance. For many of the respondents, these factors also affected their confidence about employment and pay prospects. The respondents with abundant access to jobs due to location or skills are generally more optimistic about the future than those warning that jobs are scarce.

“The potential for salary advancement is there if you know what levers to pull and keep your eyes out for other opportunities internally and externally,” one respondent pointed out. “I’m constantly being contacted by recruiters for new positions,” another confessed. Only 21% of respondents said that they would contemplate leaving engineering to make more money, while more than 90% indicated they are satisfied with their current position.

Even though employers are concerned with holding onto the employees they have, many respondents are on the lookout for new engineering jobs, which often come with raises. Around 12% said they are in the process of pursuing a new position. Another 32% replied that, while they are not looking to change jobs, they would follow up if contacted with an offer personally, while 25% don’t foresee changing jobs or companies in the near future.

Engineering employers are also increasing investments in recruiting. Last year, two-thirds of respondents said that their company was struggling to locate candidates for vacant engineering jobs. More than 30% encountered trouble trying to enlist experts in analog engineering, and 40% faced challenges in recruiting radio-frequency engineers. Around 34% said that they scrambled to hire workers with advanced systems engineering skills.

More than 60% of respondents believe there is a current shortage of engineers. Outsourcing is also feeding into fears of the skills shortage, according to respondents. Some blamed employers unwilling to upskill their new engineering hires. Others said that employers should ease requirements on vacant roles, which tend to require not only engineering prowess, but also unique insight into analog, power, or other specialties.

Even though many are struggling to hire engineers that meet requirements, employers continued to add jobs last year. Around 42% of respondents said their company planned to create more engineering jobs in 2019, while another 48% planned to maintain current hiring levels. Slightly more than 10% of the total respondents changed jobs last year—of these, 42% were promoted from within and 32% accepted another company’s job offer.

To keep current employees and lure out engineers for hard-to-fill positions, employers are padding salaries and rolling out better bonuses, stock options, and other workplace perks. Some employers are also shelling out for continuous education, as the tight market for engineering jobs increases the need to nurture new skills internally. Others reported that their employers are matching contributions to retirement and other saving accounts.

The overall pay for electrical and electronics engineers has been escalating in recent years. More than 35% of the total respondents estimated growth of 1% to 3% in income last year, while 16% anticipated that they would see raises in the range of about 4% to 6%. Around 25% of respondents indicated that there would be no change to their overall rate of pay, while 6% said that they were concerned about their wages contracting in 2019.

But not all respondents feel that the incremental pay increases are very significant given the challenges and pressures that accompany designing new products. Around 28% said they have contemplated leaving the profession due to burnout, while 41% considered it to do something less stressful. “As long as corporate culture views engineering as a cost instead of as an asset, then our jobs will remain under threat,” one respondent warned.

Engineering employers also continued to roll out bonuses. Last year, the average respondent said they earned $3,729 in bonuses, or more than 3% of the average annual salary. More than 48% said personal performance was one of the major factors used to calculate the bonus, while 46% felt the financial performance of their division factored into the final tally. Around 34% also benefited from company profit-sharing policies. 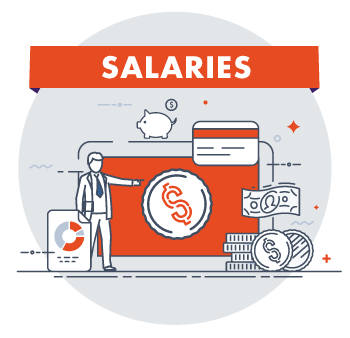 The survey results also highlighted income gaps based on an engineer’s title within their company. Design and development engineers averaged $3,570 in bonuses in 2019, while the bonuses rolled out to engineering management totaled $5,090 on average. More than 10% of the total respondents said that patent grants factored into bonus pay, and 15% said they tended to get bonuses after reporting progress on big engineering projects.

About 25% of engineering employers gifted stock to employees as another form of profit sharing. The average respondent earned $1,450 through stock grants or share-matching programs. Roughly 10% of respondents estimate that they landed more than $10,000 through the redemption of stock alone last year. Engineering executives landed $3,460 in stock, which is more than than double the average rate for rank-and-file engineers.

Some feel that moving into management roles or changing jobs are the only ways to guarantee wage growth in engineering. “Anyone who wants to continue in design knows that they have almost no chance for career advancement,” one respondent warned. “The long-term job security is not what it once was,” another lamented. “I believe engineers are better served today moving from company to company over time to get pay progression.”

Roughly 40% of respondents said that they could probably earn more money by moving to another employer. Only 10% believe their compensation is much less competitive than what other employers are paying for the same work. Another 32% of respondents feel that their wages are somewhat less competitive, while around 35% confessed that their salary is probably on par with what other engineering employers are paying for the same role. 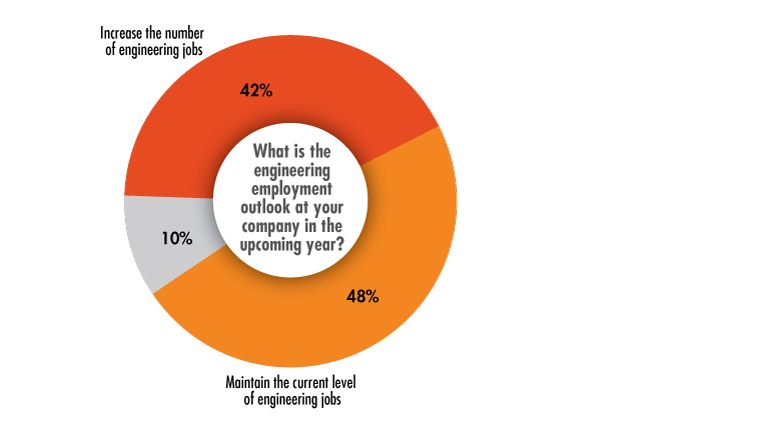 Close to 60% of respondents reported feeling content with their current pay. Among the respondents that feel undercompensated, more than half think that they should get raises of 10% to 25%. One-tenth of the respondents that feel shortchanged said they deserve a raise of 1% to 10% in wages. Others protested that they are severely undervalued and said their current rate of compensation is more than 50% out of line with what they deserved.

But there is also more to engineering than what it pays. Even though some said that they would not recommend it to a young person, more than 90% revealed they would. And even though the pressures of the profession are weighing on increases in overall pay, the intellectual challenges of engineering and other factors are raising morale. The apparent shortage of engineers tells them something else: their career is indispensable to the world at large.

“Even if the economy cools off, engineering will still be in demand,” said one respondent.