This article appeared in Evaluation Engineering and has been published here with permission.

Curve tracers are electronic test devices that are similar to oscilloscopes in many ways. Fundamentally, these instruments operate by varying a parameter, then measuring a separate one to produce data for analysis referencing the characteristics of semiconductors such as diodes, transistors, and thyristors. They’re particularly useful for semiconductor failure analysis and parametric characterization.

By 1955, when Tektronix introduced the industry’s first curve tracer, the company had already been producing oscilloscopes for nearly 10 years. Curve tracers were a logical extension of the oscilloscope business, approximating a power supply and an oscilloscope packaged in the same box. They work by applying a swept voltage to two terminals of the device under test and measuring the amount of current that the device permits to flow at each voltage level. The resulting I-V graph is then displayed on a scope display.

The first curve tracer, the 570, was introduced to display characteristic curves for vacuum tubes, followed over the years by models for testing transistors, diodes, and other solid-state devices. Tektronix curve tracers such as the 576 and 370A/370B went on to broad industry acceptance until production eventually stopped in the mid ‘80s.

Continuing with the Classic

Over time, curve tracers have gone to become more sophisticated, complex, and expensive for applications such as comprehensive semiconductor-device-level characterization. Meanwhile, classic curve tracers never stopped being useful, and have continued to remain in demand to this day, primarily for failure analysis and education applications. Their popularity is due, in part, to a simple interaction model that modern curve tracers have failed to replicate. Since they’re no longer being manufactured, the sustained demand has led to a robust market for used traditional curve tracers, with refurbished 370Bs for example fetching $20,000 or more in online auctions.

For labs that prefer to continue using traditional curve tracers, the reliance on vintage instrumentation presents its share of obstacles. Given the cost of usable old instruments, labs typically will share one unit across all of their failure analysis engineers. Keeping existing instruments functional requires sourcing and stocking old replacement components, and the rather large footprint consumes limited lab space. And since the storage device is a floppy disk (remember them?), capturing and sharing data can present a challenge.

Recognizing the ongoing interest in traditional curve tracers, the Keithley division of Tektronix has introduced I-V Tracer software to bring many of the features loved in classic curve tracers to a modern instrument, namely Keithley SourceMeter Source Measure Units (SMUs). Since an SMU can source voltage or current while measuring voltage and current, it has similar hardware qualities to a curve tracer.

The new software leverages the touchscreen interface of 2400 Series Graphical SMUs (Fig. 1) to re-create the familiar user experience of a curve tracer for low-power two-terminal devices. I-V Tracer uses the full capabilities of supported SMUs, including the dual high-speed digitizers of the 2461 for example, to perform tracing with AC polarity and pulsed DC, in addition to standard DC polarity. This maps to the 576, for example, that had +DC, −DC, and AC polarities, which means the output is either +voltage, −voltage, or both + and − voltages.

Rather than pooling resources for shared, outdated equipment, labs can now equip individual engineers with their own I-V curve tracer. Keithley SMUs are portable and fit easily on testbenches, as shown in the comparison with a 370B (Fig. 2). Moreover, users still have all of the source, sink, and measure capabilities of Keithley SMUs with curve-tracer functionality a click or tap away. It’s also easy to export curves or screenshots, and there’s no need to scour online listings for spare parts. 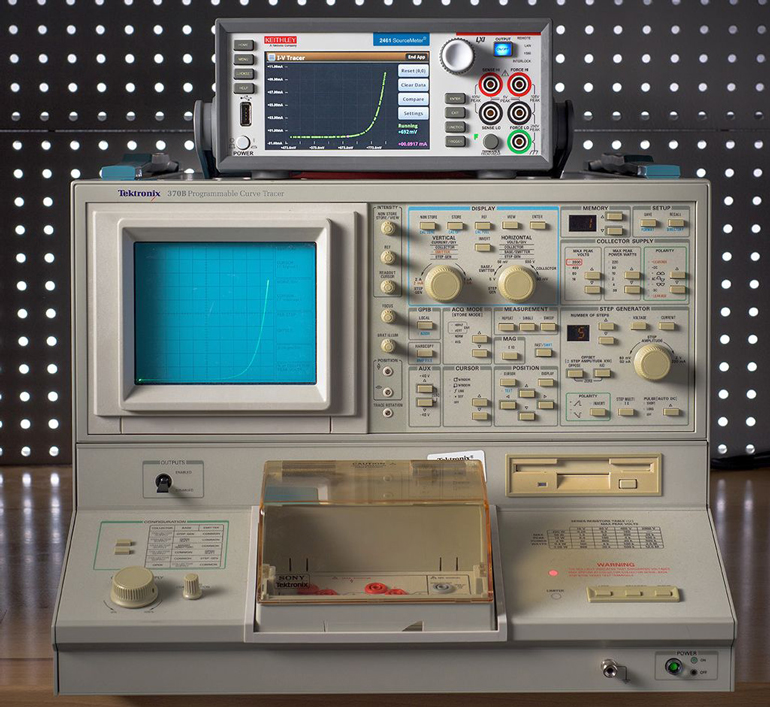 2. An SMU with Keithley I-V Tracer software is a fraction the size of a classic curve tracer.

For failure analysis of semiconductor devices, curve tracers are so popular, in part, because they provide precise control and immediate results. If you source too much power through a device, it’s possible to destroy the sensitive evidence that points to the root cause of failure. I-V Tracer simulates this functionality by providing direct control over the output level, letting failure-analysis (FA) engineers slowly ramp up to an I-V curve anomaly then seamlessly creep into the behavior, with a minimum of 500 nV (or 500 fA) resolution on the sourced output.

In addition to failure analysis, curve tracers have long been considered a must-have in engineering classrooms for their simplicity in allowing students to directly apply their learning to electrical devices. I-V Tracer with an SMU offers the same benefit, giving real-time, direct control to students, allowing them to experiment themselves and solidify understanding on a wide range of electronics.

Priced at $1,499 plus the cost of the SMU, the I-V Tracer offers a cost-effective way to gain the usability benefits of a classic curve tracer without the burden that comes with trying to maintain a vintage instrument. For more information, go to: tek.com/keithley-i-v_tracer.