How to Select a Fuse

It’s easy to trivialize the need for a fuse and how to select one. We have all been annoyed or exasperated by a blown fuse. Sometimes we wish there was no such component needed for our circuits. With the advent of electrical distribution in the 1800s, fuses became an essential device in preventing fires. Electrical systems need them for the same reason. Electronic systems have the same fire concerns and they need fuses as well (Fig. 1). Fuses will also prevent lethal voltages from shocking users.

1. Fuses protect users from shocks and products from catching fire. While this PCB has failed, it didn’t start a fire. (Courtesy of flickr, UnknownNet-Photography)

Some anonymous wag came up with the aphorism, “A twenty-dollar transistor will always blow to protect a ten-cent fuse.” A fuse isn’t intended to protect a transistor. It would be even less suited to protect a laser diode, since those get ruined with a few nanoseconds of overcurrent.

Fuses are ideal to protect wires and printed-circuit-board (PCB) traces from melting and fire. This can happen when shorts develop from abraded wires or magnet wire getting shorted from vibration and constriction due to ac magnetic fields. Another common failure is from electrolytic and tantalum capacitors, which can fail in a short-circuit.

Rather than counting on a fuse to protect your transistors, you can power the circuit you’re developing with a laboratory power supply and set the current limit to an ampere or so. You want to set the current less than what would melt a bond wire inside the transistor or IC. Then your misbehaving circuit will just get hot, instead of blowing up. After you get things working, you can then design in a fuse.

The Need for a Fuse

Anything powered by a low-impedance source needs a fuse. This could be a product that plugs in the wall, or is powered by a battery, or one that runs from the alternator in your car. The low-impedance source will provide plenty of current that will melt copper and start a fire (Fig. 2). Underwriters Laboratories was started to help insurance companies reduce their fire insurance risk. A fuse can protect people from a shorted voltage to the case, as well as keep a product from catching fire. 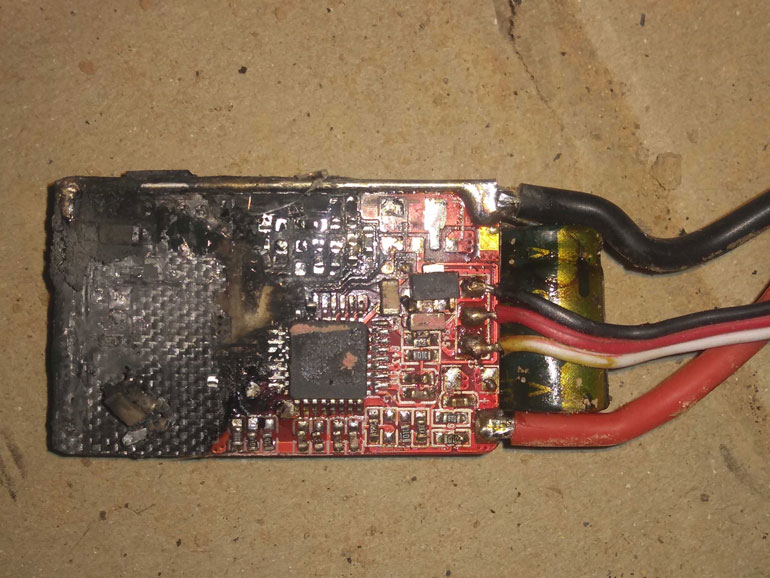 2. This PCB was improperly fused. A fuse should have blown long before this much energy was consumed, starting a serious fire. (Courtesy of Wikimedia)

Like most things, your application will determine the kind of fuse you will use. You might need a high-voltage fuse. If your product is primarily sold in the USA, then a conventional 1/4-in. fuse might be appropriate. In Europe, the 5- × 20-mm glass fuse is common. For automotive work, blade fuses are used all over the world. An electrical distributor can steer you to the right type of industrial fuse. If you’re protecting traces on a PCB, surface-mount fuses are ideal (Fig. 3). 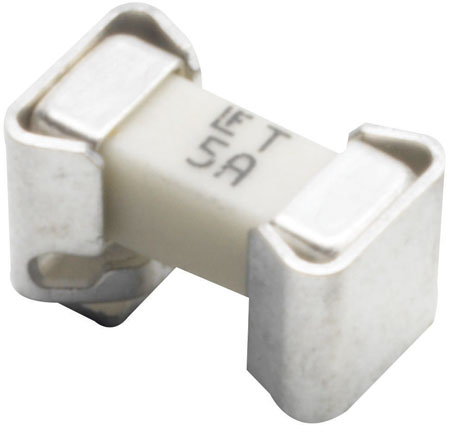 3. You can solder some surface-mount fuses right onto your PCB. This one has small clips that decouple the soldering heat from the fuse and provides for easy fuse replacement. (Courtesy of Littelfuse)

Oftentimes, you simply need to look at similar products to yours and see what kind of fuse they used. As my mentor used to say, “It’s not copying; it’s making use of the prior art.”

Once you have established the package of the fuse, perhaps in conjunction with that effort you should decide on the speed of the fuse (Fig. 4). A fast-blow fuse will open quickly, before wires or traces or devices get too hot. Yet a fast-blow may be subject to nuisance failure, due to momentary overload. 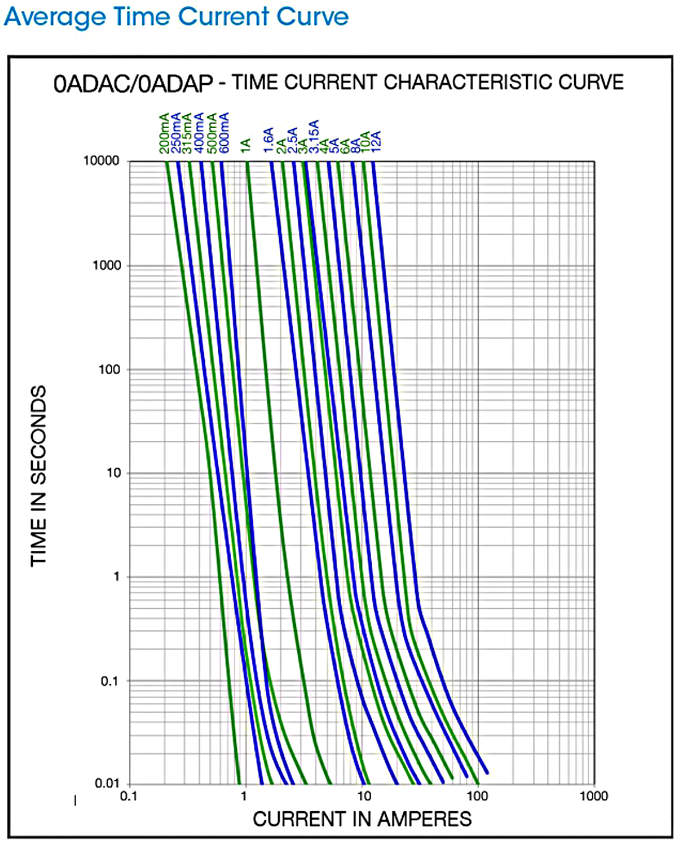 4. The time-current curve describes how fast a fuse will blow at any given current. It has a log-log scale. Note that a 1-A fuse will blow after 10,000 seconds with exactly 1 A applied. (Courtesy of Bel Fuse)

Incandescent bulbs, capacitive loads, and both linear and switching power supplies have a large inrush of current when you turn them on. What can be tricky about loads fed by ac wall power is that when you switch them on, the inrush might be less severe if you switched them when the input voltage just happens to be at zero volts. You have to consider the condition when you connect power right at the maximum voltage. That will create a larger, shorter current pulse that may open a fast-blow fuse.

I once designed an ultraviolet eraser for UVPROM wafers in a semiconductor machine. I knew that if the fuse tripped, that meant something was seriously broken; there would be no random trips, or so I thought. My mistake was to size the fuse too close to the expected load from the high-voltage linear transformer.

It worked fine in my lab, but when the marketing folks took it to Electronica in Munich, Germany, the machine was powered by 50-cycle ac. That lower frequency meant the transformer had more loss and drew more current. I had left so little margin, the fuse blew, right before the show. Fortunately, I had used 5- × 20-mm European fuses, so I told the show staff to go buy higher-current fuses locally, and take the cover plate off and pop in the fuses.

Unfortunately, despite explaining my mistake, the management insisted that instead of PCB-mounted fuse clips, I put in removable fuse holders on the outside of the box, which made a wiring rats-nest and complicated assembly. This is what happens when the marketing department grabs your prototype off the bench and takes it to a show. Thirty years later, I still resent having to remove the PCB-mount fuse clips.

While working at a semiconductor test company, I was called in to help with the standards for the facilities needed to power the tester. The previous engineer had over-sized the fuses based on the maximum potential current draw of hundreds of power supplies in the unit. I had to drag out the National Electrical Code and the regulations involving branch circuits to prove that the circuit breakers (or a fuse) are sized to the wire feeding the machine—not the never-expected maximum load that would never happen in real life. It saved about $10,000 in installation costs and made the customers quite happy.

Similarly, the home inspector for the house I recently purchased said the main-panel circuit breakers were too large for the 4-ton air conditioner. It’s the same issue—if the wires are thick enough for 70 A breakers, then it’s fine to use a breaker larger than what the air-conditioning unit needs. The fuses at the connection to the ac unit are sized to protect that load. You can plug a 2-A load into your wall outlet without changing the 20-A breaker in the panel for the lower load. The breaker (or fuse) is protecting the house wiring from catching fire. The 2-A product should have its own circuit protection for fire and shorts.

All this is to say that you should size the fuse based on stopping things catching fire, not a 10% value above the operating current. Measure the operation current at all conditions, and at all temperatures, and unlike me, at 50-cycle input frequency, if needed. Realize that any power system with a dc bus will have a large inrush current when first turned on. The fuse must withstand this, even if some child flips the switch a dozen times in a few seconds.

It’s conceivable that your fuse current rating will end up double or even 10 times the operating current. It’s your job to eliminate nuisance fuse operation, while making sure any failure or short will blow the fuse before starting a fire. As noted above, you might try a slow-blow fuse to get past some inrush current problem, while still protecting your circuit from fire.

To ensure that your circuit doesn’t melt or catch fire, it never hurts to put a fuse in the input. For large electrolytic capacitors, some inexpensive consumer products have undersized PCB traces so that when the capacitor shorts, the PCB trace melts, serving as a fuse. This isn’t the best solution, though, since copper has a high temperature coefficient, and the PCB manufacturing process doesn’t control the needs of your makeshift copper fuse.

You’re better off putting in small surface-mount fuses that have much more predictable operation. That way, when the technician replaces the shorted electrolytic capacitors, he or she can solder in a new fuse. With overnight shipping, the capacitors and fuses could be ordered at dinner time and arrive 10:00 AM the next day. Better yet, there will be no melted PCB traces. If they’re repaired with bus wire, then the fusing current will be much too high, and the product might catch fire the next time the electrolytic capacitors short out.