Our family of mobile apps is used by more than 2 billion people every month — on a wide variety of mobile devices. We employ rigorous code review and testing processes, but, as with any system, software bugs still sometimes slip through and may even cause our apps to crash. Resolving these crashes and other reliability issues in a timely manner is a top priority. To help us respond as quickly as possible, we have been creating a collection of services that use machine learning (ML) to aid engineers in diagnosing and resolving software reliability and performance issues. As part of this collection, we recently implemented continuous contrast set mining (CCSM), an anomaly-detection framework that uses contrast set mining (CSM) techniques to locate statistically “interesting” (defined by several statistical properties) sets of features in groups. A novel algorithm we’ve developed extends standard contrast set mining from categorical data to continuous data, inspired by tree search algorithms and multiple hypothesis testing. Our model is more than 40 times faster than naive baseline approaches, enabling us to scale to challenging new data sets and use cases.

Debugging field crashes is no simple task. Any system operating at scale must handle a substantial volume of bug reports every day. Our engineers use systems to monitor and triage the bug reports logged across all our apps. Debugging crashes is a manually intensive process that requires deep domain expertise and close inspection of trace and code contents, often under time constraints. When a mobile client crashes, the device logs a generated crash report. A categorizer automatically groups similar crashes together and generates a unique signature (SIG) for each group. Each SIG links to an internal issue tracker system, where developers monitor crash spikes, create tasks, and discuss issues.

Developers who are trying to resolve a group of crashes often want to know what distinguishes that group from others. For instance, does this group occur more often in devices with model X and build version Y? Or, does this group occur disproportionately for users from country A? In other words, developers want to better understand the cause and effect. To help engineers debug crashes, we extract anonymized features from the crash report, such as the device OS or the build number.

We want to generate insights that point to the root cause of the crash. One way to do so is to run standard statistical tests on sample distributions of features in groups of crashes. For example, we could test if crashes from country A are likely to appear more frequently in one group of crashes than in others. However, there are hundreds of possible feature-value pairs, and hundreds of thousands of valid feature combinations. It isn’t feasible to investigate all feature sets. Furthermore, our crash data includes many dimensions of features, with a mix of categorical, discrete, and continuous values. Common statistical tests don’t reveal patterns involving interactions with multiple features, which are valuable debugging hints.

CSM provides a scalable, robust way to generate human-readable insights on high dimensional crash data. The goal of CSM is to find statistically meaningful differences between groups. A candidate contrast set is a set of key-value pairs, where the key is a database field and the value is one of a range of values that field can take on, e.g., country=IN. Our CSM model takes in crash features as input, runs statistical analysis on hundreds of thousands of feature combinations, and outputs contrast sets for each group of crashes. 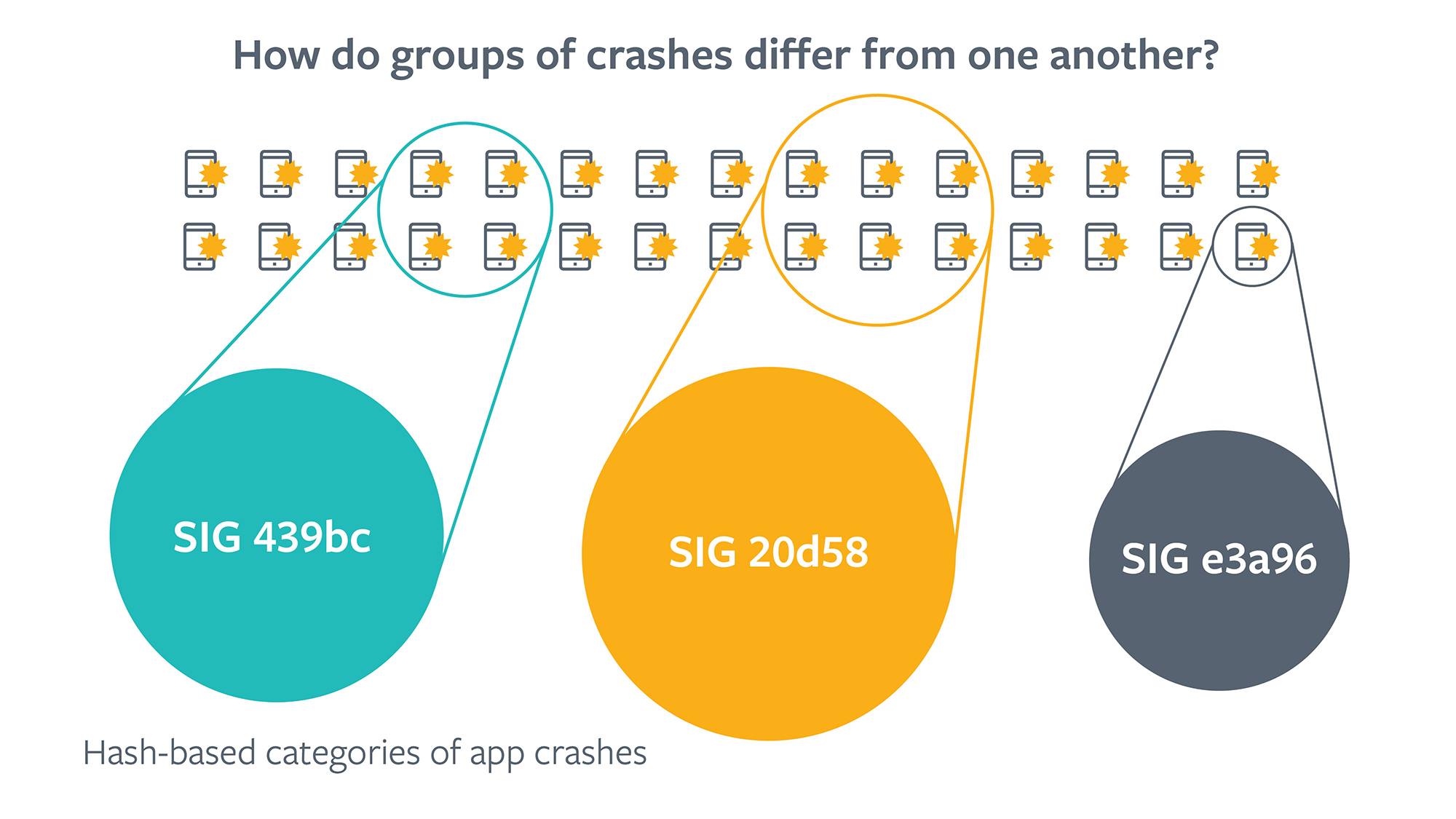 Where P(X|Gi) is the likelihood of observing set X for group Giand is the user-defined minimum support difference. Equation (1) tests a contrast set for statistical significance, and equation (2) checks for largeness, i.e., that the support of the contrast set differs by a certain threshold for at least two groups.

To efficiently traverse the search space of feature combinations, we cast the problem of mining contrast sets as a tree search problem. Starting with an empty root node, we enumerate all key-value pairs in the data set. Here are the initial candidates for an example data set with two columns (country, os_version) that each can take on two values. 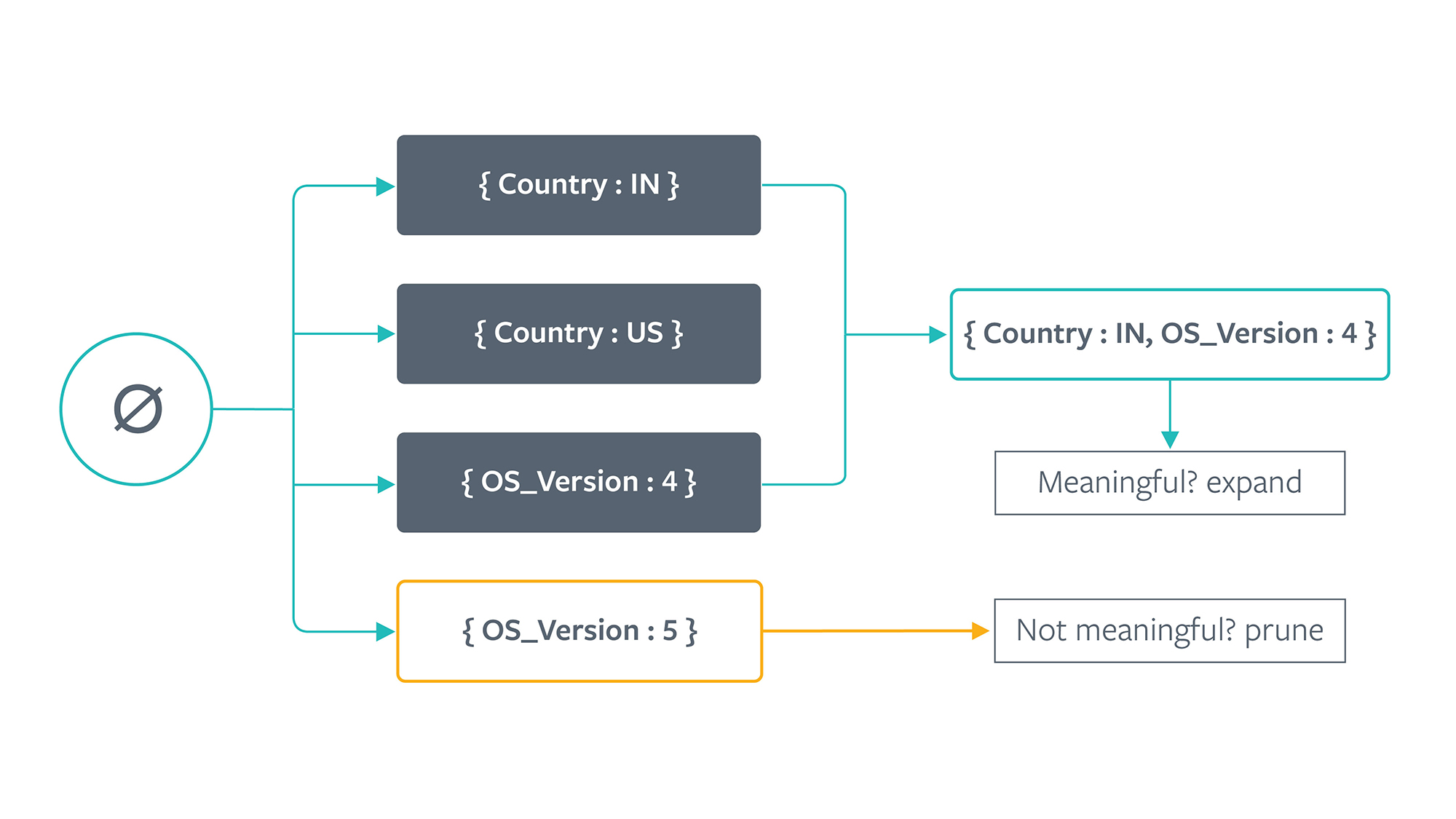 For each candidate node, we scan the data set and count the support for each group. We then examine whether the node is significant and large. In our implementation, a contrast set is statistically significant if it passes a two-way chi-squared test. The null hypothesis is that the support of a contrast set is equal across all groups, i.e., independent of group membership. The chi-squared test analyzes expected and observed frequencies, taking into account factors such as the number of observations, group size, and variance.

In addition to significant and large conditions, we implement several pruning techniques based on statistical properties and heuristics created by domain experts. We repeat the above process of testing and generating contrast sets until no new child nodes can be formed.

We first present a common crash scenario where we only have continuous features, and CSM fails. When an out-of-memory (OOM) error occurs in buggy code, the OS kills the app and does not have enough memory to snapshot a stack trace. In these cases, developers use navigation logs to obtain hints for debugging. A navigation log is a sequence of anonymized app surfaces that a user interacted with leading up to the crash. This is an example of a navigation log where the user transitioned from the Feed surface to Friends: 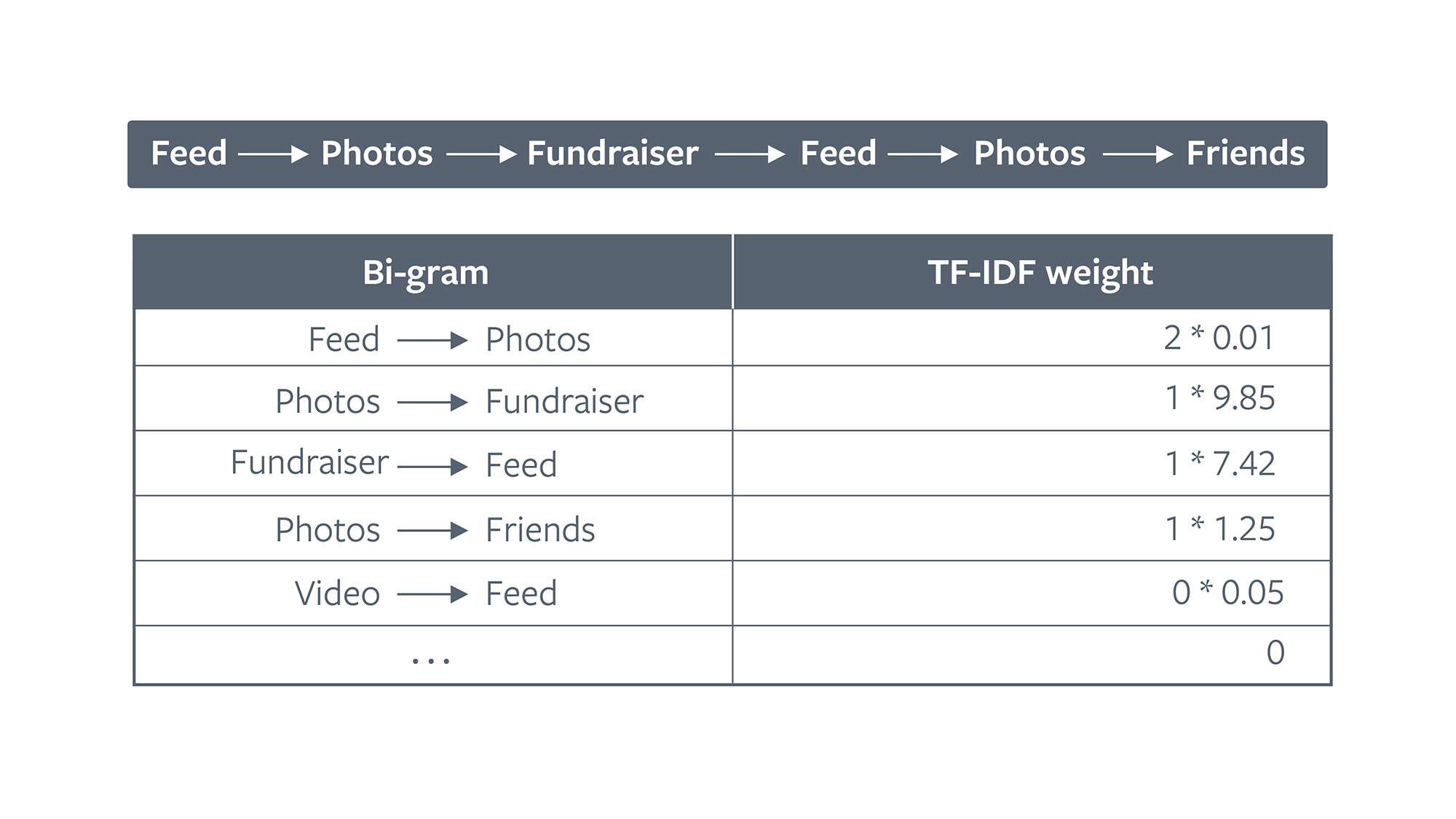 We extract bi-grams of source and destination endpoints of a single navigation event and embed them using TF-IDF. The TF-IDF weight of a bi-gram represents how often it appears in the entire corpus of navigation events as opposed to a particular log. A high weight for a bi-gram indicates that it is more important to this navigation log, i.e., less common in the entire corpus. Thus, each bi-gram in the corpus becomes a feature that can take on any positive continuous real value for each navigation log.

This gives us a way to measure bi-gram importances, but we still don’t know how to process these scores. The most popular way to deal with continuous variables is discretization, which buckets continuous data ranges into finite partitions. This has several drawbacks:

Let’s consider the following table computed for a group of crashes (group G) and a control group of navigation sequences for users who did not experience this crash. For each navigation sequence, we compare the mean importance score for that feature in group G with the mean score in the control group. Statistical testing revealed that {Feed → Photos, Photos → Friends} and {Video → Feed} are significant features for group G, but {Photos → Fundraiser} is not. This suggests that the issue is related to users interacting with the photos view. 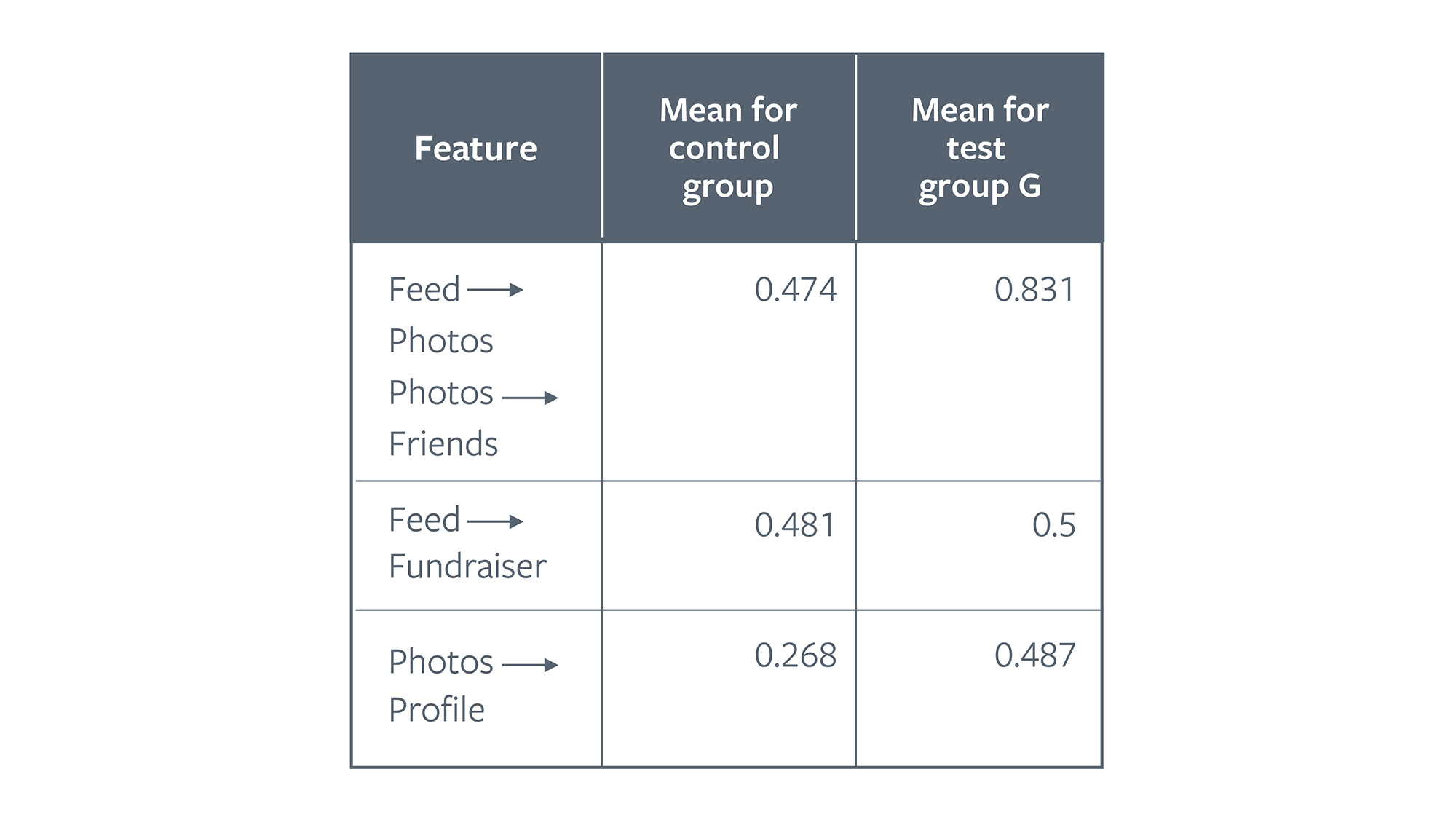 To improve usability, we define an anomaly score* used to rank contrast sets and a method to unify continuous and categorical contrast sets that mitigates bias. We also output confidence intervals to increase actionability for developers using our models.

* Based on Cohen’s d, a measure of effect size in the comparison between two means.

CCSM is able to process 60K crash reports in about eight minutes. This is over 40 times faster than simple discretization approaches, even with very few bins. CCSM has helped us surface important insights in a variety of situations, some of which are not possible to handle with standard CSM:

Continuous contrast set mining opens up exciting possibilities for automated analysis of large data sets. Looking ahead, we want to help diagnose performance issues that are more difficult to detect but that cause negative experiences for our users. We believe that, in the future, machine intelligence and automation will simplify large parts of engineering workflows, allowing engineers to focus on more abstract tasks.

We would like to thank Yang Yu, Wonhee Park, Phuong Nguyen, Rushabh Shah, Saransh Bansal, and Stephen Fink for their contributions to this work.